When students practice on manikins, someone has to direct the scenario. Enter the simulationist. 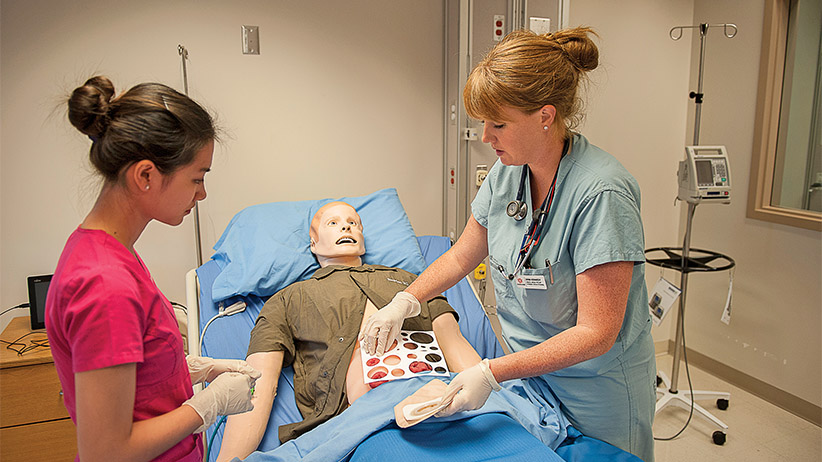 Christine Link sits inside a small room with two-way glass, watching a young woman in the classroom beyond. The nursing student seems unsure what to do with an elderly male patient in the bed in front of her. She lingers by the supply cart, as if looking for something. Link speaks through a microphone, which comes out of the manikin as a scratchy, old-man’s voice. She is playing the role of George, a grumpy senior with a respiratory condition. “Get me a drink of water,” commands Link. George has dirty tissues filled with fake mucus scattered around him. As the student fetches a cup, Link explains that she is waiting for the perfect teaching moment. “I would have the student hold it up to my mouth, and that’s when I’d cough.”

Link, who graduated from the practical nursing program at Fanshawe College in 2007, returned to the London, Ont., school as a part-time lab technician the following year. After stints as an instructor, in 2013 she became the simulation technologist, now responsible for running 15 manikins, including eight adults, four infants, two children and one pregnant woman who can simulate both natural and C-section births. The school uses more than 100 different task trainers, models and simulators.

Link is one of a growing number of simulation experts working in medical, paramedic and nursing programs across the country. “Health care has really come a long way in how we teach and present material,” she says. “No longer are we injecting into an orange.”

At SIM-one in Toronto, a non-profit, national networking, training and R&D organization with 1,700 members involved in health-care simulation, CEO Timothy Willett says every college and university in the country has adopted the technique. In Ontario alone, 78 different programs and labs are using a total of 1,236 manikins and thousands more simulation tools.

Beyond that, simulators are a big part of hands-on education in everything from police training to marine navigation and crane operation, as well as in other health-related disciplines like paramedicine and chiropractic. “The simulationist role is a very collaborative, creative role,” says Willett. “There are people who kind of fall into that role from paramedicine, from respiratory therapy, and then there are some who have a more technical background,” such as audiovisual or engineering fields.

SIM-one offers several online and in-person courses, including the brand-new 12-week Simulation Scenario Writing, Roleplay Theatre and Simulation Wizardry. They also train experienced simulationists to run their own courses, and each year about 15 to 20 are certified as simulation educators after they have completed three courses at a total cost of about $2,000. “As far as I know, there’s no kind of college programs you can go to with the intent of getting into that role,” says Willett.

Companies like Laerdal Medical—a Norwegian company that started out making toys in the 1940s before branching into CPR dolls and, eventually, patient simulators—are also beginning to provide courses. “The training side is what we’re seeing as having enormous potential and demand,” confirms James Buchanan, director of sales and business development for Laerdal in Canada. Not only does it supply manikins, resuscitation training and virtual simulation programs to schools like Humber College in Toronto, Dalhousie University in Halifax and the University of Calgary, it also trains clients on integrating the equipment into curricula, as well as how to service it.

Back at Fanshawe, Link spends most of her day in a small, spare office hidden behind the two-way glass in a corner of a room that looks like a hospital ward. Beds line the walls, occupied by various manikins. From a computer in her office, she can change vital signs, listen and talk through a headset, and watch the action from cameras mounted around the room. An instructor will often sit beside her, and they work together, assessing student reactions and changing the scenario to fit the lesson. “Having a nursing background allows me to respond to the students’ actions with the manikin,” she says. In health care, it’s important that students make mistakes here, rather than with live patients. Still, those manikin mishaps can be frighteningly real. “It really puts everything into perspective,” says Link.