Are all faiths treated equally when it comes to dedicated space on campus? 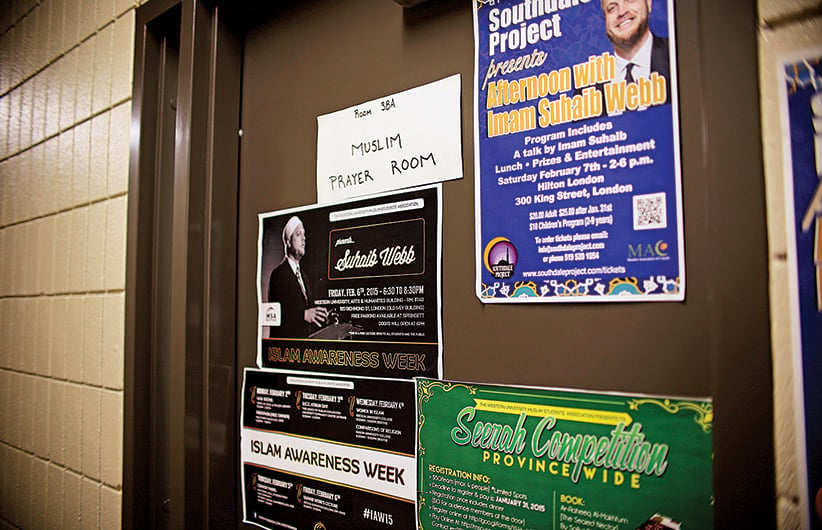 It’s mid-afternoon at McGill University in Montreal. Ahmer Wali, in his fourth year of medical school, has been studying at the library, and it’s time for him to pray again. As a Muslim, Wali must pray five times throughout the day. He could go to the small room in the basement of the student centre that the student union has partitioned as a makeshift prayer space for Muslim students, but the lineup will be out the door by now, and he wants to make it to his next class on time. So Wali finds a corner in the library that’s facing the correct direction, and politely asks the students sitting there if they would move to let him pray. “I have to do this often,” he says. “Most students are accommodating. But it’s not always easy to ask someone to move.” Last October, the McGill student newspaper published a photo essay of Muslim students praying under staircases, in storage rooms and in empty classrooms.

It wasn’t always this way. Muslim students had a dedicated prayer room until May 2005, when the university told them they could no longer use it. A lengthy conflict between the university’s Muslim Students Association (MSA) and McGill ensued. The students filed a discrimination complaint to the Quebec human rights commission. McGill argued it wasn’t required to offer dedicated space because it is a secular institution. The commission dismissed the complaint, and the Muslim students never got their room back.

The student union eventually helped by carving out a small space in its room, that fits fewer than 20 students. But now, Wali, also the president of McGill’s MSA, says the space problem is getting worse as the Muslim student population grows. He is renewing the fight for more space, in spite of an administration that is still set against granting dedicated space to religious groups.

Dozens of Canadian universities have dedicated Muslim prayer rooms, while others don’t engage with the issue at all. In a rare move, the University of Regina recently installed special sinks for Muslim students to use before prayer. But what works at one university might lead to tension at another.

Last November, the entire team of Catholic chaplains at Western University quit the university’s Chaplains Association, protesting the university’s decision to provide Muslim students with a new and bigger prayer room after the old multi-faith space, which included an area designated for Muslim prayer, was closed for renovations.

“What the university has created is a large space exclusively for the Muslim community, and a small room for the other faiths,” says Rev. Michael Bechard, who still leads the group of Catholic chaplains at Western’s King’s College. “I’ve been at Western since 2000, and twice a year we’ve been asking for more space,” Bechard says. “My issue is not with Islam or accommodation with the Muslim community. My issue is that, in accommodating them, it’s being done in such a way that ostracizes everyone else. It’s simply not fair.”

Then, in early January 2015, Rev. Michael Wagenman, a Christian Reformed chaplain at Western, resigned as coordinator of all university chaplains. Still a chaplain with an office in the multi-faith area, he says he speaks to students every day who are “bewildered this group is getting special treatment.” “Shared multi-faith space should be the first priority, not dedicated space,” he says.

But Western sees things differently. Susan Grindrod, associate vice-president of Western’s housing and ancillary services, says she’s not aware of requests for more space from other religious student groups. “We did not want to take space away from one group,” she says. “We have a large number of Muslim students . . . and this is a group that came forward and we tried to meet their needs.” She says other religious groups are welcome to book more space in addition to their multi-faith space. Neither the Muslim Students Association nor the Muslim chaplain at Western responded to requests for comment.

The University of Toronto’s approach to religion on campus lies somewhere between McGill’s and Western’s. While U of T has a multi-faith centre, a building with several rooms in which weekly discussions on faith and religious diversity take place, U of T does not provide designated space for any religious group. There are several multi-purpose spaces around campus that student groups, including religious ones, are responsible for booking. “We don’t expect students to park their faith at the edge of campus,” says Richard Chambers, director of the university’s multi-faith centre. “But we don’t privilege any particular group . . . that wouldn’t fly here.” Chambers has yet to receive a request from a single religious group asking for more space.

Back at McGill, Wali remains optimistic that the tide is changing there. “It’s an issue that will require patience and planning,” he says. “But catering to students’ spiritual well-being is important, and I hope that soon there will be a space that meets our needs.”