Anti-piracy firms are coming after you, and they’re mighty heavy-handed. Know your rights. 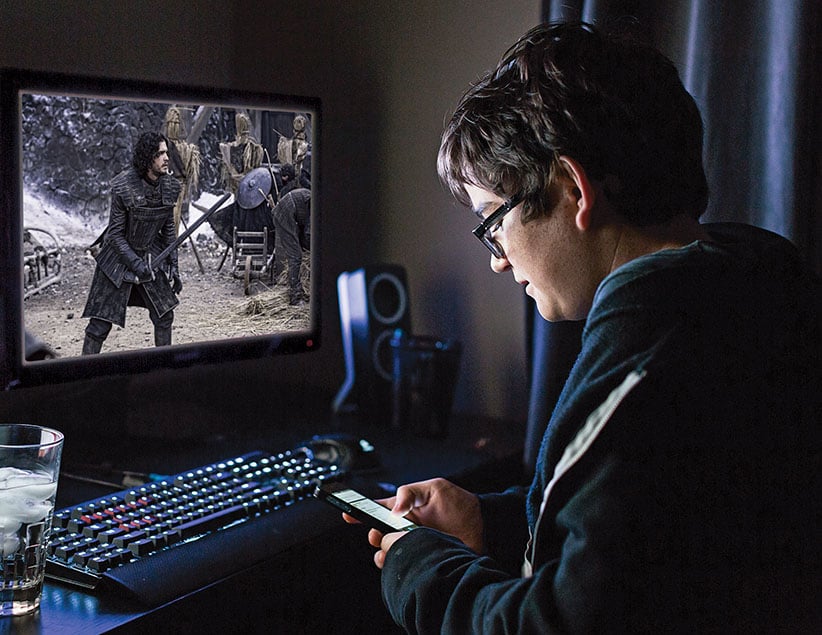 A student watches Game of Thrones on his computer. (Photo illustration by Levi Nicholson and Richard Redditt)

This article was originally published in November 2016

Despite the last season of Game of Thrones being just a few mouse clicks away, students looking to save a quick buck may want to think twice before pirating the popular fantasy television series while connected to campus WiFi.

Recent federal laws are forcing universities to forward thousands of copyright notices to students alleged to have illegally downloaded and shared copyrighted content such as music, movies and video games, even if critics say the notices appear threatening, misleading and can potentially put students on the hook for hundreds of dollars.

This “notice-and-notice” system became mandatory under copyright laws introduced in January 2015. Because universities provide services similar to those of commercial Internet providers like Telus, Bell or Rogers, they too are required to forward infringement notices to suspected pirates surfing on campus computer networks. If universities fail to comply, they risk being sued by copyright holders (movie, television, music and video game studios, for example).

The illicit infringers aren’t just misbehaving students. Many post-secondary institutions forward these notices to staff and faculty, as well.
But while film and television studios like HBO—the rights holder for the mega-popular Game of Thrones—use anti-piracy notices to inform recipients how to watch HBO programming legally, others use them as a means to recoup stolen profits. The controversial practice of offering an “out-of-court” settlement is where a notice recipient is invited to purchase the equivalent of a “Get Out of Jail Free card” to avoid legal action.

One of the anti-piracy firms seeking such settlements across the country is the Canadian Intellectual Property Rights Enforcement (CANIPRE). The Montreal-based outfit sent out more than six million anti-piracy notices to Canadians—including students—last year. Less than five per cent were sent to universities, but that’s still something close to 300,000 notices.

“We don’t discriminate. No matter if it’s a priest, a little old lady or a student. The only people who receive a notice are those involved in illegal file-sharing,” said CANIPRE director Barry Logan, whose clientele includes rights holders from Canada, the U.S. and Europe.

Anti-piracy firms like CANIPRE work by monitoring “peer-to-peer” (P2P) file-sharing networks for copyrighted content. P2P networks operate similar to a class project, where users “exchange” data with one another to obtain a working copy of the illegal material. CANIPRE scans for and collects any Canadian IP addresses (an Internet user’s footprint) sharing the file, along with data such as the date, time and operating system of the user’s computer. A copyright infringement letter is then drafted and sent to an Internet service provider, who then forwards the notice to its customer.

CANIPRE’s notices provide a “settlement opportunity,” costing $198. If paid, the notice reads, the recipient is released of all liability and won’t be subject to future litigation.

“I think that this idea of the student population being poor and living on Kraft Dinner is inaccurate,” says Logan. “No one is getting broke here for 200 bucks. You stole some s–t and gave it to someone else. Now own up to it. Theft is theft, is theft.”
While there is no fine for copyright violation in Canada, the law permits copyright holders to pursue up to $5,000 worth of damages against individuals suspected of non-commercial infringement.

According to Innovation, Science and Economic Development Canada (ISEDC), the intent of the notice-and-notice regime is to “discourage” illegal downloading.

“Receiving a notice does not necessarily mean that you have in fact infringed copyright or that you will be sued for copyright infringement,” says ISEDC spokesperson Hans Parmar, adding there is no legal obligation to respond to these notices or “pay any settlement offered by a copyright owner.”

Toronto intellectual property lawyer Ken Thompson says seeking a settlement offer is a “good compromise” compared to a lawsuit as the alternative. “There is nothing in the notice-and-notice regime that says you cannot ask for compensation,” he says. “It’s a nice, gentle approach that allows copyright holders to attempt to find a settlement without taking drastic measures.”

The problem is, not every anti-piracy firm plays by the rules. Several schools have expressed frustration with these “settlement offers,” claiming that some companies use the notices to intimidate and prey on students.

According to a report published in the University of Manitoba’s student newspaper, officials in the school’s copyright office have described some of the notices from U.S.-based studios as “tantamount to extortion.” Some of the worst of the roughly 6,000 notices that the University of Manitoba has processed since January 2015, warned of “multi-million-dollar lawsuits, the loss of scholarships, and even deportation for international students” if an immediate cash settlement worth hundreds of dollars was not paid.

Don Thompson, chief information officer at the University of British Columbia, says his office received 6,875 copyright notices last year. UBC is not permitted to amend the notices so the university attaches a cover letter that informs the recipient that his or her identity has not been shared.

Still, some students pay settlement fees out of fear of court action, Thompson says. “We have seen situations where the individual voluntarily pays but additional notices are sent in respect of the same alleged copying incident,” he says. “This, obviously, causes additional stress and concern over potential legal action.”

McGill was the recipient of 1,796 notice since last year. McGill spokesperson Chris Chipello says that many of these “often overstate the rights” of the sender and “request immediate payments of large amounts of money that may not be justified, without spelling out that people can challenge them.”

“Consequently, the university is concerned that these notices are unduly alarming, particularly since we are asked to send them to young adults who may not have access to correct legal advice,” wrote Chipello.

Fenwick McKelvey, an Internet researcher and assistant professor in communication studies at Concordia University, says he’s aware of cases involving pornographic film studios using the “salacious details” of their content to “effectively blackmail people into paying a fee instead of having to go to court.”

Campuses across the country have begun to introduce policies to crack down on unlawful file-sharing on campus. At the University of Calgary, students were warned to think twice before illegally downloading copyrighted content when classes kicked off in September.

“It is not okay and our campus community needs to be aware of the risks of engaging in that behaviour,” says provost and vice-president (academic) Dru Marshall in an internal campus publication. The University of Calgary was slapped with roughly 5,000 copyright-infringement notices “from a variety of sources,” a university spokesperson says. Although disciplinary procedures are in place, no students were punished in connection with the notices.

Some institutions have taken a proactive approach to infringers by throttling their networks’ Internet speed. This makes downloading large files on campus painstakingly slow.

Back at the University of Manitoba, officials are looking into the possibility of installing software capable of targeting illegal file-sharing completely. “We would not be able to filter all copyright-non-compliant material, but would likely be able to block a high volume, significantly reducing the number of notices triggered on campus,” says Naomi Andrew, the director of the university’s legal department.

The type and severity of punishment ranges, since students are caught illegally distributing everything from the latest Taylor Swift album to an entire season of House of Cards. Downloaders who violate file-sharing rules while residing at the University of Waterloo’s dorms, for example, receive a warning and can temporarily lose their Internet privileges.

A Reddit user who identified themselves as a former British Columbia Institute of Technology student, said they “had to write a 1,000-word essay describing all the rules BCIT has regarding copyright infringement to keep my Internet” after getting caught illegally downloading on two separate occasions. Citing student privacy, BCIT declined to comment specifically on whether it assigns essay writing as a form of punishment.

Lawrence Dobranski, who oversees information technology security and compliance at the University of Saskatchewan, says students are sanctioned only if there have been multiple infractions or in cases involving inappropriate content, such as pornography.

“I don’t think we’ve had any repeat offenders who have crossed the line. But I can think of one serious-level case where a student was referred to counselling based on the type they were sharing,” says Dobranski, whose campus received roughly 2,000 notices last year. “People get awfully scared. Usually they clean up once they realize we now know.”

Administrators at McGill say it’s “unlikely” that the school would sanction students, unless they were “somehow harming or overloading the university’s information systems” or in breach of student conduct.

Says Chipello: “The university is not the judicial system.”