Students of colour on connecting with their cultures on campus

The years students spend in university can be both overwhelming and eye-opening. Students feel the weight of adult responsibilities but also explore the freedom to build new social circles. For students of colour, these changes are often intensified in complex ways by factors such as race, culture and identity. Going to university can mark many firsts for POC: the first time they decide to explore their cultural backgrounds, their first exposure to ideas or opinions that make them feel vulnerable or maybe the first time they’ve met young people like themselves.

Maclean’s spoke with seven racialized students about how they navigate the new terrain. 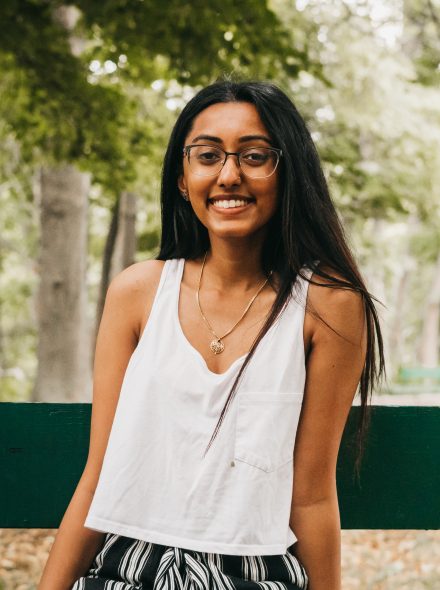 “When I was younger, I didn’t want to be brown. When people would ask me where I’m from, I’d say, ‘Oh, I’m from Canada,’ ” says Shuruthii Thiya. In high school she met more South Asian students, so she felt a little bit more comfortable, but it wasn’t until she moved away from Toronto for university that she realized there was nothing wrong with who she was. “I got involved in the Tamil Students Association. I had more exposure to people like me, things related to my culture, and things that I wouldn’t have done while I was at home because I was embarrassed by them.” 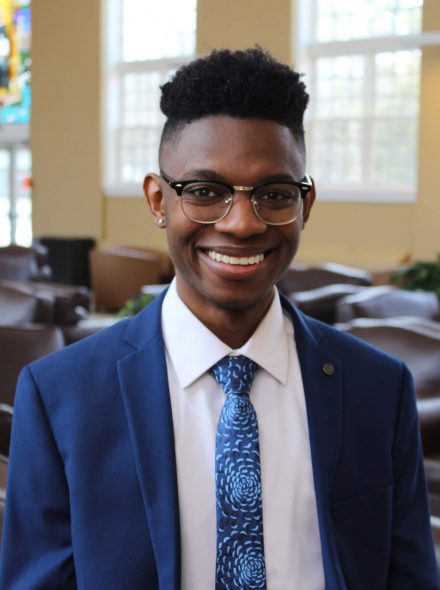 After moving to Atlantic Canada, Jamaican international student Husoni Raymond had an eye-opening experience. “At first I was very self-conscious that I was different in this space. I was surrounded by my entire culture growing up,” Raymond says. “But now I have made different connections within the black community here. And it has really given me self-awareness of who I am and [made me embrace] my blackness.” For instance, when Raymond discovered the absence of Black History Month celebrations on campus during his first year, he brought the issue to the school administration. Now there are celebrations every February. Today, three years after starting at the school, Raymond is the president of the school’s student union and vice-chair of the New Brunswick Student Alliance, and works constantly to help St. Thomas University become more multicultural.

When Melo was five years old, her family moved to Ontario from Zimbabwe. Going to a private school while growing up, she did not feel connected to her roots at all. “I was the only black student in my grade and two grades below me,” she says. Going to Carleton University changed her perspective in several ways: she was introduced to the Black Student Association, courses such as African Studies, and other black students who became friends. When she went back home for the first time, her parents told her she seemed different. “I’m more out there, and I’m more confident in some ways,” says Melo. “I never really hung out with other black people, and being in a group where everyone’s the same colour as you is a different experience. It’s pretty cool.”

*Melo does not want to include her last name. 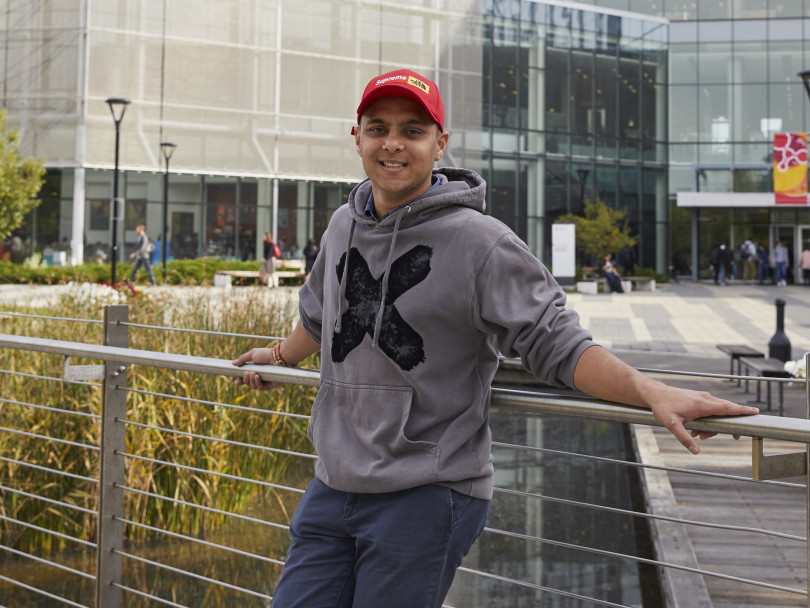 For Aum Raval, a lot of his Hindu traditions feel diluted by Canadian culture, but his university experience has pushed him to further explore his family’s culture. “When I got to university, I saw students in the same situation. [They] didn’t fully relate to the values and customs in India.” Within the University of Calgary’s racially diverse campus, Raval has become acquainted with students who are passionate about where they come from. “They don’t just ​do​ a tradition; they want to ​explain​ why they do it,” he says. Now he can discuss the true meaning of traditions such as Holi and Diwali, and has learned about other cultures too. “It’s good to know that other students like me are also being educated on what their traditions are and what they symbolize.” 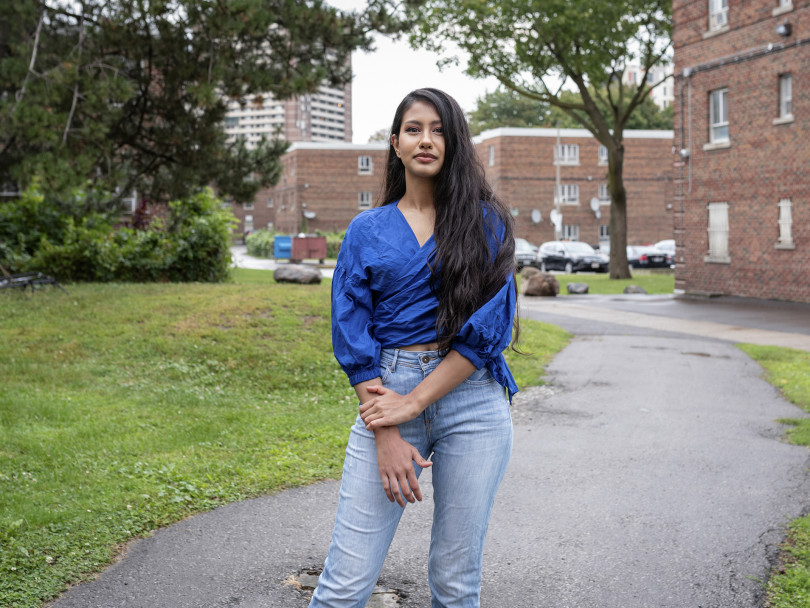 Hoore Jannat, in her Regent Park, Toronto neighbourhood, where she grew up and still lives. (Photograph by Lucy Lu)

“When I first came to university, I really realized my lack of privilege,” Hoore Jannat says. “I knew I came from a marginalized background, but I didn’t know the extent of it.” Jannat was born in Bangladesh and grew up in Toronto’s Regent Park. Before starting university, she hadn’t really communicated with young people from outside her community. One difference she’s found is that most of her peers in her program come from wealthier family backgrounds. “Even when other students do have compassion for the issues that are happening in the world, they present them in a ‘saviour’ type way. The way they talked about my community felt like I was just an experiment to them.” Jannat hopes to change the world by tackling the institutions that create systemic inequities. “The world is run by people that all think the same and all look the same, and there needs to be more diversity in that sense.” 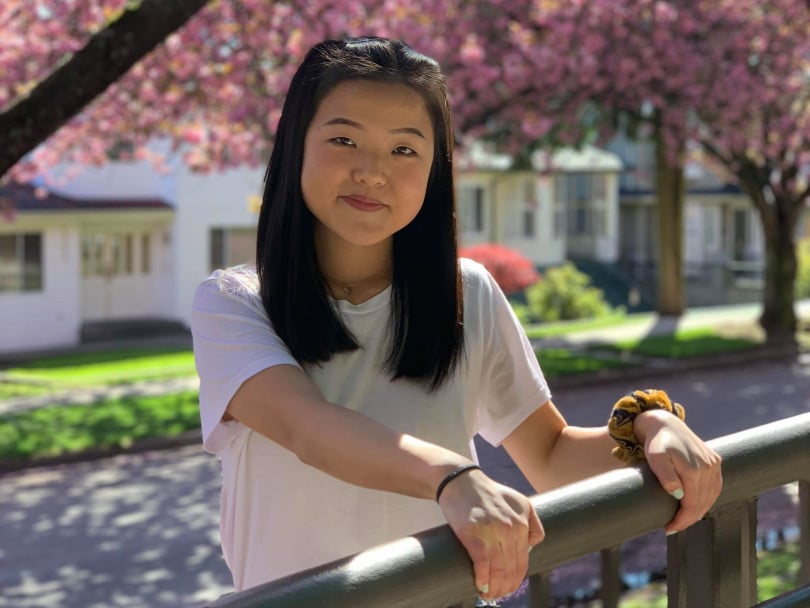 Xuedan Xu was born in Beijing, China, but grew up in Vancouver and didn’t feel pressed to explore where she comes from. That is, until she went to university. “Once I came to UBC, the biggest thing was being thrown into a place with people of different cultures, religions—different everything,” Xu says. “I met a lot of students who weren’t Asian but were from other international schools, and because they had such strong ties to their cultures, I gravitated toward that.” In her second year, Xu decided to visit her extended family in China for the first time in 10 years. She’s even started to feel closer to her parents. “My parents immigrated here when they were in their 30s, and the way I grew up is so different from how they grew up. Exploring my roots and being curious about that stuff gives me something to talk about with my parents,” she says. “And I hope it makes them proud that I’m also proud of where I come from.”

Gideon Maharaj has been well connected to their roots since they were a child (Maharaj uses the pronoun “they”). A mix of Indian, Nepali and Fijian ancestry, Maharaj’s first memories are of doing Puja, a Hindu act of worship, with their father. Growing up in Greater Vancouver, Maharaj met only two people with the exact same ethnic background, so they constantly feel the need to educate themselves in that history. In university, Maharaj realized there is no academic research on their community, nor is there a lot of open-mindedness when it comes to other cultures. “In one class, we were discussing baptism rituals in medieval Europe, and then we started talking about the other students’ traditions,” Maharaj says. When Maharaj explained their family’s Indo-Fijian tradition of shaving heads after six weeks and throwing the hair in a doughball into the river, “people thought that was strange and barbaric.” Maharaj thinks that a good university should be “more accepting of people’s diverse experiences” and fights for that acceptance every day.