Across the country, university residences are upgrading to bigger beds to stay competitive 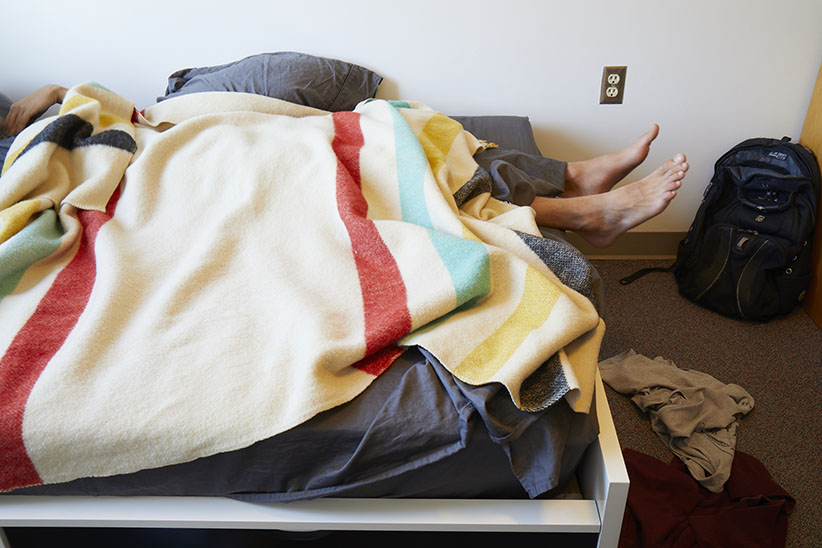 A student’s feet hang off the end of his bed. (Photograph by Reena Newman)

There are so many tricky firsts for newly minted university students that a nice, extra-long bed “is a great, homey touch,” says Kevin Koudys, a residence community adviser at Carleton University. At six foot two, he is longer than the standard dorm bed himself. “It demonstrates that the school cares about the little things that add up to your whole university experience.”

Koudys lists off the challenges facing frosh: “transitioning from home to school, taking on new pressures and school work, making new friends, coming out of your shell.” The 22-year-old, who lives and works on the Carleton campus while taking his master’s degree in sociology, spent the summer giving dorm tours to parents prowling about with tape measures. He came to the conclusion that “parents really care about where their children are going to be sleeping.”

Thus the trend toward the latest university perk: the extra-long bed. Across the country, from Memorial University to the University of Victoria, dorms are steadily increasing the length of their bedding stock, from the previous standard 72-inch-long twin to an elongated 80 inches—that’s six feet eight inches. Most institution websites detail residence amenities and indicate whether they offer an XL bed option. But are kids really as tall as we think, or are they just spoiled by Posturepedic-positive parents?

If you crane your neck looking up at this year’s crop of frosh, you would be forgiven for thinking that we are growing them extra-tall these days. Almost all will have stopped growing by the time they are 18 and starting out on their post-secondary journeys. The endocrine outliers, the tallest of poppies among us, do seem taller.

It is true that the average heights of Canadian men have risen substantially since the beginning of the First World War. In July, eLifeSciences.org published a paper by a group of international health scientists who collaborated on “A century of trends in adult human height,” where they crunched height data collected from 15.4 million people born between 1896 and 1996 in 178 countries. Canadian men today average five foot 10, up from five foot seven 120 years ago; Canadian women average five foot four, up two inches over the same time period.

Our gain tapered off several generations ago, while much of the rest of the world has been playing catch-up. There is a plateau of heights, and we have reached it for now. Any significant height gains over the past couple of generations is more imagination than fact, says Dr. Daniel Metzger, a clinical professor of pediatric endocrinology at the University of British Columbia. “I’ve not seen anything published about a secular change in kids’ average heights since, like, the Second World War.”

So universities responding with bigger beds are doing so to stay competitive. “The quality of residence is an important decision-making factor,” says Andrew Parr, the managing director of student housing and hospitality services at UBC. The school made the decision to go to XL beds about 20 years ago, and the transition is mostly complete, save for beds in particularly odd, older room configurations.

Laura Storey is the director of housing and residence life at Carleton University in Ottawa. A tall person herself, Storey remembers trying to get a longer bed when she was an undergrad in the late ’90s, to no avail. So she was pleased by Carleton’s similar across-the-board decision to increase dorm beds to the XL format. “We are just finishing up the transition, which began in 2011. We have started putting in 80-inch beds everywhere we can as we felt it would be a great draw for students.” It took that long to upgrade 3,600 beds across 11 buildings.

Are they comfortable? Storey says she slept on one and reports them to be “totally fine.” Koudys says that he, as well as many of his charges, have invested in mattress toppers to add cushioning to the greater lengths. “After all, you are probably used to your pillow top at home,” he says of his queen-sized bed in Smithville, in the Niagara region.

Koudys says that, with first-years, parents most often buy that first set of sheets. Later students take to the Internet to solve sourcing problems: Online forums show Bed, Bath and Beyond is a popular choice for dorm-dwellers looking for a guaranteed XL fit.

Happiness is indeed in the details when you are learning to live on your own, says UBC’s Parr. Plus, he says, XL beds have another, less immediately obvious, benefit. “Kids need the longer beds to make enough room for their stuffies.”