The pandemic has ramped up students’ money woes

There are no jobs. But there are bills to pay. And there are online classes to attend. Luckily, there are some lifelines. 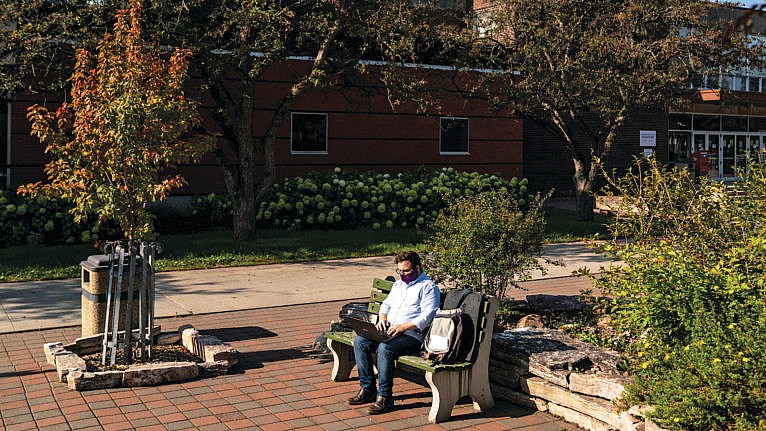 Consider the undergraduate student in Orillia. Spring midterms have just wrapped up at Lakehead University’s southern Ontario campus. It is time to start looking for a summer job to cover living expenses. Unlucky for the student, who already relies heavily on provincial loans, it is March 2020 and the world is about to turn upside down.

There are no jobs. But there are bills to pay. And there are online classes to attend.

“I really debated whether I was even going to be able to go back to school,” says Brandon Rhéal Amyot. “I’m the first in my family to go to school, and at the rate things are going with our system, I’ll probably be the last.”

The hardships created by the pandemic have worsened issues that affect access to affordable post-secondary education, especially for economically disadvantaged students, says Amyot. They are halfway through a degree in interdisciplinary studies and specializes in political science and media.

Government support wasn’t enough to keep Amyot from taking on excess debt this year, or to keep other students from dropping out altogether. “Really, it’s not like I got ahead. There’s this image that students were throwing around money, having fun. I can promise you: living in a pandemic and being a student by myself was not fun.”

In a flurry of emergency spending, Prime Minister Justin Trudeau announced a slate of programs for students worth some $9 billion in late April. From May to August, the $1,250-a-month Canada Emergency Student Benefit (CESB) was available to Canadian students not eligible for employment insurance or the $2,000-a-month Canada Emergency Response Benefit (CERB). The feds also expanded summer job, student work placement and research grant programs, and put a six-month moratorium on debt repayment for federal student loans.

Within that $9-billion envelope, $912 million was reserved for the Canada Student Service Grant—a program that unravelled shortly after its announcement because of the political controversy over its planned sole-sourced delivery by the WE Charity, an organization with ties to the Prime Minister. It would have offered grant money to students for completing a set number of hours of volunteering. Students would have earned less than the equivalent of minimum wage, receiving $1,000 grants for each 100 hours of service, up to a maximum of $5,000.

The office of Employment Minister Carla Qualtrough indicated that a decision about that money hasn’t been made yet. “The government remains committed to supporting students, and continues to look at options on how best to proceed. More information will be provided as soon as it is available,” read an email from the minister’s press secretary.

By early September, the CESB had been accessed by nearly 700,000 post-secondary students, according to a government news release. Although the CESB itself has not been renewed, fall measures worth $1.9 billion include a loosening of eligibility requirements for Canada Student Loans and Canada Student Grants, a doubling of those grants to $6,000 for the school year and yet more money for work placements.

That grant is a big help for many students, but still feels small when average tuition costs in Canada are $6,800 a year, says Nicole Brayiannis, the national deputy chairperson of the Canadian Federation of Students. The tuition fees don’t include textbooks or internet access, let alone rent or food. Some 75 per cent of students surveyed by the federation in April reported that their summer employment opportunities were either reduced or non-existent.

“The common sentiment among students was that the support just wasn’t adequate, wasn’t meeting the needs, or some students were being completely left out,” says Brayiannis. She also noted that there was no support for international students, except an increase in the number of hours they are allowed to work in Canada while studying.

In Halifax, some, especially international students, are relying on food banks and have crowded roommates into too-small apartments, says Isa Wright, who is in her last year of a bachelor’s degree in social work at Dalhousie University. For those who had access to the CESB, the $1,250 a month would barely cover the costs of living, says Wright, who is the vice-president of finance at the Dal student union. Let alone tuition.

The financial stress has created what Wright calls a social polarization between employed and unemployed students, those who are receiving benefits and those who aren’t.

Students who worked over the summer of 2020 will bend over backwards to describe how incredibly fortunate they feel. They come across as bashful, almost apologetic, for having managed to earn wages at all, even when their families’ and their own finances have been compromised by the pandemic.

Jeffrey Stephen, a second-year student in business administration at Wilfrid Laurier University, had planned to look for a restaurant job this summer. Instead, he wound up with a gig at a golf driving range owned by family friends. It has helped him pay rent at the Waterloo apartment he’s sharing with three roommates—they couldn’t get out of the lease they’d signed just before the pandemic.

“I was extremely lucky to actually get a job,” he says. And still: “Finances is something I think about all the time.” Food. Rent. Economics homework. Utilities. Food. Rent.

For students not as lucky as Stephen, government supports have been a lifeline. Still, the overall mood on virtual campuses across the country is anxious. “A lot of what has affected the financial strain and sense of stress among students is that there are gaps between programs, and gaps between updates,” Wright says.

What will happen after this fall? What will happen next year? Will the post-midterms summer job search be as devastating? Students interviewed by Maclean’s express some optimism about the likelihood of more government support, but much pessimism about the pandemic—and the affordability of university in the first place. For now, it’s one bill payment and one online class at a time.

This article appears in print in the 2021 University Rankings issue of Maclean’s magazine with the headline, “No jobs. No money. No school?”