The part-time conundrum: An undergrad degree shouldn’t be a race

Part-time studies are a useful option, but in these competitive times, dropping courses still carries a stigma 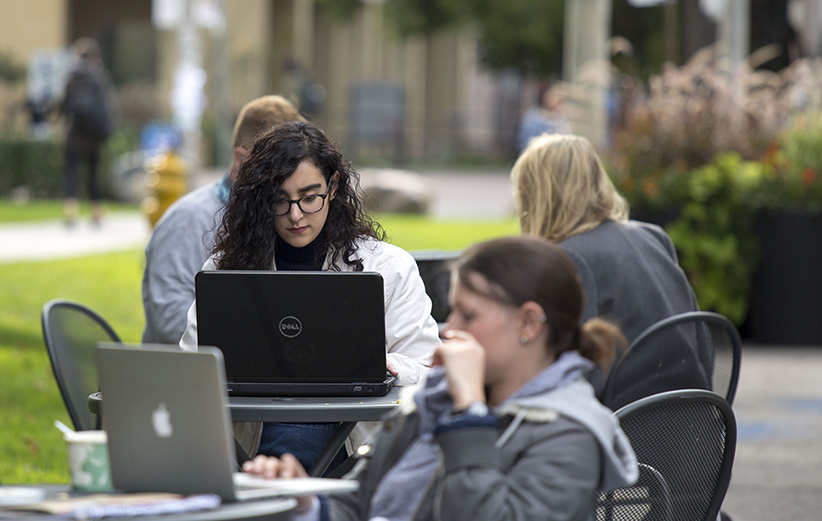 Slow and steady: Amanda Ghazale Aziz says we live in the age of the super student (Photograph by Nick Iwanyshyn)

There are myriad reasons why a student chooses part-time studies, and they all carry their own stories: You don’t have enough money; you struggle with anxiety or a family crisis; maybe you identify as disabled; maybe you are dealing with how you identify.

I’m a woman of colour who comes from a low-income family that have been refugees for two generations (my grandparents were refugees from one country in the Middle East to the next, escaping civil wars). I’m also a student with a mental illness who works, who sometimes has to send money to help out my family, and who had to drop courses in order to find that right balance.

My switch from full-time to part-time studies at the University of Toronto may sound extreme, but it’s not an anomaly. Even for full-time students, there is a trend of taking “the fifth year” in university. That neat little package of four years isn’t the norm anymore.

To an outsider, a part-time program may seem like a great idea. But it carries a host of issues, not the least of which is stigma. Peers might think you don’t have the smarts to complete your education on time, or that you are lazy. We know that’s not the case, but that stigma makes students hesitate before considering a lighter course load.
My story? I signed up for five courses in my second year of university, worked two jobs and participated in three extracurriculars. One morning during exam season of the second semester, I caught myself staring at a blank document on my laptop. I hadn’t slept in two days. I had finished a box of tissues because my eyes wouldn’t stop brimming with tears. What happened next: I broke down, desperately emailed my registrar to save me, and slept for 18 hours.

A week later, I was registered as a student with accommodations for my anxiety disorder under accessibility services. That means getting such accommodations as a separate room to write exams, or getting a signed note to send to professors explaining why I might need extensions, should I ask for one.

I ended up finishing that school year with one job, and quitting one extracurricular so I could focus on the others. When I told some friends at the end of my second year that I would be studying part-time, they took it as if I had made the decision to become a slacker.

Everybody’s experience is different and personal. For me, one of the harshest realities was getting screwed over during course selection period. At my big-city university, those who have the most courses under their belts—which usually means those going full-time—have priority during registration. It was a battle to get into the courses I desired because they would be filled by the time I had the chance to enrol.

Another difficulty: Despite the population being diverse at my university, I feel the structures within accessibility services still cater to the white, middle-class student milieu. Even if not, they lack sensitivity. I’ve been told by countless administrative workers in counselling services to just quit working (to focus on my studies). As if I can.
We live in an age of super students, where a bachelor’s degree isn’t enough anymore. More degrees. More extracurricular activities. More. More. More. Multiple cups of coffee later, and those bloodshot eyes are a badge of honour. Campus culture can get so competitive, my peers will do a string of all-nighters rather than go to the registrar to even discuss the option of dropping a course.

University cultures vary, and while I can’t speak for all of Canada, two stand out. The growing needs of students convinced Concordia University in Montreal to build a student success centre a year and a half ago. “As a professor, I never had time to help students with presentation skills, or time management,” says centre director Laura Mitchell. “So we found it important to have a one-stop shop for support for all kinds of students as a way to make their studies feasible.”

Anne Forrestall, assistant vice-provost for student affairs at Dalhousie University, sees just how conflicted students feel when it comes to going at their own pace. And that is why she emphasizes to students that completing an undergraduate degree is not a race. “When I was working as an adviser myself, I would often tell students: 10 years from now, you’ll be 10 years older no matter what you do. But you could be 10 years older and have a degree [whether you finish in four or more years],” says Forrestall.

No one should feel ashamed of going part-time.

I’ve gotten to a point where my peers, friends and family members started swapping “What are you planning to do with your life?” questions with “When are you finally graduating?” I’ve now completed the fourth year of my undergraduate degree, and I’ve yet to convocate. I’m content with that. Going part-time isn’t right for everyone, but it was right for me.

For Saara Siddiqi, being a part-time student had become a “chicken-and-egg-type of scenario.” Studying English lit at the University of Waterloo in 1997, she was expected to read three to five novels a week. To fully engage with the material and achieve the GPA she wanted, she decided to switch to part-time. To afford tuition and living expenses, she had to work, but the work-study-life grind became too much, and she left Waterloo in 2002.

Siddiqi landed a full-time job with a community organization, which helped her pay student debt. Then she lost a job opportunity because she lacked a bachelor’s degree. That convinced her to register part-time at Waterloo again, in 2009.

This time, she did most of her courses online. After health complications, and then marriage, Siddiqi postponed her studies again. With maternity leave, though, she went back to campus for one course, did another online and finished.
“When I graduated in 2013, I felt like everything was worth it,” she says. “I had the degree in my hand and I had a child who would one day learn about the resilience his mother demonstrated.” Siddiqi advises students to “find the best courses that meet your requirements. Couple that with what your bank account can handle, and that is your sweet spot for part-time studies.”

Taking two years off before starting university was important to Mike Stickley, a sociology student at the University of Calgary. They were spent fulfilling his passion for helping people through social work, and participating in the youth volunteer program Katimavik. Once he started his undergraduate degree, he got an entry-level position at the Calgary Drop-in and Rehab Centre Society. He credits Katimavik,  “the single most important experience in my life.”

With a job at “the DI,” and a full-time course load in his first year, Stickley realized that to avoid student debt and keep up with studies he would need to drop courses. His job was too good to pass up, as it was enriching and already within social services. But he didn’t take much pride in his decision to go part-time at first. “Like, it was something to be ashamed about. But I’ve gotten a couple of years older and don’t run in younger student circles,” he says.

“It boils down to the same thing when people compare college to university, or online classes to physical schools. Nobody cares once you’re outside of the system.”

His advice? “Try not to think of it as not being able to handle university. The end result is that you just won’t be as stressed out and ultimately perform much better.”

Camila Matamoros had juggled steady jobs and a professional art practice during her teens and twenties as a queer street-involved youth in Montreal who hadn’t finished high school. In 2006 , she made the trip to Nova Scotia College of Art and Design to enrol in fine arts, but it wasn’t for her.

She returned to Montreal in 2008 to study philosophy at Concordia, the next stage in her development as a conceptual artist. Matamoros completed her B.F.A. in 2011, going to school part-time, and working to cover student loans and expenses. She returned for a master’s in linguistics.

At grad school, she received a diagnosis for a learning disability, which helped explain her rocky school career, even though she had a strong desire to learn. In university, choosing part-time studies helped her achieve good grades. “If I had to go full-time, I think it would have been disastrous for my grades, for the quality of my learning, and for my self-esteem.”

Matamoros says diversity matters in the grad-school application process. “Most part-time students have a lot of other stuff going on in their lives,” she says. Those challenges “contextualize learning and can expand a person’s capacity for empathy and nuanced judgments. These experiences have real value for grad schools.” Proof? She has just successfully defended her thesis and completed an M.A. in linguistics this fall.