These court cases may just be for show. But that's a moot point.

Mooting, where teams play out a mock court case, can be fierce—and the once extracurricular activity is now often on the curriculum 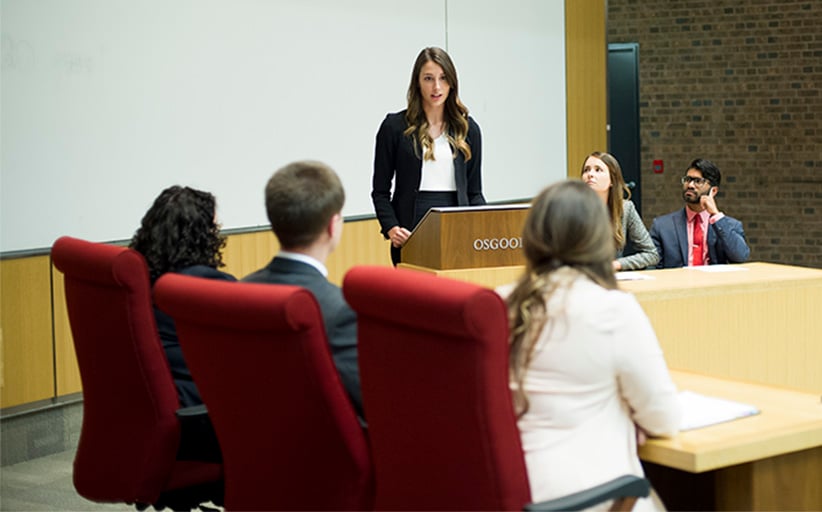 Every spring at Osgoode Hall, 120 eager students show up for what professor Faisal Bhabha calls a “massive tryout process.” Spots are few, competition is fierce, and making the team—if you should be so lucky—is a big honour and a bigger commitment. “I’m essentially like a scout for a sports team,” says Faisal. Only he’s not talking about football; Faisal is the law school’s director of mooting.

“Mooting is to lawyers what debating is to politicians,” explains Bhabha. “Moot” refers to a mock court case, complete with role players and costumes. “It’s a simulation exercise for law students that resembles, looks and feels like the real thing,” he says. Mooting is one of Osgoode’s oldest student clubs.

What’s new, however, is the law school’s embrace of the ever-popular extracurricular into the school curriculum. Two years ago, Osgoode officially moved mooting under its institutional umbrella, and many Canadian law schools now make a first- or second-year moot compulsory.

Enthusiasts will take it to the next level: competitive mooting. Winners of internal moots progress to regionals, then national competitions and beyond. Dozens of top-level moots take place across Canada every year, bringing rising-star students together with top-notch real-life lawyers, judges and chief justices to decide the cases. It’s a hobnobbing opportunity like no other, and, after the moot’s done, comes a celebration that mooters and moot-lovers anticipate all year.

“I’m already looking forward to it,” says Erin Hoult, a commercial litigator and the new director of the Wilson Moot in Toronto, which focuses on equality-seeking groups and usually showcases a Charter challenge. “To get on your feet and actually argue a significant constitutional appeal at a Supreme Court in front of real judges is practical experience that is otherwise really hard to get,” she says.

Winners are rewarded with what Hoult calls “a really awesome trophy,” bragging rights forever, an impressive line for their resumés and usually some school credit. But if the plan is to moot yourself through law school, you’d better think again. “Students usually work harder at their moot than at anything they’ve worked at before,” says Bhabha. Osgoode caps students at one competitive moot per year. For some competitive mooters, that’s not nearly enough.

Now working at a labour and public interest firm, Dill was selected for Dalhousie’s Smith Shield Moot—“a privilege and an honour,” she says—and, having won that, she progressed to the Bora Laskin Moot, one of Canada’s most prestigious moots. “It was held in Montreal at the Quebec Court of Appeal,” says Dill. “You get to rub shoulders with people you’ve only heard about at school,” she says. “We moot Friday and Saturday, then we take a break for a party.” It’s extra-fun if you happen to be celebrating a win, which Dill had, thus becoming one of 2015’s four best oralists. “It’s amazing and terrifying all at once,” she says. “You’re so nervous and you build it up, then you get up there and you’re just having an awesome legal conversation with brilliant people.” But, after four moots in three years, she’s done. Maybe. “Eventually, years down the line, I could apply to be a moot judge.”

There’s no compulsory mooting at Queen’s. That said, students such as Heard are warned that half the student body will try out. Around 50 law students are chosen for approximately 20 mooting spots, including the Arnup Cup. “The Arnup is not like other moots, because it’s a criminal trial,” explains Heard. This means it has victims, witnesses and an accused. “Ours was an attempted murder case with a full jury,” says Heard, who is now articling at a criminal defence firm in Ottawa. Heard’s team scored just shy of the cut-off point to move up to regionals, but no matter. “I got to prepare and present my own criminal defence,” he says. “It was slightly less good for my partner, though. She wants to be a Crown.”

Having gone back to school after a career in business, Wiesel brought a few extra years of confidence to his moot tryout. Most UBC mooters are senior students, but Wiesel, following the advice of a professor and mentor, auditioned at the end of first year for the school’s Peter Burns Moot. Wiesel began preparing in the fall, making weekly treks downtown to meet with a senior lawyer. “They coach you, they mentor you through the arguments. It’s probably more one-on-one attention than you’ll get in your whole career,” says Wiesel. It worked: Wiesel’s team swept the competition, and Wiesel went home with the prize for best cross-examination. Even better, his team moved up to regionals, where Western Canadian law schools face off at the MacIntyre Cup.

There, despite his residency “in moot-land all year,” Wiesel’s team was curve-balled with new (mock) evidence that cost his team the cup. “Unpredictable things happen,” he says. Still, he’d recommend a moot to just about anyone. “It really builds your confidence and your advocacy skills and your ability to deliver an argument and respond to questions.”