UBC says no to the NCAA

After three-year consultation process, UBC decides to stay in the CIS 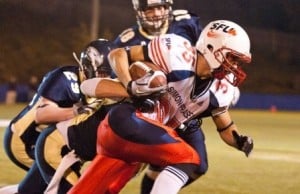 It’s official—the only Canadian school in the NCAA will remain Simon Fraser University.

That’s the result of today’s announcement by UBC President Stephen Toope, who said that his university will continue to work with Canadian Interuniversity Sport (CIS) on improving and reforming the association to ensure a higher and more competitive athletic standard.

“UBC has a proud history within the CIS as both a founding member and successful competitor,” he said. “But we need to build upon this tradition because, frankly, the status quo is no longer acceptable. Therefore we commit, in affirming our membership, to drive change.”

The result was somewhat of a surprise, given the bullishness of the athletic department towards moving, and the lack of movement from the CIS on scholarships and tiering. UBC and other schools have been pushing for a flexible salary-cap model for athletic scholarships, but have consistently been rebuffed, and the only movement on tiered leagues—which would allow for larger schools to play each other more often—is limited in scope, and will beginning next year. The CIS is a camel, slow-moving and created by committee, and changing it is always difficult.

However, Toope said that motions were on the table for the next Annual General Meeting to make small changes to governance and tiering which would give UBC and other large schools more influence, and affirmed his commitment to work with other university presidents to make the changes that most universities outside of Ontario have been pushing for on flexible scholarship models.

“Although the CIS has not yet resolved these issues, I believe that progress is finally being made.  Therefore UBC is today committing to both honouring and seeking to build upon the tradition of Canadian Interuniversity Sport,” Toope said.

The NCAA is currently four years into a 10-year window allowing international schools to apply for Division II membership, and UBC says it has not discounted exploring the NCAA option again if reforms in the CIS don’t come to fruition. But given this announcement, after a three-year consultation process, it seems UBC has committed to reforming the CIS, not leaving it. The door to the NCAA isn’t fully shut and locked—but for the time being, it’s definitely closed.

Photo: UBC will not be joining their SFU rivals in the NCAA anytime soon, courtesy of the Ubyssey