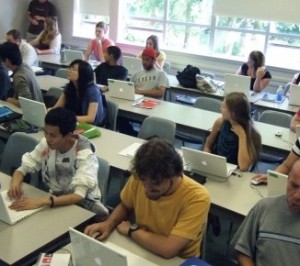 Classes could be cancelled for students at Vancouver Island University as early as Thursday morning when faculty would be in a legal strike position. Talks stalled between the university and the Vancouver Island University Faculty Association (VIUFA) on Tuesday, after a government appointed mediator failed to negotiate a settlement. Faculty had previously voted 84 per cent to give the union a strike mandate last month.

Negotiations broke down because VIUFA wanted a “no-layoffs” clause in the collective agreement, according to university spokesperson Toni O’Keefe. “We can’t do that” she said, citing the B.C. government’s demand that public universities freeze budgets. “We just can’t negotiate on cost.”

VIUFA’s chief negotiator Dominique Roleants disputed the university’s claim that it cannot commit to no layoffs. “Virtually every university in Canada has language that severely restricts cuts to education and faculty layoffs, yet VIU won’t even meet to discuss this issue with us,” he said in a release distributed to media Tuesday morning.

The current collective agreement allows for layoffs “for reasons of demonstrable and substantial declining enrolment over a sustained period, and for reasons of a demonstrable need for program or service reduction, including the non-viability of non-teaching positions.”

VIUFA would like to see the language strengthened so that layoffs, for its members, would only be permitted if the university was forced to declare a financial crisis.

O’Keefe said that while the university refuses to include a no-layoffs clause, it is willing to work with the union when reducing staff and faculty. VIUFA president Dan McDonald says that that is news to him. “They’ve certainly never said anything like that to us at the bargaining table,” he said.

The faculty association also says the university plans to cut courses, but O’Keefe dismissed the claim. “They are trying to mix bargaining with the budget” she said. Although she couldn’t confirm whether the university’s upcoming budget would include course cuts, O’Keefe did concede that layoffs are a possibility. “I will anticipate that there will be reductions of some type,” she said.

In order to ensure no increases to the university budget, the administration’s bargaining position is to renew, unaltered, the collective agreement that expired last spring, and extend it until 2012. Wages would be frozen for the duration of the contract.

VIUFA is not calling for wage increases, however, and maintains that improving job security is its chief concern. “If they can’t give some job security, that’s a deal breaker,” McDonald said. “[Wages are] not as high a priority for our members.”

Patrick Barbosa, a spokesperson for the Vancouver Island University Students’ Union, says that while VIUSU supports the faculty association’s right to collective bargaining the organization is remaining officially neutral. “We’re not taking sides. We’re standing up for students,” he said.

More than 14,000 full and part-time students would be affected by a strike.

Unless the administration returns with a new proposal McDonald says “you can expect to see picket lines at 8:00 Thursday morning.”