From 2015: Many engineering graduates don't feel confident they can build anything. Experts say the schools are letting them down. How can that be? 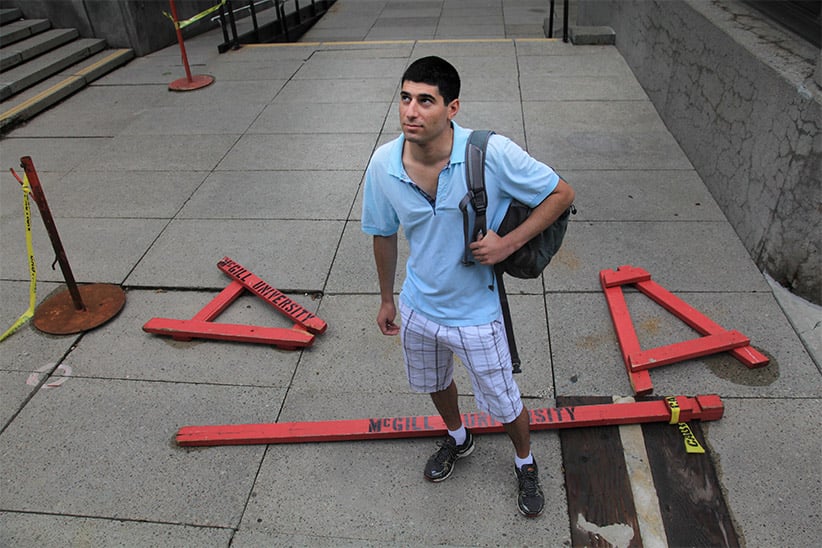 Before Adam Schachner enrolled at McGill University, he thought of himself as an inventor. He figured a degree in mechanical engineering would teach him the skills to build almost anything, but it didn’t work out the way he hoped. “I wanted to work on projects and we almost never got to,” he says.

Schachner describes a project in second year where the class was split into teams and each group had to make a remote-controlled robot that could push the opponent’s robot out of a ring. Think BattleBots meets sumo wrestling. But since no one knew much about radio signals or how to build complex controls, “we literally ordered a remote-controlled car off the Internet, and I think we added a front bulldozer made of aluminum cans and stuck it on with hot glue,” Schachner remembers. “It was terrible.”

Now in possession of a degree in mechanical engineering from one of Canada’s most prestigious universities, Schachner is faced with a dilemma. The 24-year-old can calculate how changing the diameter of pipes might change the pressure or speed of water inside, but says, “I don’t feel confident [enough] to build very much of anything.” He’s not be alone.

For years, Canada has talked about the shortage of new engineers to keep up with the growth in the mining, energy and transportation industries. [By 2020], Engineers Canada forecasts annual job openings for 2,500 civil engineers, 2,100 mechanical engineers, 1,800 electrical and electronic engineers, and 400 chemical engineers, not to mention thousands more split among computer, aerospace, geological, mining and industrial engineering.

In response, Canadian universities have expanded their engineering programs. As it stands, many students tend to come out of higher education—especially in engineering—with strong analytical skills and the ability to focus well on closed-ended problems, says Brian Frank, director of program development in the faculty of engineering and applied science at Queen’s University. Give them a problem, and they are very capable of plugging variables into the equations to get the answer. It’s the kind of work students dub “plug-and-chug,” he says. But Frank wanted to know: “How well are we preparing students to solve more realistic problems that are more open-ended? That are messier? That have conflicting goals or unknown goals? That led us down the road to looking at critical thinking.”

Related: The marks you need to get into engineering school

Frank and a team of researchers at Queen’s started a longitudinal study in 2013 to measure critical thinking, communication and problem-solving in approximately 2,000 students, including about 650 in engineering. “We had anecdotal complaints that students can’t communicate very well,” Frank says. “But the scores were actually quite high in many elements that had to do with written communication.” Using standardized tests, the study also found that fourth-year students showed improvement in critical thinking when compared with freshmen. And yet, there can often be a gap between what students learn in classrooms and the kind of critical thinking expected of them once they have a job or co-op placement.

When Heidi Manicke graduated from the geological engineering program at UBC in 2014—a field expected to have about 135 job openings annually for the next five years—she found work at Thurber Engineering in Vancouver, classifying types of soil for geological testing. It was daunting at first. “I had done a little soil classification in school in labs—maybe, cumulative, an hour—and then that was my job for the first three months, eight hours a day,” she says. “The expectation in the industry seems to be that they’ll train you.

“All of the engineers say you learn 10 per cent of what you need to know in school; the rest you learn on the job,” Manicke adds. And yet, to go through a four-year program and rack up student debt only to learn the practical skills after graduation sounds—especially from an engineering standpoint—inefficient.

“We don’t have, from our point of view, the right approach to educate our young [engineers],” says Robert Hardt, CEO of Siemens Canada. “[Students] in university or college learn all the technical basics from a theoretical point of view, but they don’t really focus on the practical implementation of those learned skills into the real world.” Hardt says Siemens Canada invests a lot of time getting graduates up to speed. “It’s frustrating for the students, but it’s also frustrating for us,” Hardt says. “When young people come into our company, they have a lot of new, creative ideas. It’s really refreshing to see it. What they lack is the ability to implement them in a company environment.”

Recent graduates are also often too reliant on computers, and need more of the practical skills they can only get from working, says Gary Kramer, vice-president of tunnels for engineering consultants Hatch Mott MacDonald. “If you don’t know what a million tonnes looks like, you should,” he says. “When you can look at a truck, which weighs about 60,000 kg fully loaded, then those numbers start to make more sense to you. That’s the kind of practical thing you don’t learn in a book.” And that kind of practical knowledge can preclude catastrophes.

Kramer remembers one near-colossal mistake when a recent engineering grad mixed up megapascals and kilopascals—a miscalculation akin to mistaking one’s weight in kilograms for tonnes. “The person was getting answers from the computer program, but did not have a feel for the numbers—what the answer should be,” Kramer says. Fortunately, the error was caught “because the [reviewer] looking at it had judgment.

“There should almost be a course that doesn’t have a computer in it,” Kramer adds, reflecting back to one course he took at the University of Waterloo called Approximate Structure Analysis. He was taught to constantly think about the answer as he completed the analysis. “The course really helped develop a student’s sense of structural behaviour, which is a key element to being a practical engineer,” Kramer explains. “Now, when I get computer results, because of that experience, I ask, ‘Do these numbers make sense?’ ”

Encouraging students to repeatedly analyze their data dramatically improves their critical-thinking skills, according to a recent study from Stanford and the University of British Columbia. Students with more autonomy in the process of data-collecting were 12 times more likely to suggest improvements to the experiment than students in traditional lab courses. The next step is implementing critical thinking into courses.

Jake Kaupp, an assessment and quality assurance coordinator at Queen’s University, tells the story of a Queen’s instructor who wanted to assess critical-thinking skills in students. “He turned to us and said, ‘Can you help me develop something?’ ” Kaupp helped to design one performance-style course where fourth-year students played the part of a consulting firm hired to figure out the source of a town’s groundwater contamination. After they were given information such as well-drilling cross-sections and the concentration gradient, students had to weigh the data and topographical information. “Is it the gas station? Is it the dry cleaner? Is it just runoff?” Kaupp lists the potential answers. Students were also asked to suggest a remediation strategy.

“It’s one of the mini-success stories we’ve had in the faculty of engineering, because of the focus on assessing critical thinking,” Kaupp says. It will also get students thinking about what they can expect in the working world.