These beagles on campus are cute, highly educational, and also cute 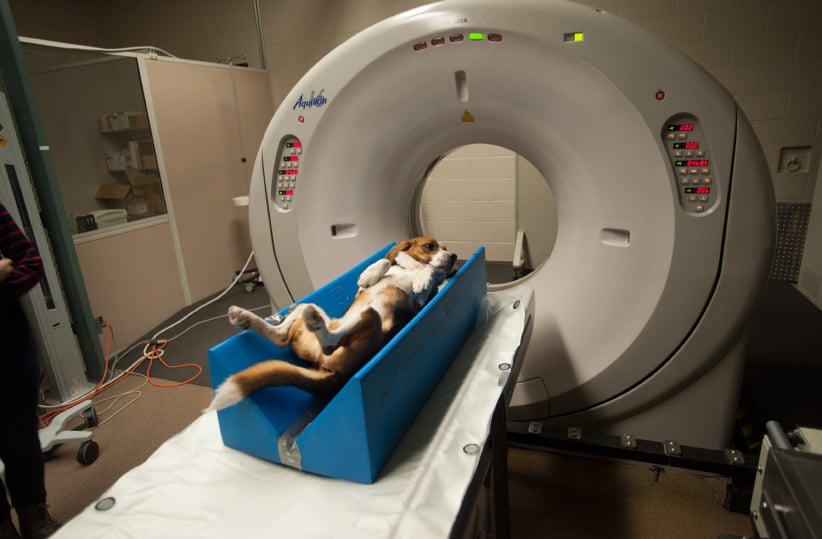 A Beagle preparing for an MRI scan. (Photograph by Nayan Sthankiya)

Few things can be as boring and tedious as lab research. But tedium is not a problem for students at the Western College of Veterinary Medicine at the University of Saskatchewan, since they—all in the name of science—get to hang out with a bunch of beagles.

Jennifer Adolphe, a Ph.D. candidate who graduated in 2013, was the ﬁrst student to work with the dogs. In 2009, she teamed up with veterinary medicine professor Lynn Weber to kickstart a nutrition study exploring whether peas were healthier than rice as a carbohydrate for dogs. Grain-free diets were becoming all the rage among humans, but there was little evidence to show they were any better for pets than traditional starches.

So Adolphe spent the next four years doing research on nine beagles, who were named after Peanuts characters. With the help of other students and faculty, she tested the pea diet against the rice diet and closely examined changes to the dogs’ glucose tolerance, insulin sensitivity and body fat after eight to 12 weeks of feeding. She found that the low-glycemic pea diet resulted in metabolic beneﬁts, fewer signs of diabetes and overall better cardiovascular health. “I got to learn how to formulate pet food and the role that nutrition plays in dogs,” says Adolphe.

The results proved so promising that, even after Adolphe graduated, Dr. Weber expanded the study to test more pulse crops, such as lentils and fava beans, against corn, a common ingredient in commercial pet food. She also added cats and aquaculture ﬁsh to the study as test subjects. Weber ultimately hopes to develop a protein- and ﬁbre-rich formula for pets, and to provide valuable data for the pet food industry and Saskatchewan’s pulse crop farmers. “A lot of research in this area is done by pet food companies, and they don’t make that knowledge publicly available,” says Weber. “We want our research to be shared.”

Why beagles and not, say, Bernese mountain dogs? According to Weber, the floppy-eared dogs are the ideal size, have happy personalities and “will eat just about anything.” Currently, Weber is looking after her second group of canines—the ﬁrst group has since been adopted—and expects her third batch of beagles to arrive next year. The new study will look into removing some of the bitter elements of the diet to make it tastier for picky pets. 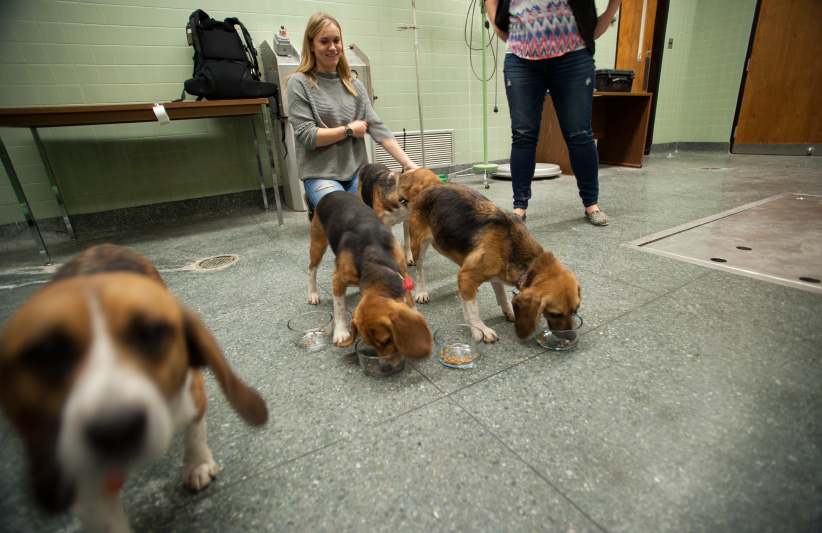 Grad students feeding the eager Beagles a variety of dog foods produced at the lab at the University of Saskatchewan. (Photograph by Nayan Sthankiya)

Since Weber is occupied with ﬁnding funding, she admits students “do the real work.” She has supervised about a dozen of them as they help out with various aspects of the nutrition study, including formulating the food, feeding the beagles, collecting blood samples, running ultrasounds and tracking insulin and glucose responses. In the summer, undergraduate and graduate students enrolled in veterinary medicine and agriculture are welcome to conduct their own dog-related research. The goal of the summer program is to attract more students to jobs in research, diagnostic laboratories, regulatory work and academia. “There’s a very large number of agriculture and vet students who want do research on dogs and cats, but it’s hard to ﬁnd those opportunities,” says Weber.

The logistics of conducting animal research in Canada are a huge headache and can cost thousands of dollars per animal, which is why hands-on research with pets is rare for students. The veterinary college has to drive the beagles in from a supplier in New Jersey, since most airlines won’t ship research animals. Animal testing is also a hugely divisive issue, and has been plagued by real-life horror stories of systemic animal mistreatment. Weber’s research adheres to the Canadian Council on Animal Care guidelines for humane animal use. Staff and students spend a lot of time socializing the dogs with daily walks, feeding them a nutritious diet and performing the all-important task of cuddling them. After four to ﬁve years, the beagles are adopted out to the right families. “They were a big part of my life for four years,” says Adolphe.

Now a senior nutritionist at Petcurean in Waterloo, Ont., Adolphe says this unique learning experience gave her a competitive edge in the job market. “Working with the beagles day in and day out is not a bad way to spend my Ph.D.”