Western University: An action-packed night at a Top 10 party school

It was Frost Week and Justin Trudeau had just touched down for a Town Hall. What the social scene looks like on a busy Friday night. 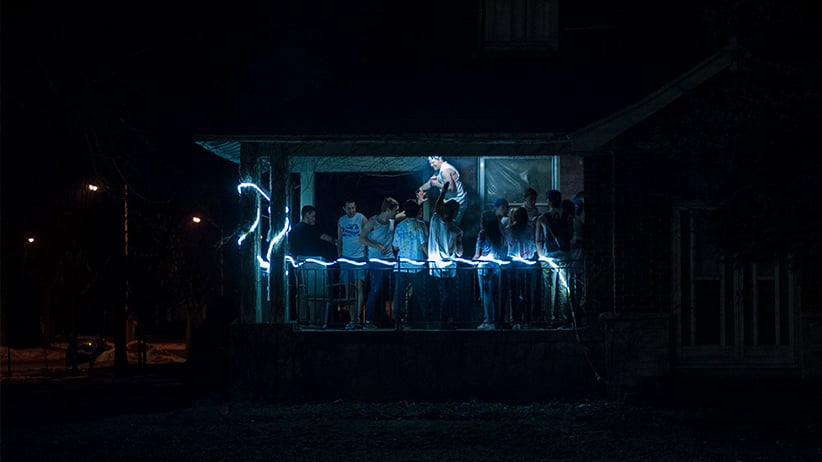 Students party on the porch of a fraternity house in London, Ont. on Saturday, January 14, 2017. (photo by Hannah Yoon.)

Dare we explore the rituals at a reputed party school, we will quickly find students squished into nightclubs like hyper sardines, bathroom stalls decommissioned by rivulets of pulpy vomit, girls wearing outfits made of sex appeal and disco balls.

The mission was to spend a Friday night at one of Canada’s top 10 party schools during the first week of classes in January—known as Frost Week–a peak party period that launches the semester. When Maclean’s surveyed students last year about hours spent partying, the top party schools were St. Francis Xavier University in Antigonish, N.S., and Bishop’s University in Lennoxville, Que., where students said they partied about eight hours on average each week. We chose No. 9, Western University in London, Ont., as a representative school, which also commands an 89.7 average entering grade for first-year students, the third-highest in the country according to 2015 data. Its students reported an average of 4.3 hours of partying per week; it has seven fraternities, five sororities and a nickname on Twitter that ends in “turnt,” which is slang for drunk.

So off we went to Westurnt on Jan. 13, a bazaar of fashion shows, talent shows, film screenings, a pool party featuring inflatable “bubble runners,” and, by the way, a visit from Justin Trudeau. In this world, the abundance of partying thrives amid an abundance of everything. Before we delve into the nightlife as outsiders, we have to recalibrate our standards of what constitutes a normal level of stimulation.

In this arena, Trudeau appears for the largest town hall of a prime minister in Canadian history. (For the sake of seating 1,800 people, the event was moved last minute from a community centre to the Western campus.) The entertainment begins when a young man accuses Trudeau of using Canada as his personal “superiority complex.” “Boos” are blaring, selfies flowing and secret service patrolling a crowd that includes veterans, Aboriginal chiefs, infants and a poodle named Denise.

When the dignitary gets boring, students start to leave. Josh Longo, a 23-year-old philosophy student, goes to a pool party at the recreation centre, where students can run on water inside inflatable bubbles. Others attend pre-drinking soirées to prepare for clubs downtown. Fourth-year political science and philosophy student Beatrix Szatmari parties one night of the week, staying out between 8:30 p.m. and 2 a.m., keeping similar hours to Jack Mackenzie, a fourth-year biochemistry student who drinks a water bottle of alcohol approximating six shots throughout the night.

At a club downtown called the Barking Frog, nobody’s in the mood for logic. It is typical to spend 60 per cent of the night waiting in line—about the percentage of time spent on a chairlift at a bad ski hill, perhaps—but the girls queued up outside are 60 per cent naked to save a toonie at the coat check. Inside, a walk across a room is a 10-minute navigation through a constipated mass of bodies; a comment to a friend is a scream over the blare of Akon’s Smack That; a security officer is a woman who spies over bathroom stalls to banish customers for puking; a saint is a person with an extra hair elastic.

Amid the club culture, Western won’t let partying define it. Laurence De Looze, a professor of literature, says his students work harder than his former students at Harvard University, a comparison echoed by Trudeau when he flatters the town hall with, “Western is the Harvard of Canada.”

Although students rarely call their school “Westurnt” when speaking in person, they have used it for two years as a Twitter hashtag to categorize their hullaballoo. Alleyne dismisses the nickname as “a play on words, I suppose.”

911 calls at Western are mostly unrelated to partying. Last year, student emergency responders received 940 calls on the Western campus: one-fifth concerning intoxication, the rest ranging from twisted ligaments at the gym to allergic reactions among toddlers at the campus daycares. Michael DeWit, a fifth-year student and director of the response team, says the spectrum of emergencies proves that students don’t just party. “There’s a tremendous amount of things to do,” he argues. “People say Western is a party school. It’s a lot more nuanced than that.”

A single night cannot capture all such nuance. While student Josh Malove mans the door at a frat party, Alex Ryken spends her night watching movies with an anime club. Jisue Lee, in second year, only goes out on Friday night to grocery shop, while Moath Abuaysha, in third-year engineering, says his weekends involve horseback riding at a nearby farm and printing 3D prosthetic hands to donate to the Red Cross. One night isn’t enough to see both the fashion show hosted by the Asian students’ club and a jam hosted by the black, Caribbean and African student associations. At the jam, vision is further limited by the strobe light, and if your blinking gets out of sync with the flashing, you’re completely in the dark.

But if one night permits one conclusion: The partying happens in a place that buzzes generally, a place where the Prime Minister competes for attention with a pool party, Japanese cartoons and philanthropic engineering, and where Millennials are fuelled, aside from alcohol, by their pituitary glands and fistfuls of cherry cheesecake. Western is so distinct from the reality of the surrounding community that it even seems to operate in its own time zone. On Saturday, when students eventually awaken, morning begins around 1:30 p.m.