Where to find the best hangover breakfast, cheap lunch and more 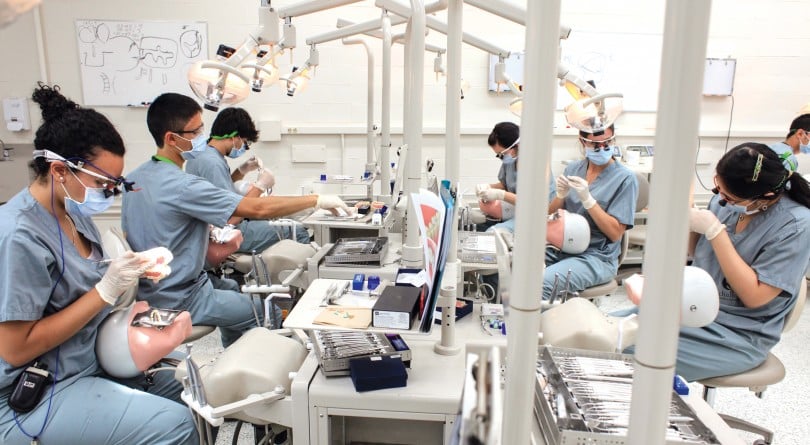 2nd yr Dentistry students are in a 4-hour Simulation Clinic session. Students are preparing their sets of teeth for an upcoming exam. (Photograph by Jessica Darmanin)

Best place for a nap: The couches in Mustang Lounge
Best cheap lunch: Located in the heart of downtown London, Covent Garden Market has offered students a wide array of inexpensive food options from dozens of local vendors since 1845
Best hangover breakfast: BLT bagelwich from the Spoke
Favourite watering hole: As Western’s unofficial pub since 1890, the Ceeps is the perfect spot for students to partake in an unapologetic night of drinking
Where to live: Living outside of the ‘Western bubble’ and in the downtown core of London means access to a lavish selection of shops, services and restaurants
Best place to study: The seminar room in the Music Library in Talbot College
Worst place to study: D.B. Weldon Library
Best campus event: In the past couple of years, Western University has become notorious for its FOCO or ‘fake homecoming,’ an annual event where students celebrate homecoming in late September instead of the official date in October
Best live music venues: London Music Hall and Rum Runners
Best spectator sport: Football (Go Mustangs!)
Unofficial school motto: ‘Purple and proud!’
Best cultural event: Black Student Association’s annual fashion show
Most original social event: Tobogganing down University College hill using trays from the cafeteria

The second I stepped foot inside the main gates of Western University, I was immediately struck by the campus’s breathtaking Gothic architecture and natural landscape. Known for its old, ivy-covered limestone buildings and its relentless school spirit, Western University is an innovative technological hub tucked in London, Ont. It has a state-of-the-art recreation centre, a celebrated business program and the rowdiest university homecoming of all time (seriously).

With a population of approximately 37,000 students, 12 faculties and more than 400 academic programs, Western is one of the largest universities in Ontario. Even though some of your first-year classes might seem unusually large, passionate professors are still adept at creating a dialogue with students through one-on-one sessions during office hours that initiate a personalized relationship.

Between Justin Trudeau calling our school the Harvard of Canada and Playboy crowning it as one of the best party schools in the world, Western is notorious for its student experience. The university provides Mustangs with a diverse array of opportunities for student involvement, personal growth and leadership development through numerous co-curricular activities, including more than 180 clubs. Want to get involved with environmental sustainability on campus? Join EnviroWestern and let your voice be heard. Want to start writing for the local paper? Step into the Western Gazette’s office.

Extras
From the moment I was catapulted into my first day of orientation week, Western felt more like a summer camp than an academic institution. During orientation week, first-year students sing cheesy repeat-after-me songs that help build the school’s morale. The week is also filled with concerts by popular artists, with previous performances by Marianas Trench, Down With Webster and Oliver Heldens. The whole point of orientation week is to help students meet new people, bond with their floormates and become familiar with the campus. Don’t be afraid to partake in the chants and cheers—and be prepared to miss out on a lot of sleep.

Local Vibe
Set in the heart of southwestern Ontario, London is a vibrant mid-sized city with a population of approximately 366,000. We are located right in Ontario’s “snow belt,” meaning that winter visits us earlier and more often compared with Toronto and Hamilton. Even when the snow piles up, there is still so much to do in London. A top-notch restaurant and bar scene, a newly renovated mall and a concert hall are all a bus ride away. Students can also take a break from studying and get lost in outdoor adventures at Sifton Bog or go on a shopping spree at Masonville mall.

The Skinny
To stay up to date on Western University’s news, events and trends, visit the Western Gazette (westerngazette.ca).