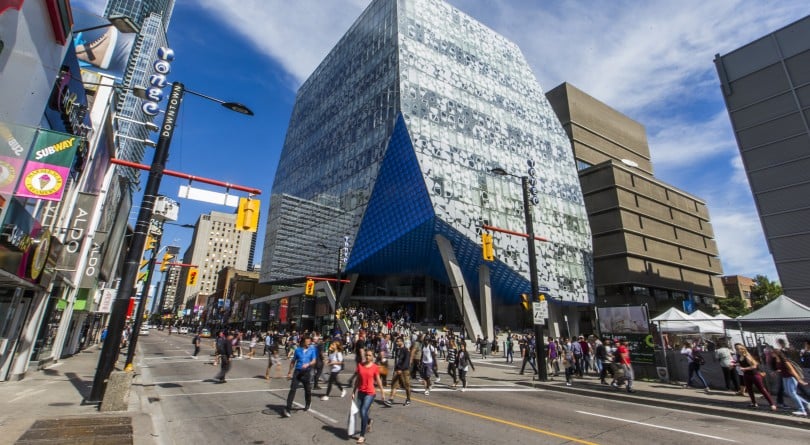 “OCAD U is a strange place. When I first visited with my dad, he was scared the Sharp building would collapse because it’s supported by giant pencil crayons. Sometimes, you’re not sure if a display is free food or an art piece. Yes, there is a TV show called Kim’s Convenience where one of the main characters goes to OCAD U. We’re a vibrant, creative centre living in the heart of Toronto, one of the most multicultural cities in the world. That’s what they told us at university fair, and it’s true. It’s easy to get used to being surrounded by creativity and forget to appreciate it.” – University Insider Jacqueline Lee

“Drawn in by the beautiful architecture on campus, I chose U of T for its variety of options, academic rigour and international prestige. Campus is gorgeous in the autumn, but still survivable in the snow. One downside—U of T has so much to offer, it could take a while before you find out half the stuff it has. Students are divided into faculties like engineering and music. Arts and science students can choose between seven different colleges. To ensure the best experience possible, especially if you plan to live in residence, research ahead to find the college with the best social life and living arrangements to suit you. Whether you want to live in a modern high-rise at Woodsworth or a castle-like building at Trinity, U of T has it. U of T also has 44 libraries and various other study spots.” – University Insider Rachel Chen

“Although Ryerson officially became a university in 1971, it still is deeply grounded in its college roots. With most programs focusing on hands-on learning rather than pure academia, it’s the best of both worlds. In downtown Toronto, no two people look or dress exactly alike. Gould Street, which runs through campus, is almost like a fashion runway, with trends ranging from classic sweats to ’90s grunge on display. It will inspire you to experiment with your personal style. Being at a commuter school means that you’ll meet people from all over the area. And, even if living right in Toronto isn’t a viable option, you can still get to know the city through subway and streetcar windows. Transit delays will also teach you a valuable lesson about patience and planning ahead.” – University Insider Celina Gallardo

“York’s a pretty interesting school; we pay some of the highest tuition rates in the country to attend the least amount of class . . . because the staff is always on strike. Situated on the border of Toronto and Vaughan, York is in the middle of nowhere, so it can be a hassle to get to for students living in the Greater Toronto Area (GTA). Many students who don’t want to commute—or come from out of town—live in “the village,” a nearby neighbourhood. It makes commuting easier for students (pretty much every house is within walking distance), but it’s also known to be a rough area, so walking in groups is highly recommended at night. (York provides a shuttle service at night for students in the village, as well as a chaperone service known as goSAFE for those on campus.)” – University Insider Matt Dionne