What about Vancouver Island? 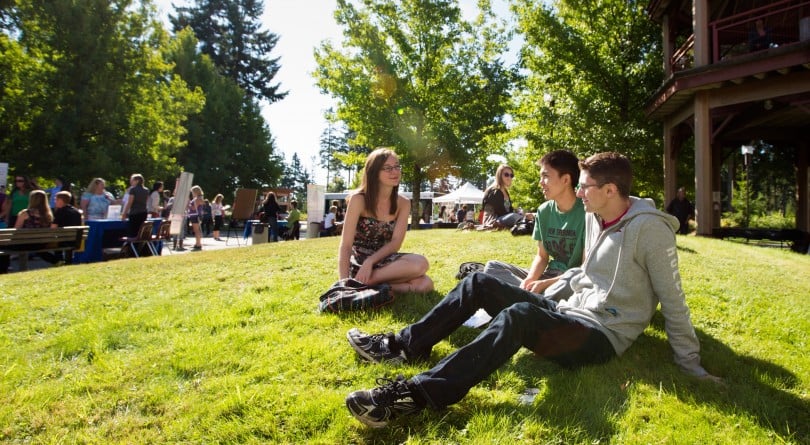 “UVic is surrounded by Ring Road, so the campus is literally contained within a circle. Science and engineering students spend time in the nice buildings with lots of glass and cool modern architecture; arts students get to know the more “homey” buildings. But it’s all good either way, because in arts we get to complain about the disintegrating furniture and weird smells. Especially in first year, classes can be large and intimidating, but UVic definitely has a small-town feel compared to schools like UBC.” – University Insider Holly Lam

“New construction is booming at Vancouver Island University (VIU), including a state-of-the-art health and science building, a major expansion to the marine, automotive and trades complex, and a geo-exchange energy system which will use water trapped in an abandoned mine to cool and heat buildings.
Despite the growth, however, campus life is far from overwhelming. Nestled in the lower slopes of Mount Benson and overlooking Nanaimo, VIU has around 7,000 undergrads and offers small, intimate classes. It’s typical for professors and students to be on a first-name basis. There are two cafeterias, both supplying fresh eats from the culinary arts program. Step foot into the bustling quad and you’ll have access to everything from Starbucks to a weekly farmers’ market. Wildlife is abundant—expect to learn alongside bunnies, deer and even owls.” – University Insider Spenser Smith

“Royal Roads is a unique university with a small on-campus student population. That means you’ll definitely be on a first-name basis with fellow students from other courses; you can also be certain your instructors will know you by name. I’ve found the unique learning community to be especially engaging. My instructors have not only helped me succeed academically, but also played integral roles in helping me succeed personally and professionally. Learning within a community has allowed me to make meaningful connections with new friends and professors. The Royal Roads learning model is based on collaboration; students have the opportunity to work with their peers. You won’t fall into the cycle of lecture, study, exam, repeat. Instead, I’ve learned how to work efficiently in a team—a useful skill when I graduate. This is a university where extracurriculars are built into the curricula; the classes take you outside the classroom and give you the opportunity to engage in causes that matter to you. Royal Roads was founded on the idea that what you learn can be used and applied in your real life.” – University Insider Negar Abedi

MORE ABOUT UNIVERSITY OF VICTORIA: