What it takes to become an underwater welder

In a trades program, Shelsea Hill discovered a love of welding. Then she found out she could do it underwater. 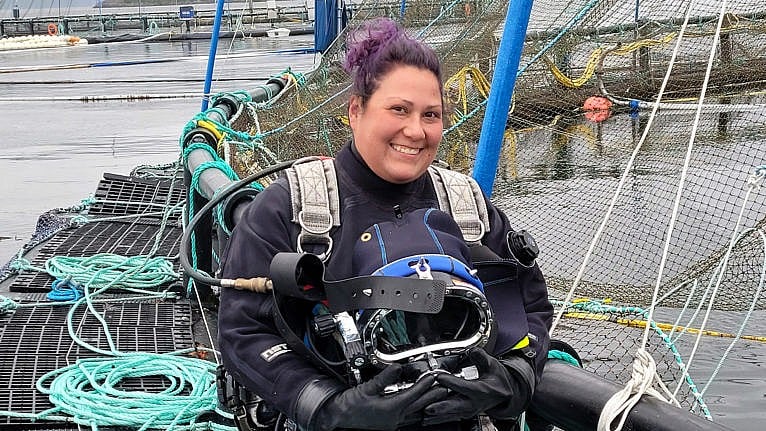 I grew up on Six Nations of the Grand River, a First Nations reserve. I was a pretty shy kid, and always preferred to be outdoors. There was a big forest behind my childhood house, so I spent a lot of time walking there, just touching the trees. I also loved swimming, whether in the pool in our backyard or in rivers and streams. In high school, I didn’t really have any idea what I wanted to do, but I ended up at Mohawk College for computer science. When I completed that program, I suddenly realized I didn’t want to spend any more time sitting behind a desk.

That’s when I saw an ad in the paper for a six-month introduction to trades program run by Grand River Employment and Training, an Indigenous non-profit that’s been in Ohsweken since 1992. It said you would be able to try carpentry, welding, heavy machinery, stuff like that. I applied, was approved for funding and immediately loved it. They took us around to all the different locals [trade unions] in Ontario to try them out. I didn’t like carpentry: too many splinters. But I thought welding was super cool. I mean, you get to melt metal and work with fire.

Around that time, I learned that the Ogwehoweh Skills and Trades Training Centre (OSTTC), which is really close to my house on the reserve, had a women in the trades program that focused on welding specifically. Having the program so close to home was wonderful. It was awesome to go to school in a place where everyone pretty much knows me. Looking back, I think it definitely helped me push through the program. I felt like I was somebody. Everyone genuinely wanted me to do my best.

I especially bonded with my welding teacher, Richard Green. I remember struggling with vertical welding, but he was always so patient, walked me through every single step and reminded me that I can do it—it’s just about practice. He kind of felt like a father figure to me, which I never really had. We stay in touch to this day.

After that program, I spent two years welding at a trailer company in Hamilton, which I liked, but then I saw a video of someone welding underwater on social media. I remember thinking: that’s just so cool. I want to do that. I got my open water certification and had my first scuba experience. My strongest memory is how incredible it felt to breathe underwater. It felt like having a superpower.

I moved out west to beautiful Vancouver Island to chase my underwater welding dream, and at this point, I’m almost there. I’ve been a commercial diver for about four years, mostly doing support for fish farms—fixing nets and making sure everything is good for the fish. I still love the magic of being underwater, surrounded by thousands of fish. I just got word that my company is looking into a welding project soon, and that I might be part of that, which would be a dream. I have all the experience I need in diving and welding, so it would be perfect for me. For now, I’m just so happy I was brave enough to go after what I want. As told to Liza Agrba

This article appears in print in the Maclean’s 2022 Canadian Colleges Guidebook with the headline, “Diving deep to fulfill her dreams.”