When a tree fells a power line, call a utility arborist

In the face of more storms and downed power lines, utility arborist programs are coming on stream to train the fearless 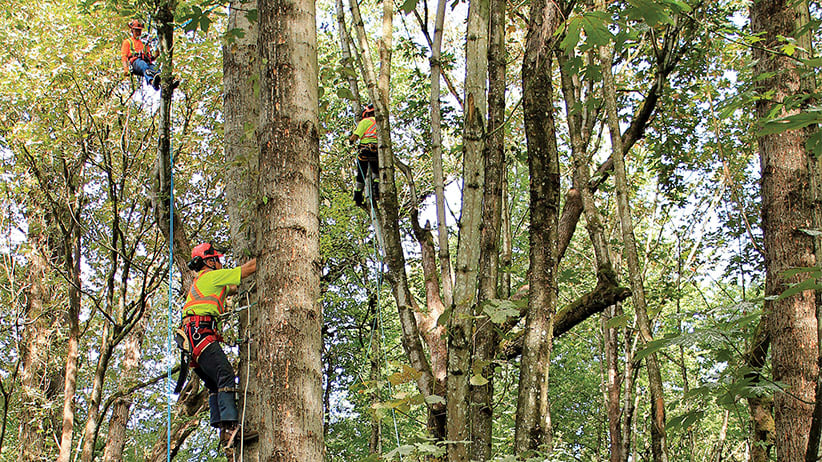 Tree tops: Students learn important skills, such as how to use a chainsaw (Thrive Communications)

In 2014, tropical storm Arthur ripped across New Brunswick, leaving a path of devastation and downed power lines. Thousands of homes and businesses were without electricity for more than a week, the contents of countless freezers and fridges spoiled in the summer heat, and fist fights broke out over scarce pots of fast-food coffee. The province hired power crews from Quebec and Maine, along with private contractors across the region, as its own employees struggled to repair the damage.

A new partnership between the Maritime College of Forest Technology (MCFT) and New Brunswick’s electrical utility, NB Power, aims to make sure the next disaster is handled better. The college’s new utility arborist program, starting in February 2017, is designed to help the province become more self-sufficient, particularly in the face of a changing climate and more frequent extreme-weather events.

When a tree falls on a power line in a storm, a utility arborist is generally the first to respond, moving the tree so a technician can reconnect the lines. They’re trained to prune, fell or remove trees, or clear vegetation close to energized power lines, equipment and structures, which can involve working on the ground, going up in a bucket truck or even climbing trees, sometimes in dangerous situations.

Because it can be stressful, physically demanding and detail-oriented work, program coordinator Todd MacPherson says the school is being very selective about admissions, with applicants subjected to a behavioural and aptitude test, physical and medical tests, and an interview. There’s also a height-anxiety test, which will be done at an NB Power training facility. Applicants will climb a 14-metre pole, then strap a harness around the top of the pole. “Then they have to lean back and let go with their hands, just to see if they’re afraid, and if they trust their equipment,” says MacPherson.

It is already a regulated trade in both Ontario and British Columbia, with Ontario’s Sault College offering a program that starts every other year; B.C.’s Electrical Industry Training Institute has a similar two-year program. Another path is through on-the-job licensing and testing for those who apprentice with a power utility. Ontario’s Hydro One, for example, offers an apprenticeship made up of four 1,500-hour terms, about nine months each, including a seven-week orientation session and seven weeks of in-school training with Hydro One.

MacPherson says one long-term goal is establishing utility arborist programs in two more provinces, at which point they can work toward getting the trade nationally registered with Red Seal, with the tax incentives, quality-control systems and cachet that come with it.

MCFT’s first cohort will be made up of 25 students, ideally between 20 and 30 years old. There has already been lots of interest, including applications from two New Brunswickers currently working in Alberta who want to move home. Because it involves four months of in-class training followed by seven to eight months of paid work with a licensed contractor, MacPherson predicts wages should more than cover the program cost, which is about $15,000 over two years. Once students are working, pay can vary, but the City of Toronto was recently hiring for a similar position that paid $26 an hour.

Jump-started with an $85,000 provincial grant, New Brunswick’s program will rely on an assortment of instructors from the college, NB Power—which has committed to buying two new bucket trucks at a cost of $350,000 each—and private trainer Arboriculture Canada. The college will lead basic skills classes, such as how to maintain and use a chainsaw, for example, while NB Power will cover working with electricity and power lines, as well as training to their own in-house standards.

“Arboriculture Canada will get into the nitty-gritty of being a utility arborist,” says MacPherson. One course, called Tree Dynamics and Integrated Risk Assessment, will teach how trees grow; how to identify signs of rot, disease or injury; and how to predict how a tree might fall toward or away from electrical hazards or infrastructure.

The ideal scenario is that students will develop the skills, experience and confidence needed to start their own companies in the coming decades. Which means the next time the power goes out, New Brunswick can look for help in its own backyard.