The best part-time jobs for students

Don’t make fun of that McJobber. His employer might be partially reimbursing his tuition. 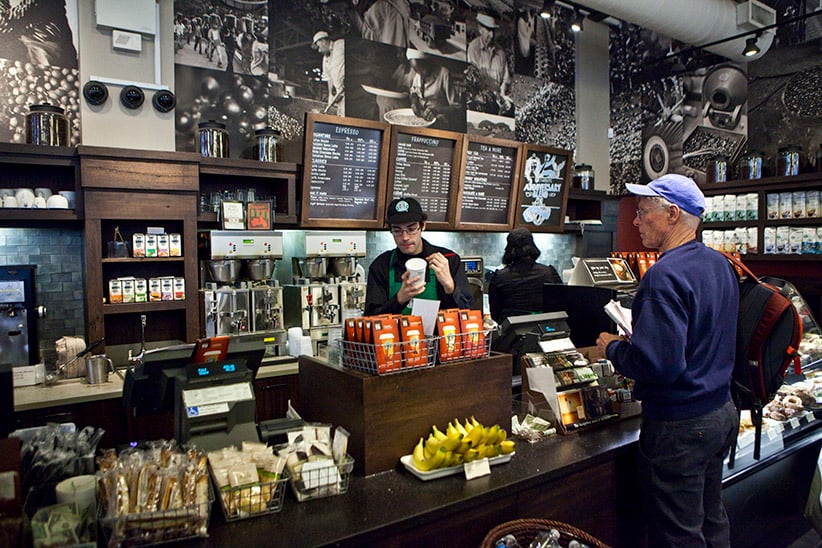 A customer purchases coffee at a Starbucks. (Ramin Talaie/Corbis)

Whether it’s to help pay tuition, rent or for everyday expenses, a part-time job is a necessity for many students. While firing off an application to the first ad you see on Craigslist could prove fruitful, we’ve done some research to figure out which employers offer you more than just minimum wage. After all, not all part-time jobs are created equal.

Some companies extend benefits to part-timers, including tuition reimbursement, health and dental coverage, flexible schedules, stocks at a discount and, of course, employee discounts.

Students will have the most luck finding benefits at retail jobs, because weekend and evening mall hours are attractive to those who typically have few responsibilities after finishing class for the day, says Nathan Laurie, publisher of JobPostings.ca.

It may seem odd that big retailers are willing to spend money for benefits on student employees, who usually plan to move on after a few months or years on the job. The reasoning is employers hope to create a work environment that not only attracts students, but retains them, says Tanya Sieliakus, a Halifax-based human resources expert.

“They want that employee to graduate and stay,” she says. “If you’ve got somebody and they’ve grown up with the company, that’s the ideal. They know the good, the bad, the ugly of your organization.”

Working for an hourly minimum wage could lead to a managerial or office job for students who stick around. The part-time perks just might be an incentive to climb the ladder.

Schlepping coffee at a café may feel more authentic than working at the Starbucks across the street, but joining the corporate conglomerate has its benefits. The java giant has 1,200 locations across Canada and is a prime employer for students in university and college looking for flexible schedules. According to company spokesperson Carly Suppa, about 70 per cent of store employees are between the ages of 18 and 24.

Coffee may be the ideal workplace freebie for sleep-deprived students, but the corporation doesn’t shy away from providing other benefits. After working one year, part-time baristas can receive a tuition reimbursement between $500 and $1,000, depending on how many months and paid hours they’ve worked.

There are plenty of other corporate kings who are kind to their students. Home Depot offers tuition reimbursement after six months of continuous service; those with more than three years of service can get up to $5,000. Another employer to keep on the job-hunt radar is Cineplex Entertainment, which also offers tuition assistance, along with flexible hours and of course, free movies.

From picking up odd jobs to toting around passengers, the sharing economy allows students to make extra money when it’s most convenient for them.

Students can find odd jobs on AskForTask.com, which connects taskmasters with job seekers who can get the work done for up to $30 an hour.

And if you own a car, you can always sign up to be an Uber driver, like Osman Yusoof, who has been driving for the car service since early 2015. The 24-year-old University of Ottawa computer engineering student ferries passengers around town for six to 10 hours a week and makes up to $200 a week.

“For students, you have classes at different times on different days, so [with Uber] you can really choose your own hours,” says Yusoof. He drives whenever he has some free time and needs to make extra spending money. “I like to splurge once in a while and I use my Uber money to do that.”

The ride-sharing service has gained popularity on campuses as an affordable alternative for party-goers trying to get home after pub nights and house jams. While Yusoof has worked between the peak hours of 1 a.m. and 2 a.m., he usually sticks to evening rush hour. Those above the age of 21 looking to profit from their vehicles need to sign up and undergo background checks. After that, students can play chauffeur whenever they want and receive a monthly paycheque from Uber.

This is an update of a story originally published on November 22, 2015.