Why a group of small universities believes the future is theirs

Known as the 'Maple League', the four universities promote the advantage they have over big-city schools: an intimate undergraduate experience 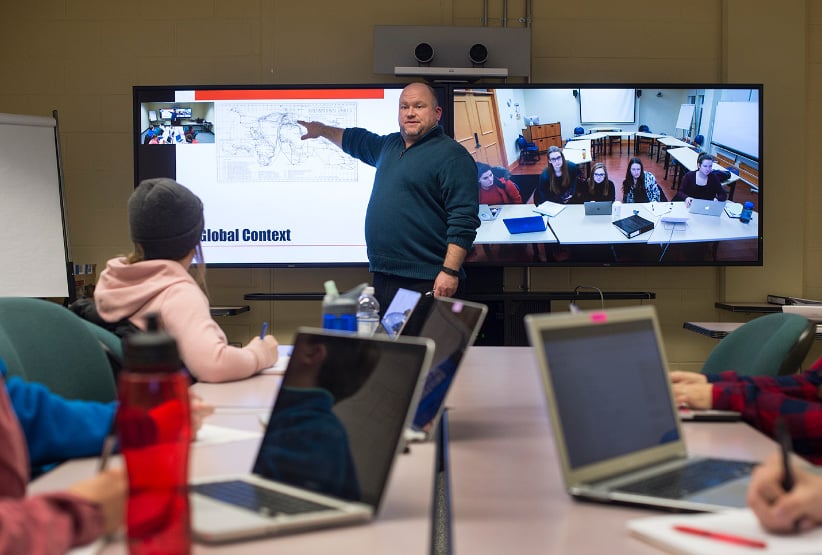 History professor James Sedgwick teaches a class at Acadia University as students from St. Francis Xavier are following along via satellite in Wolfville, N.S. on Tuesday, January 31, 2017. (Photograph by Darren Calabrese)

Small liberal arts undergraduate universities are outliers in Canadian higher education, but harbour big ambitions to be its future.

Four of them—Bishop’s University, Acadia University, Mount Allison University and St. Francis Xavier University—joined forces last year as the “Maple League” to raise their profile as an alternative to the “bigger is better” model that dominates undergraduate education in Canada.

“Students rank our schools very highly on student satisfaction but most Canadians don’t know about this model of education,” says Michael Goldbloom, president of Bishop’s and steering committee chairman of the Maple League (a snappier version of the original “U4” partnership begun three years ago). All with fewer than 4,500 students, the schools have started collaborating on course offerings, recruitment and other projects to promote an intimate academic experience at some of the oldest and, by choice, smallest institutions in the country.

Provincial government financing of post-secondary education rewards universities with growing enrolment, with a “bums in seats” funding formula that produces large freshmen classes. Goldbloom notes that about two-thirds of Canadian university students live within 20 km of their university; many live at home, commute to class and work part-time, limiting time for informal learning interactions outside of lectures. Meanwhile, only one in 10 students heads out of province for an undergraduate degree.

READ MORE: How universities are working to shatter the ivory tower

By contrast, Maple League universities are located in small communities without access to the large cohort of post-secondary age students sitting on the doorstep of big-city institutions. In the small-town residential setting of Maple League schools, three-quarters of students (widely recruited from across Canada and globally) live with their peers on or within walking distance of campus. In such a setting, away from parents, students are encouraged to grow as young adults while immersing themselves in learning in and beyond the classroom.

In an era of complaints about the academic quality at high-volume post-secondary schools, Maple League universities are betting their future success on jointly promoting what they see as their strongest asset: the undergraduate learning experience.

“The better job we can do to tell people what we do and why we do it this way, the more students are going to want to come to our institutions,” says Goldbloom.

“Shakespearience,” a new, for-credit Maple League course coming this summer, is one example of the “small is beautiful” approach to learning.
Developed by Bishop’s English professor Jessica Riddell, a 2015 winner of a 3M National Teaching Fellowship, the eight-day course offers an immersive experience centred on the works of William Shakespeare.

In early June, Maple League students (and interested faculty, staff and alumni) gather at Bishop’s for three days of intensive seminars on the Bard’s plays. Then they travel by bus to the Stratford Festival in southwestern Ontario for six plays (including two of the repertory company’s signature Shakespeare offerings) in five days.

At Festival workshops created for them, students will learn to stage a fight for a performance and practise a song-and-dance routine from Guys and Dolls, on this year’s playbill. Along with backstage sessions with actors, students will hear from Festival management on the challenges of running a major theatre company in Canada. At an all-inclusive price of $1,200 for students (from any academic discipline) and $1,500 for faculty and alumni, the course wraps up with a panel discussion and a banquet before the return home.

For Riddell, who has taught at big universities, what she values about small-scale, multidisciplinary learning is the opportunity for undergraduates to conduct original research (an experience typically reserved for graduate students) and take charge of their own learning. For example, for a 17th-century poetry and prose course last fall that featured John Milton’s Paradise Lost, Riddell assigned the usual tests and essays. But she also asked her 22 students to write and perform a play featuring the prosecution of Satan for crimes against humanity. “They had complete autonomy as a group building consensus on the direction of the final performance of the trial,” says Riddell, convinced the same teaching approach would be impossible with 500 students in a class.

“This is the future,” she declares of the Maple League model. “We really need to make a case not just for the viability but also for the essential nature of this model of education.”

Maple League universities compete for students, but view collaboration as a strategy for future viability.
Last fall, they all invested in video-teleconference technology so that a specialty course taught at one institution would be available to all Maple League students.

This semester, one of two Maple League courses on offer is “Genocide and Justice,” taught by Acadia University history professor James Sedgwick. The class of five students from his home institution and five from St. Francis Xavier all see and talk to each other by video, joining the discussion at the press of a button. “The engagement between me and my students has gone better than expected,” says Sedgwick.

Avery Carter, a fourth-year honours psychology student at St. Francis Xavier, says, “Even though we are however many kilometres apart, it is truly as if we are sharing one classroom.” Her classmate, ﬁrst-year Acadia student Charles Douglas, says the specialty offering “gives everyone a chance to learn something of interest to them that is not offered at their particular university.”

Beyond curriculum—with up to eight new courses on tap this fall—Maple League universities now co-operate on recruitment, starting with a three-city Canadian tour last year. Currently, discussions are under way for a possible shared campaign for students in the United States and globally, according to Maple League executive director Katherine Edwards, an assistant professor of English at St. Francis Xavier.

In another collaboration, Quebec-based Bishop’s plans to switch its football team membership from a Quebec university conference to one based in Atlantic Canada with Maple League members.

“What they are doing makes a lot of sense,” says Columbia University astronomer David Helfand, who spent 10 years in Canada as president of Quest University Canada, an independent, non-profit institution known for innovative practices in undergraduate education.

But the residential liberal arts model is better known in the U.S. than Canada, says Helfand, posing an extra challenge.

“They have to learn to market themselves aggressively, not as something that is just an alternative or just because they are small but because they offer the kind of learning that is essential to success in this economy.”