Why an Alberta college is flying the Blackfoot Confederacy flag

As Lethbridge College unfurls its flag, other schools prepare to do the same 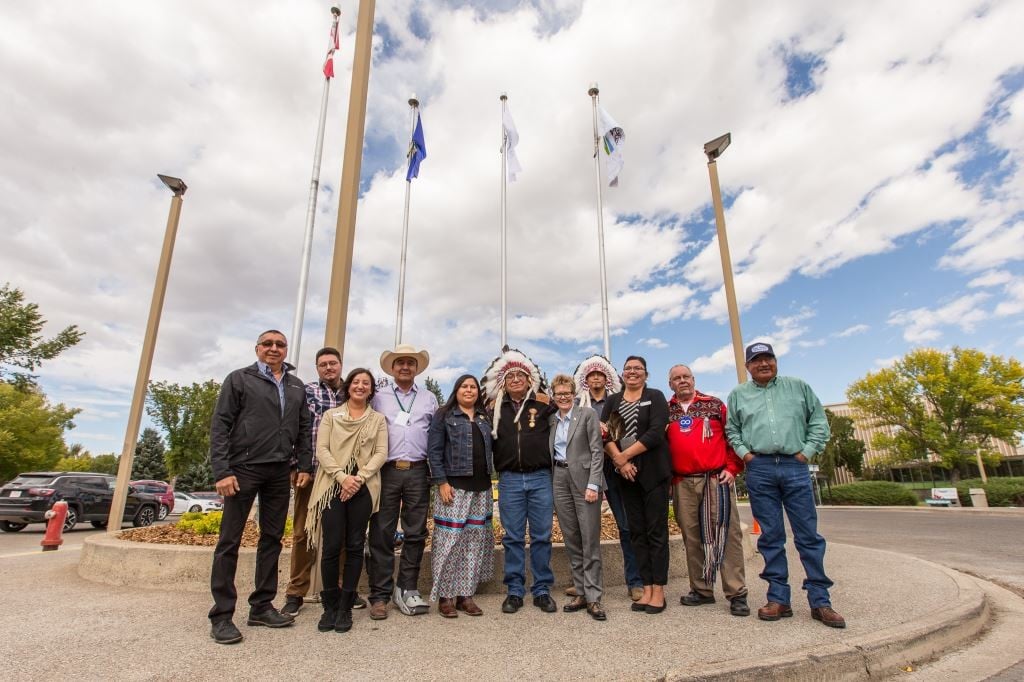 Lethbridge College in mid-September unveiled the Blackfoot Confederacy flag that will fly permanently on their campus. Other Alberta schools will soon follow in an effort to both recognize traditional territory and make Indigenous people feel welcome on campus.

“It’s a sense of pride for us being in Blackfoot territory that we would choose to fly that flag permanently,” said Lethbridge College president Paula Burns. “I think that’s an important symbol of our commitment to really be welcome to the Indigenous people, but also to educating others about the Indigenous culture.”

The Blackfoot Confederacy consists of the Kainai (Blood Tribe), Piikani (Peigan) and Siksika First Nations. The Blackfoot are considered to be the oldest residents of the western prairie region, with traditional Blackfoot territory ranging from the Rocky Mountains to East Saskatchewan, and from Alberta’s North Saskatchewan River to Montana’s Yellowstone River in the south.

“There was a time in history where there was a move to minimize those traditional territories,” said Marcia Black Water, Lethbridge College’s coordinator of Indigenous services and member of the Blood Tribe community. “[The flag] is going to help us better understand some of that history.”

Soon, more post secondary schools on traditional Blackfoot territory will be raising flags. Officials from the University of Lethbridge and St. Mary’s University in Calgary said that both schools have plans to permanently raise the Blackfoot Confederacy flag and the Métis flag on their campuses, with University of Lethbridge president Mike Mahon saying the flags will be raised before the end of the year. The University of Regina also plans on raising the Métis flag along with the flag of Treaty Four, which was established by the British Crown, Cree and the Saulteaux First Nations in 1874 and covers southern Saskatchewan, on their campus in the next few months.

The Sept. 19 flag raising was just part of the college’s ongoing Niitsitapi Indigenization Plan. Started in 2016, the three-year plan outlines annual goals and objectives while providing recommendations to departments within the school to work towards the ultimate goal of Indigenizing the college’s campus.

“It’s not something that’s going to be accomplished in three years, but it’s a good foundation for the college,” Black Water says.

Along with the raising of the flag, some of the plan’s actions include cultural awareness training for staff and a cultural support program for students, which sees two Blackfoot and one Métis elder come to the school each week to provide students with support and conversation. On October 19, the school will also be given a Blackfoot name by Elder Peter Weasel Moccasin as part of the college’s 60th anniversary.

“I think the opportunity to succeed in post-secondary is key to our community,” Black Water said. “If we can choose our education and we can be successful it’s very meaningful. It’s almost overcoming a bit of the past….making choices where [our parents and grandparents] couldn’t make choices in their education.”