Why I got my degree: ‘Without language, we have nothing’

Katsitsionhawi Hill, a 25-year-old Seneca from Six Nations of the Grand River, on how a lifelong love led to her degree 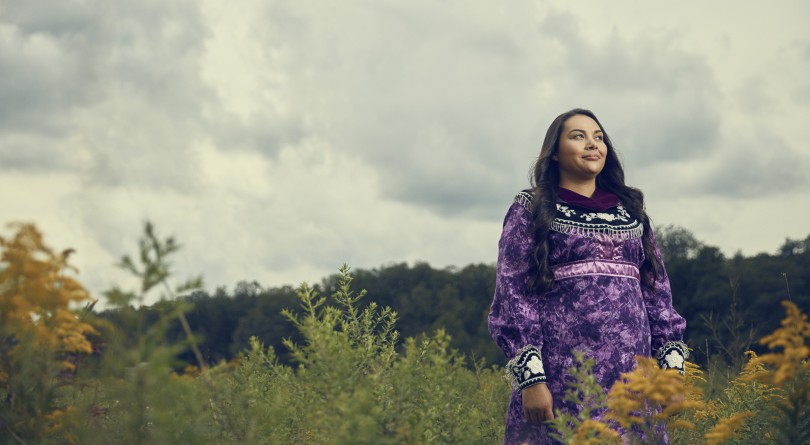 I’ve always wanted to learn my Mohawk language—Kanyen’keha—ever since I was a little girl in kindergarten. I remember getting home from school and playing in the basement with my baby dolls. I would pretend to teach them the language, and even at that age I thought, “Maybe I’ll grow up and be a teacher—a language teacher.” My mom enrolled me in the immersion school in our community, Six Nations of the Grand River, and I excelled in it. My language was always something that brought me out of life’s ruts.

When I was preparing for high school, I begged and begged and begged my mom to send me to the Mohawk immersion school on Six Nations. At the time, the academics weren’t on par with other schools, and in her eyes, I always needed a challenge. She enrolled me at Assumption College School, which is a Catholic institution in Brantford, Ont. I didn’t ﬁght her over the decision; I said to myself, “I’ll be all right.” Around this time, I got a summer job at a daycare, and that’s when I realized I wouldn’t mind working with kids. In my senior year, I did a co-op at the immersion school, working with children back home. I really enjoyed working with the younger ones.

MORE: How Canadian universities help fight to save Indigenous languages

I got pregnant in my ﬁnal year of high school and had my daughter after I graduated. I was a young mom, and that in itself was frowned upon. I felt a huge amount of shame whenever I’d speak the language to my daughter out in public—people at Walmart often gave me strange looks. When I was in high school, my ex-boyfriend of six months committed suicide. I wanted to throw in the towel and call it a day. If it wasn’t for my daughter, I would have given up on my goals and learning the language. I would buy books from the dollar store and try to translate them into Mohawk for her. I discovered that there was a lot I didn’t know.

About a year after my daughter was born, I decided to go to school for early-childhood education. After earning my diploma, I was offered a full-time job at the Ekwaamjigenang Children’s Centre—my dream job—while also being accepted into the Ogwehoweh language diploma program at Six Nations Polytechnic. I decided to do both, telling myself, “I can do this. It’s not like it’s for the rest of my life.” For two years, I worked full-time during the day and went to school full-time in the evening.

My education continued. In 2017, I left my job with beneﬁts to earn my degree from Six Nations Polytechnic, while also attending Onkwawenna Kentyohkwa, a Mohawk immersion program on Six Nations. My days started at 8:30 a.m. and ended 12 hours later. It was one of the hardest things I’ve had to do in my life; I sacriﬁced a lot and missed out on time with my daughter. But at the same time, she was my little guinea pig—I took what I learned and practised it with her.

I have learned so much about myself, my culture and my daughter. I’ve learned about the abuse, the trauma and the history that my people have endured. It’s hard, because I feel it’s deeply unfair that I have to go back, at 25 years old, and learn my language. I should have been born with it—blessed with it. I’m really passionate about the idea that I’m not just doing it for myself, but for my community as a whole. Because without our language, we have nothing.

In May, after my ﬁrst year of studies at Onkwawenna Kentyohkwa, I was graded an intermediate mid-level speaker.

My daughter is the reason why I am where I am in life, and why I try so hard. She’s the reason I haven’t given up. She’s now in immersion school. We ride in the car and speak the language together. She points at different things and wants to know their names in Mohawk. She understands way more than I did at her age. That’s the best thing I could ever give her.

I hope to be a teacher. I want to give back to my community by assisting in the revitalization of our language and culture. In June, at a graduation ceremony at Six Nations Polytechnic, I had to come up with a speech in Mohawk. I was nervous. My teachers helped me, making sure it flowed correctly. On the podium, in my language, I said: “Shikeksà:tahkwe tsi náhe wà:kehre akà:ronke’ ne Kanyen’kéha né:’e tsi wà:kehre’ akherihónnyon’ ne Onkwawenna nó:nen akatehyá:ron’.”

Those words mean: “Ever since I was a little girl, I wanted to speak the Mohawk language because I wanted to teach it when I grew up.”

—As told to Kyle Edwards