The pandemic has accelerated a trend that was already taking hold in higher education. And that, surprisingly, might be a good thing. 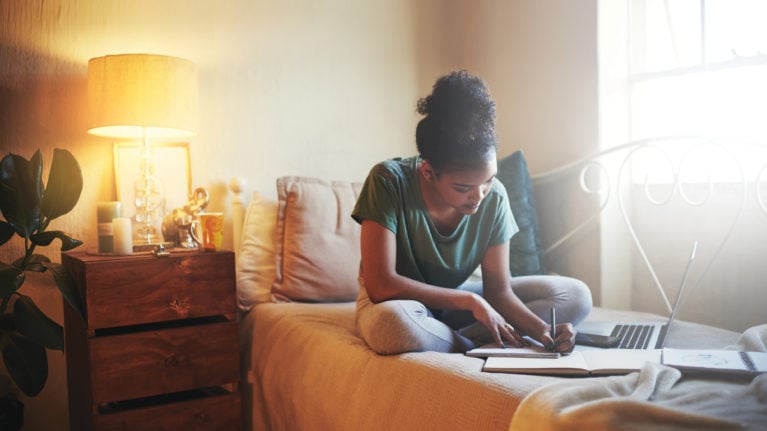 If your only experience with distance education has been the sudden pivot to Zoom or Google Hangout classes during the pandemic, it’s understandable that you might doubt its effectiveness in comparison to traditional learning. But the data on distance learning is actually pretty clear: it can be just as good as its in-person counterpart, provided the course is well-designed. In fact, some experts say distance ed can even outperform traditional classroom set-ups, especially for students whose first language isn’t English, whose families experience poverty, or who have learning disabilities.

“Studies that have been conducted comparing the two generally show that distance education is as effective as in-person education,” says George Veletsianos, a professor in the school of education and technology at Royal Roads University and Canada Research Chair in Innovative Learning and Technology. Some studies find one or the other is better, he says, “but the meta-analyses have found outcomes between the two are generally the same. If there’s any sort of difference, it tends to favour blended courses.” (That is, classes that utilize both online and in-person elements.)

In fact, Veletsianos says, the success of any course, in-person or online, comes down to the way it’s designed, and that requires instructors to rethink how they teach and how they understand learning. One pedagogical philosophy applied to online education has its roots in the work of American philosopher and educator John Dewey, who believed that children should not be passive vessels for knowledge. In Dewey’s view, learning should be experiential, rather than focused on rote memorization—a radical idea in the 1890s. A hundred years later, Matthew Lipman drew on Dewey’s work and that of Dewey’s contemporary, Charles Sanders Peirce, to develop his idea of “community of inquiry” (now often referred to as COI), which champions dialogue between teacher and students and encourages students to critically evaluate the information they receive. “We can now speak of ‘converting the classroom into a community of inquiry’ in which students listen to one another with respect, build on one another’s ideas, challenge one another to supply reasons for otherwise unsupported opinions, assist each other in drawing inferences from what has been said, and seek to identify one another’s assumptions,” Lipman wrote in his 1991 book, Thinking in Education.

In 2000, a group of University of Alberta researchers—D. Randy Garrison, Terry Anderson and Walter Archer—adapted the COI philosophy for online learning. Their framework was built on the relatively new ability to have text-based group discussions via the internet, an important point of departure from traditional distance education, in which students worked independently of one another. Technology at the time didn’t allow for synchronous (or “real-time”) communication, but this new framework ameliorated one major pitfall in distance learning: the lack of social interaction.

More recent studies have found that, as technology improves, there are many more opportunities to apply the COI philosophy to online courses. For example, wikis—web pages with open editing systems, like Wikipedia—can be used to house course documents such as mini research projects or a list of relevant terms or definitions, or they can function as an online portfolio of student work. A community of inquiry can even be built into massive open online courses (MOOCs), which have unlimited capacity and therefore more closely resemble a class in a huge lecture hall, but also allow students the agency to consume educational content according to their own preferences. And better technology, from video conferencing (like, yes, Zoom) to virtual reality worlds, make it easier for students to communicate and collaborate.

“Social engagement is an important foundation for a satisfying, engaging learning experience,” says Marti Cleveland-Innes, program director in the Centre for Distance Education at Athabasca University and a professor at the school. According to a 2009 study published in International Review of Research in Open and Distance Learning, the most effective and satisfying courses for students have a synchronous element, ideally via video, so they can benefit from non-verbal communication. (That being said, electronic-communication cues, such as emoticons, punctuation choices, short replies in message threads or even neglecting to reply to a message, do exist in text-based communication.)

RELATED: Why are Canadian universities so slow to adopt digital learning?

Another key factor in online learning is how students are assessed. Instructors have to be clear on learning outcomes, Veletsianos says, and their assessments must be developed for online environments. Cleveland-Innes agrees. “Nothing scares or hinders learning more for students than assignments that don’t make sense, or that aren’t well-aligned to material,” she says. Is a multiple-choice quiz the best way to test students’ knowledge? According to Cleveland-Innes, presentations or creative projects like graphics or videos can be as good, if not better. Students should be able to easily understand what they’re being asked to do in an assignment, she says, and what part of the curriculum the assignment relates to.

That said, there are barriers to online learning. Contemporary distance learning is highly dependent on reliable access to the internet, which some students across Canada just don’t have. Only 40.8 per cent of rural communities in Canada have what are considered standard internet speeds: at least 50 Mbps download and 10 Mbps upload. And across the country, less than two-thirds of the lowest-income households have any sort of internet at home.

Students with disabilities may have difficulty accessing distance education, and students with family, social or economic disadvantages also tend to struggle in online learning environments. In Veletsianos’s new book, Learning Online: The Student Experience, he cites a 2014 study in The Journal of Higher Education that found “younger students, African-Americans, Latinos, males, students with lower levels of academic skill and part-time students are all likely to perform markedly worse in online courses than in traditional ones,” which implies online learning platforms “may also reflect and perpetuate a number of inequities.” But, Veletsianos says, “paying more attention to the circumstances and needs of individual students may offer recourse to this problem.” 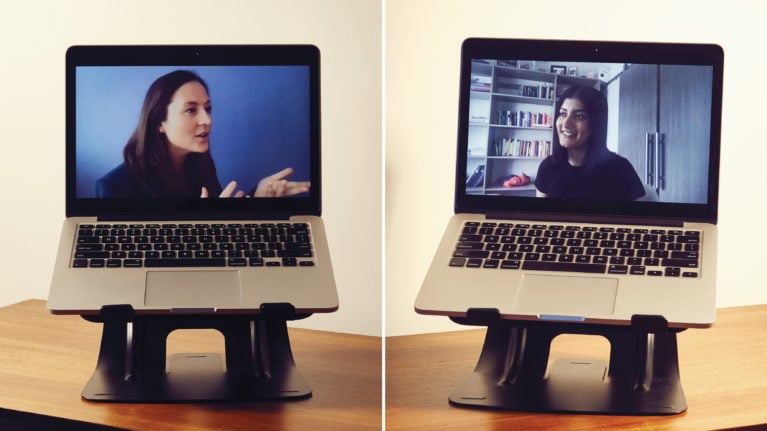 For her research on distance ed, UBC’s Lyon (left) talks with students like Munisha Bhandal (Photograph by Christie Vuong)

The recent pivot to remote learning during the pandemic was ad hoc, inconsistent and happened during a time of great emotional upheaval for students—Cleveland-Innes describes it as “emergency remote teaching and learning, which is a distant cousin to distance learning.” But there are already lessons that can be applied to education in general going forward, and many of them align with research on best practices for online learning. For example, Veletsianos has long advocated for the kind of increased flexibility and compassion that was seen in the way post-secondary institutions and instructors related to students after the pandemic set in. He says accommodating students’ lives makes accessing high-quality education easier for those who have to work, who have children, or who are ill themselves or caring for an ill family member.

Katherine Lyon, an instructor in the University of British Columbia’s department of sociology, and Siobhán McPhee, a senior instructor in the school’s department of geography, are currently researching how good course design can improve student experience and increase their capacity to meet learning outcomes during the pandemic. So far, they’ve surveyed 576 students who are enrolled in UBC distance courses about their learning and well-being. Respondents span 11 faculties and all year levels, and one in four are international students. Unsurprisingly, 75 per cent of students reported having difficulty focusing on their studies due to non-academic challenges, such as being in quarantine, caring for sick family members, working to cover parents’ lost wages or even just not being in the same time zone as their instructor. “We came to the conclusion that as educators, we can’t resolve these systemic barriers that students are facing,” Lyon says. “But we can indirectly help students manage these daily struggles and continue their studies by designing courses that fit their lives.”

There are several important findings around flexibility and choice in this study, including the fact that 54 per cent of students said they preferred a combination of synchronous and asynchronous course design. They liked being able to interact with professors and peers, but also said that while virtual meetings have a sense of normalcy, recorded lectures provided flexibility over where, when and how students accessed course materials. (They could still learn despite work schedules or time zones, for example.)

Students also reported that flexibility around assessments, including assignment deadlines and even which assignments and tests they completed, was beneficial to their learning and well-being. Interestingly, this wasn’t about cheating the system; it was about negotiating a timeline or workload that felt achievable, and then sticking to that decision. “They’re still going to end up doing the same amount of work,” Lyon says. “It just is organized around their holistic experience of learning.”

“We have an open lounge area in our online class, and if they send me a message, within a few minutes we just meet in there and talk about their questions, which is actually more communication and access than if you’re on campus and you have to walk 20 minutes to get to my office, and you don’t know if I’m even going to be there,” says Lyon. “Digital office hours are one thing I’m definitely going to take away from this.”

Veletsianos thinks the increased emphasis on “caring for students and being flexible to their needs” seen during the pandemic may be best achieved in the long term through a learning environment that includes elements of both in-person and distance learning. Cleveland-Innes agrees, though she’d prefer we stop thinking about them as opposing approaches, and instead see all learning as multi-modal (that is, involving different sensory systems and modes of learning) and multi-access (meaning it can happen in several different spaces, both physical and virtual).

That aligns with what students seem to want. In his book, Veletsianos cites a 2018 survey of 65,000 American undergrads, which found that 55 per cent of students “prefer a blended learning environment over purely face-to-face or online environments.”

And that’s a good thing, because we are likely to see a long-term shift toward remote work. “All of our students need experience working in remote-learning environments, because it is going to be part of our digital society, and our digital economy,” Cleveland-Innes says.