York University on strike: Why it keeps happening again and again

And again. The school's long history of labour unrest dates back (almost) to its founding 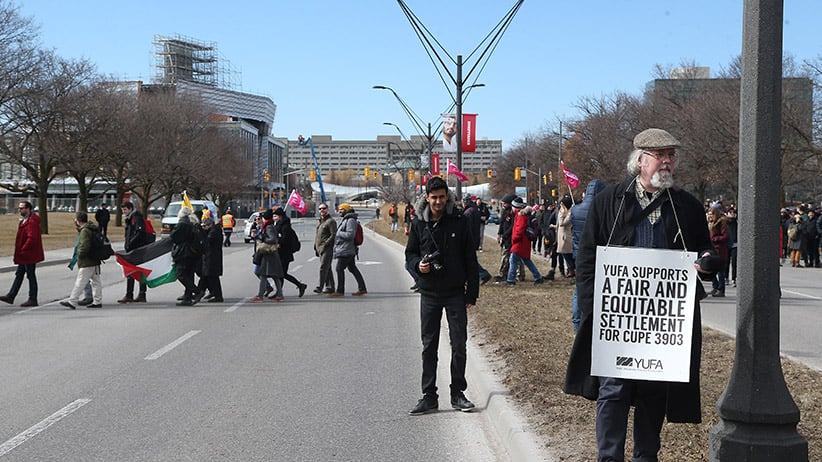 York University’s motto, “The way must be tried,” is a nod to new ways of thinking embodied by the school’s earliest days. It declared its independence in 1965 after six years of affiliation with the nearly-two-century-old University of Toronto. (U of T’s motto, for comparison: “As a tree through the ages”). Liberal and bilingual, York was founded on progressive notions, including that accessible higher education led to social justice, which attracted Marxist and socialist teachers and students. It took just 13 years for York’s first strike to rouse campus, and the four decades since have held many more. None have yet taken Canada’s longest-strike record for a post-secondary insitution—that would be 108 long days in the 1976 faculty strike at Quebec City’s Laval University—but could the arguably most-strike prone university in Canada finally steal the not-so-honorable top honour with its latest labour disruption? A look back before you place your bets.

Just two weeks into the school year, a thousand secretarial workers and library technicians—mostly women—walked out of work. The action forced school libraries, bookstores and post offices to close. Fearing new technologies might soon make their jobs obsolete, they wanted more job security and a 10 per cent wage increase. Marxist scholar Ellen Meiksins Wood, then a poli-sci teacher at York who founded the graduate program in Social and Political Thought, praised the women for giving the establishment a well-needed wake-up: “The administration had clearly believed that they were dealing with a docile and disorganized work-force composed mainly of housewives working for pin money,” she wrote. Students hopped aboard the movement, staging a sit-in at the president’s office, and just two weeks later, both sides met in the middle with a 7.2 per cent raise-and-benefits increase.

Sixteen months of unsuccessful negotiations resulted in what VP Michael Stevenson called “one of the most generous packages in the province.” YUFA disagreed and walked out. But within a few weeks, a bigger issue emerged when YUFA members discovered a now well-known truth: Female faculty earned an average of $13,500 less than their male colleagues. The strike’s new slogan became “Equity Now” and York, with one of the highest percentages of women faculty plus the most extensive Women’s Studies program in the country, suffered major backlash for its hypocrisy. “A remarkable transformation of political consciousness had occurred,” wrote Women’s Studies prof Linda Briskin. Fifty five days later, they arrived at what Briskin would later described as an “unsatisfactory collective agreement.” A hint there was more strike to come? Workers returned to their jobs wearing black t-shirts that read “The Struggle Continues.”

When the union wanted a five per cent wage and the admin offered just one point, reps from CUPE barged into President Lorna Marsden’s office and insisted she resume negotiations. “We feel that while the union has tried to bridge the gap between our positions, the University has not moved,” alleged a published open letter. Stuck in a standoff, a strike began in October—students could attend class or skip them without academic penalty (they mostly choose the latter). Things get messier when Toronto police force picketers off York property, and when Marsden skips a discussion panel, students replace her with a 6-foot paper maché model of her head. The school year had to be extended into the summer to make up for the eleven-week strike, which broke York’s record for the second longest strike from just four years earlier.

After a tempestuous year of work-to-rule, more than three thousand TAs and contracted profs were refused a 3.6 per cent cost-of-living raise—and struck again on November 6th. This time, cancelled classes led to student-on-student protests; while the York Federation of Students supported CUPE, other student groups rally to end the strike (and when the dispute drags on through to winter break, both sides want a tuition refund). By January, Dalton McGuinty succumbed to mounting pressures (“McGuinty fiddles while York burns,” read one Sun headline) and enforced back-to-work legislation. A tentative settlement had to do, but not before York cruised right past its old record to set a new one: 85 days, the longest strike at an English-speaking Canadian university—but still 23 days short of the French record.

Remember that tentative agreement? It didn’t last long, and in March 2015, 4,000 contract staff hit the picket lines—this time with 6,000 U of T staffers on board. CUPE reports two-thirds of undergrad courses are taught by non-tenured staff who make $15,000 a year; they demand three-year contracts and a tuition freeze. Perhaps fearing a repeat of ’08, swift negotiations took just four weeks. The Union called the efficiency “precedent-setting”, which is a very good thing since on March 5th, 2018, three thousand York teachers walked out of classes again. How long they’ll be off this time might be anyone’s guess.