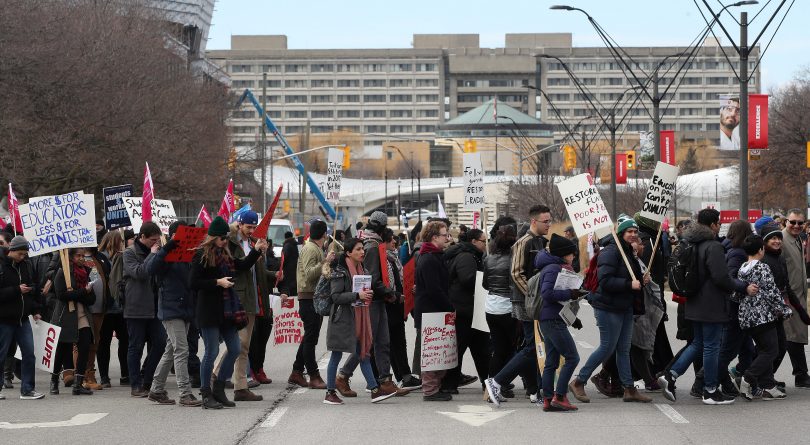 As the York University strike approaches its fourteenth week, the school is accusing union members of threatening and intimidating administration officials. The union says the administration are the real bullies. And students just want answers to basic questions.

Lisa Phillips, the vice president of academic and provost, recently published a letter accusing members of CUPE local 3903, which represents contract faculty, of “an escalating pattern of personal harassment.” Allegations made in the letter include union members protesting at President Rhonda Lenton’s home, reportedly chanting at the end of her driveway. Unionists have also harassed members of the board of governors, showing up at their workplaces and following them on campus. Further, the union is accused of completely closing roads and blocking traffic.

In response, CUPE 3903 spokesperson Julien Arend says: “Those are not official union actions and they were not undertaken by the union as a group. If individual people decide to do things on their own that’s not our issue. If there were members of our union in attendance that was something they chose to do on their own initiative.”

York University now officially holds the record for the longest strike for an English-speaking university in Canada, and tensions have mounted on all sides.

Students are also infuriated with the length of the labour disruption. “My program is only offered at York, so I’m forced to just wait it out as I can’t transfer,” says a first-year student in the faculty of health. “I’m frustrated with the fact that now my entire second year will be screwed up.”

MORE: York University: the student who struck out twice

The student, who asked to remain anonymous, had planned on completing summer courses so as to focus on extracurricular activities in the fall. But half of the available summer courses were cancelled. In addition, the student is unable to find a summer job until it is clear when classes will end.

Meanwhile, individuals living in residence have been frustrated with the university’s handling their living situation as well. A first-year political science student says she was forced to relocate to a different residence for the summer.

“When the strike first started, [the school] sent out notices that we had to be out of our residences by May 31, and we were told we would have to pay $30 a night to stay beyond that date,” says the student, who asked to remain anonymous.

They have since changed this policy, and students are no longer required to pay any extra fees to stay in residence during the strike. However, the school is relocating students to different housing, where they will remain until the end of the winter term. “I’m an international student, and I have no other place to stay,” says the student. “It’s not my fault the strike happened and that my winter term courses are on hiatus. Unlike domestic students, I don’t have another home to go to or a place to store my belongings to make moving to another residence easier.”

Moving students in the summer is common practice, says Barbara Joy of York Media Relations, and is unrelated to the strike. “Any student that expressed concerns with the relocation was permitted to stay where they were,” she says.

As the strike enters its third months, both parties have agreed to arbitration on several issues, but there are still a few outstanding matters. How contract faculty attain tenure-stream positions and the way graduate funding is secured are the two issues that are impeding a deal getting made, according to Joy.

However, according to Arend, the biggest issue preventing an agreement is the threat of reprisals against their members. “They have indicated that union members will face discipline for actions during the strike that the university considers unlawful,” he says. “So they will essentially preemptively fire people and then tell them to try and get their job back through the grievance process.”

York has sent a new offer to CUPE 3903, which does not have an expiration date. Until the union makes a decision on the latest offer, the strike continues.