York University strike: students must drop classes to get compensation

As the labour disruption approaches its eleventh week, students complain they're being punished for patience 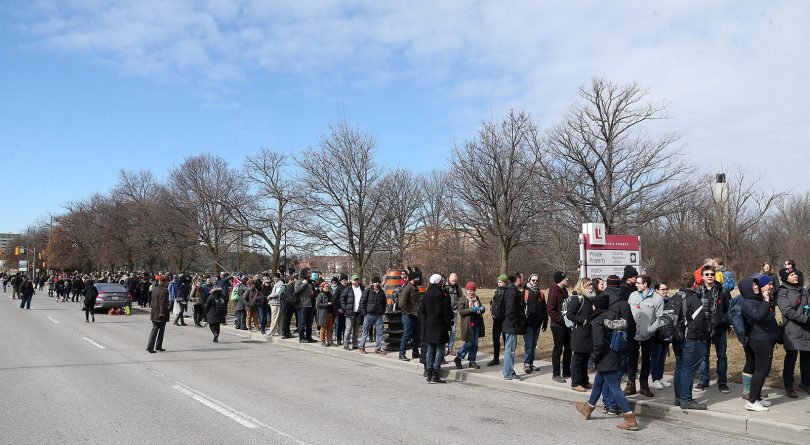 TORONTO- MARCH 5 - Hundreds of York University contract faculty line up to register as they go on strike as negotiations break down. The teaching assistants, part-time faculty and graduate assistants start the strike with a rally on Monday morning at Main Gate at York University inToronto. March 5, 2018. (Steve Russell/Toronto Star via Getty Images)

As a strike by teaching staff at York University stretches into its eleventh week, students complain compensation offered by the school punishes those who have been patient with the disruption.

The strike by contract faculty, teaching assistants and other staff began on March 5. Due to the length of the labour action by members of CUPE 3903, York has extended the drop dates for courses, and is offering eligible students a “Tuition Credit Opportunity” (TCO). However, the credit is only available to students that have dropped a course; students that attempted to wait out the strike are not eligible. Furthermore, the TCO is not a refund. It is a credit that can be used towards future courses. This means students who are leaving, or graduating, will not benefit from the credit. To receive the TCO, students’ must have already paid their tuition fees and be “in good financial standing,” meaning the amount they owe the school is $75 or less.

“I considered dropping a course, but ultimately decided against it because it just would have been a waste of time and money,” says Julia Galle, a fourth-year screenwriting student. “I just want to graduate at this point. I’ll stay in the courses I’m in because I’ve done half of them. To drop them now and possibly not graduate as a result would be pretty devastating.”

In response, Barbara Joy, chief spokesperson of York Media says: “We understand that graduating students have been greatly impacted by the strike and their frustration is understandable. The university put forward the best offer of its kind in Ontario in order to prevent a strike. We were disappointed that CUPE 3903 rejected our offer and it is now essential that we move to arbitration. For students graduating, we are offering additional accommodation and course completion options, and convocation is still taking place in June as planned.” The school has said it will determine how to complete unfinished courses once the strike ends.

Legislation proposed by the Liberal government of Ontario that would have mandated CUPE 3903 members back to work was blocked by the NDP. Now that the provincial legislature has been dissolved for an election, the strike can only be ended by the two sides reaching a deal. This is highly unlikely, according to a report from William Kaplan, an investigator appointed by the Ministry of Labour. After conducting a thorough investigation, Kaplan determined the two sides are too far apart to reach an agreement, and he believes arbitration is the only way to solve the dispute.

Many students feel the TCO is not enough compensation for the time they’ve lost because of the strike. “I would have liked York to reimburse me for the learning opportunities I’ve had to sacrifice because of the strike—they should be providing compensation for everyone, not just those who dropped courses,” says Clair Bosnich, a fourth-year screenwriting student. “York keeps pushing the option to take an assessed grade as if they think all we care about is the credit and not the time lost and material we were supposed to learn.” An assessed grade allows a student to be marked on their completed work in the course, provided 70% of the work from the original syllabus has been finished.

“It doesn’t pay for the commute fares and time that we’ve lost, which is one of my biggest qualms with it,” says Jasmine Wiradharma a fourth-year health studies student. “While my commute is only 45 minutes, I know some folks who wake up at 5 a.m. and take two hours to commute to school. I’m pretty upset on their behalf, and I’m sure that’s not the only case where people are frustrated with this decision. It’s really irresponsible of York to think that simply being able to retake the courses we’ve spent half a year on is proper compensation for what’s occurred.”

In addition to the TCO, York has also instituted a bursary for up to $1,500 for undergraduate students who had to make adjustments to their travel arrangements, child care, or rent because of the strike. Many students were unaware of this option. “No one knows how things are working. There’s zero transparency about what policies have changed and what deadlines have been extended,” says Galle.

However, according to Joy, an email regarding the bursary was sent out April 19, and a follow up email was sent out May 2. Joy speculated that students who aren’t receiving the emails may have unsubscribed or had them filtered to the spam folder.