Frustrated by the administration's refusal to cancel classes, students stage a sit-in 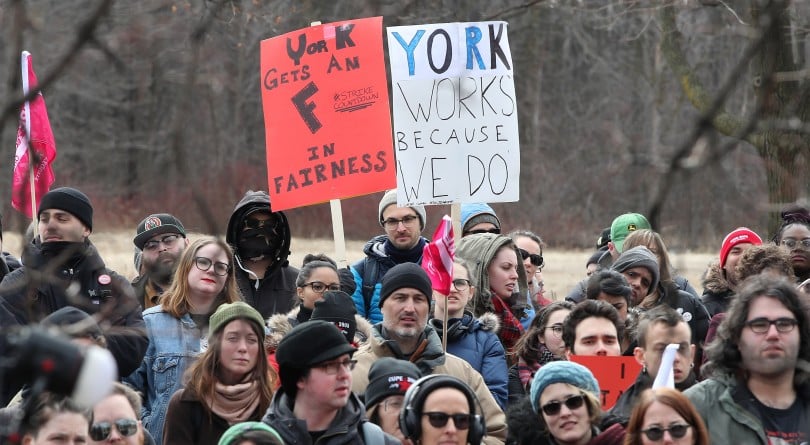 York University‘s senate chamber currently appears very lived-in. There are tables covered in food, cases of water bottles stacked almost to the ceiling, two air mattresses leaning against a wall, piles of board games and books sitting on the desks, school bags strewn all over the floor, and posters hanging from all the walls. Students have occupied the room since March 22 as part of a protest related to an ongoing strike by contract faculty, teaching assistants and other staff.

The occupation began shortly after a meeting to determine whether the senate or the school’s administration had the authority to cancel classes. In a vote, the senate affirmed its ability to suspend lessons during the labour action but no motion to exert that authority was put forward. Shortly after that meeting, several York students entered the chambers and have yet to leave, as part of a protest calling for the cancelation of classes and tuition rebates, among other things. “Once inside, we announced the reclamation of the senate chambers,” says Karmah Dudin, a fourth-year political science student. “The reason this is happening is because we’ve tried other things. We’ve tried starting petitions, we’ve tried reaching out to the administration, we’ve tried holding rallies and protests. None of that has worked.”

There isn’t a single student in charge of the movement. “It’s a very democratic process in terms of how we make decisions. We put everything on the agenda and vote on all decisions,” says Dudin.

Roughly 20 students were occupying the chambers during two separate visits by Maclean’s; organizers say as many as 100 protestors were present at some points. Protestors have access to washrooms on the same floor as the senate chamber but no shower facilities.

Security guards are stationed at the entrance to the chamber, and in front of the elevator leading up to it. “The atmosphere since I’ve been here has been a welcoming one, despite the fact we’re surrounded by security. It looks a lot more intimidating than it is,” says Susi Hermanns, a second-year political science student. The guards have told students they are there for the protestors’ own safety, but Hermanns believes differently. “They’ve been using tactics to try and intimidate us. They’ve been limiting access to the ninth floor [where the Senate chamber is located],” she says.

“They stopped the elevator from going up to the ninth floor on Monday morning [March 26], but we immediately called them out on it, as it’s a disability issue, and by Monday afternoon the elevator was working properly,” says Dudin. “This is detrimental to our well-being because a lot of the people they’re trying to turn away are coming to bring us things like food and water, so if they can’t access the room, it means we could go without.”

Elevator access was temporarily blocked to prevent non-students from entering the chamber, according to Barbara Joy, chief spokesperson of York Media Relations. “We became aware that there were people from outside the York community and striking members of CUPE 3903 accessing the Senate Chambers, and on Monday, March 26, the university wrote to CUPE 3903 executive to request that they ensure their striking members and others from outside our community do not participate in the undergraduate student sit-in,” she says.  “Additional security measures were put in place on Monday, March 26, temporarily.”

According to both Hermanns and Dudin, there was also an altercation between students and security during the senate meeting on March 22, when a security guard used force to remove a student attempting to enter the chamber after being told he could not. “We asked the security guards to let us into the chamber. However, they told us we were not allowed inside. When they opened the doors to let people out, we tried to sneak in, and that’s when one of the security guards grabbed me by the neck and pulled me outside the chambers,” says the student who wishes to be identified only as Pourya.

“I was struggling to get free of his grip. It was completely unnecessary. I still have pain in my neck and jaw from the incident.”

Vice-President Academic and Provost Lisa Philipps says York takes such allegations very seriously, and it is investigating the incident. That wasn’t the only injury, however.  Seven security guards suffered injuries caused by rowdy students protesting and demanding access to the senate chambers.

“Security was doing their best to get senators into the room and make sure they had the space they needed to have that discussion while keeping other people out, so when there was pushing and shoving as other people tried to get into the room there were injuries, unfortunately,” says Philipps. There have been no altercations since then.

The students are demanding the university administration cancel classes immediately, return to the bargaining table, issue a refund to students for tuition for winter courses, and answer for President Rhonda Lenton’s spending. Lenton has become the target of a website that recently surfaced alleging she has been using student’s tuition money on personal expenditures.

In response, Philipps says: “Those expenses were reviewed like any other expense claims at the university, they were consistent with our policy, and are posted online. They are business expenses, not personal expenses.”

According to Philipps, the students in the senate chamber don’t represent all of the undergraduate students on campus. “We’ve had several students urging us to keep classes running because they have a ticket to go home, or a job to go to, or an internship to start, so there are a lot of students who don’t want to see all classes canceled.”

It’s been over a week since students took over the senate chamber, and it doesn’t appear they’ll be leaving any time soon. “We plan on being here until our demands are met, even if the strike does end before that,” says Dudin.

It doesn’t seem York plans to evict them, either. “We don’t have a hard deadline that we’ve given them that they must be out by,” says Philipps. “We don’t think that’s the right approach. These are our students, members of our community, who are expressing their views. We want to make sure they’re safe. But apart from that we don’t have any plans to force an end to the situation.”