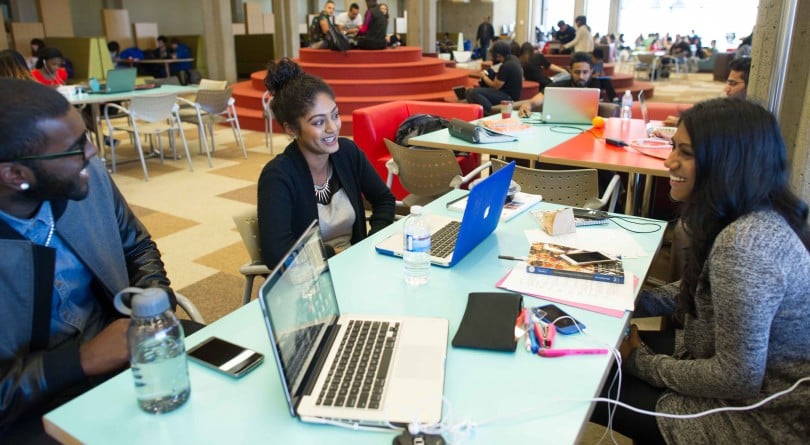 Best place for a nap: The Student Centre
Best cheap lunch: Z-teca (be prepared to spend at least $10 for a meal—nothing on campus is cheap)
Best hangover breakfast: Berries & Blooms’ $4.99 breakfast special comes with bacon, sausage, two eggs and garlic potatoes
Favourite watering hole: Shopsy’s
Best place to study: With so many students—especially commuter students—there really aren’t a lot of options to study quietly on campus
Worst place to study: The Collaboratory—like a library, only louder
Best campus event: YorkFest
Best giveaway: Falafel Hut’s free shawarmas during YorkFest
Best live music venues: The Aviva Centre
Weirdest tradition: Getting attacked by a goose (they get really aggressive in late spring after their mating season)
Best spectator sport: Soccer (best team in the country)
Unofficial school motto: ‘Getting York’d’
Best place to live: For res, it’s Calumet; otherwise, the village
Most notorious bus route: The new 41 (used to be the 196, but it has been retired now that the subway is finally up and running)
Most original social event: YorkFest’s Disney Karaoke

Yorks a pretty interesting school; we pay some of the highest tuition rates in the country to attend the least amount of class . . . because the staff is always on strike.

Situated on the border of Toronto and Vaughan, York is in the middle of nowhere, so it can be a hassle to get to for students living in the Greater Toronto Area (GTA). Many students who don’t want to commute—or come from out of town—live in “the village,” a nearby neighbourhood. It makes commuting easier for students (pretty much every house is within walking distance), but it’s also known to be a rough area, so walking in groups is highly recommended at night. (York provides a shuttle service at night for students in the village, as well as a chaperone service known as goSAFE for those on campus.)

York is a huge university, with more than 45,000 undergraduate students alone, and there are always lots of protests and rallies being held; for those interested in politics and activism, York is a hotbed of activity. With more than 300 accredited groups and clubs on campus, there’s something for everyone.

Extras
The creative writing program offers a reading series that features authors from all over Ontario; last year, it included Camilla Gibb, Canisia Lubrin and Adam Sol. The music department organizes live performances throughout the year, including their Jazz @ Midday events, which feature performances by faculty members.
The gym organizes tons of intramural activities, including popular sports like basketball and hockey, and more obscure ones such as Jorkyball and inner tube water polo. All are free to enjoy.

Local Vibe
Toronto is a great city if you enjoy a fast-paced lifestyle. There’s so much to see and do that it can sometimes be overwhelming. I’m originally from Ottawa, which isn’t such a small town, but it was still an adjustment when I first moved here. It’s a great city—there are so many great cultural events to experience; there’s a team for any type of sports fan; there are so many great restaurants featuring authentic cuisines from all over the world; there are great places to shop or just visit like Kensington Market, the Distillery District, the Beaches and so many others; and there are so many festivals, like Pride, the Toronto Light Festival and Caribana to name a few.
If you decide to come to York, be prepared to fall in love with Toronto.

The Skinny
BlogTO always has the best lists of places to go, events to attend and activities to partake in.