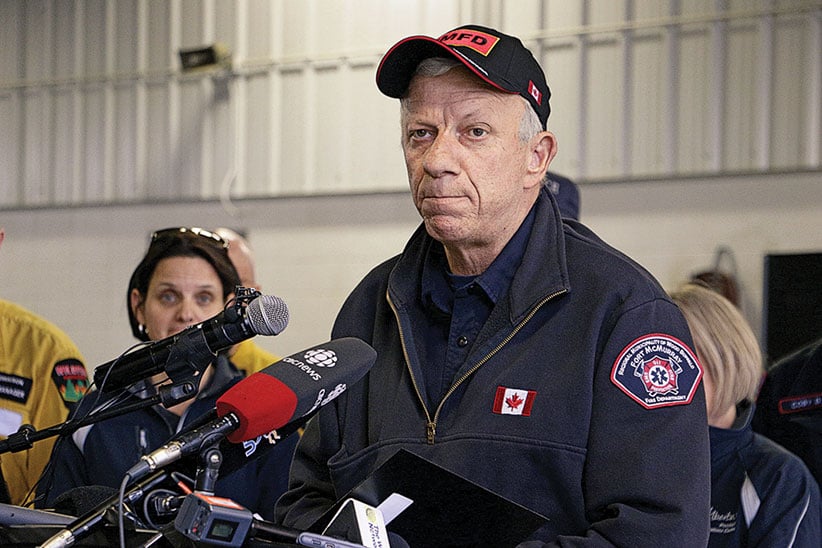 Our annual Newsmakers issue highlights the year’s highlights, lowlights, major moments and most important people. Read our Newsmakers 2016 stories here, and read on to see why Darby Allen made the list as one of our seven Newsmakers of the Year.

Newsmaker: Trump
Best/worst of business
Heroes and villains of 2016

First responders have a way of making the dire sound routine. Drivers don’t crash; they “fail to negotiate the curve.” A home engulfed in flames is “fully involved,” as opposed to going up in a terrifying inferno. So when Darby Allen described the wildfire that lay dormant on the edge of his city as a sleeping “beast,” it was the Fort McMurray fire chief’s version of a shrieking alert. “It will wake up,” he warned prophetically at a morning news briefing on May 3. “It will come back.”

The day had broken clear, with no visible evidence of the 2,600-hectare blaze that had menaced the community the night before. But the smoke, Allen knew, was lying low under a temperature inversion, while the embers waited only for prevailing midday winds to fan them back to life. So he resorted to a rhetorical flourish he hoped would keep 90,000 residents on their toes. “There’s a very fine line between alerting people and panicking them,” the 59-year-old now says. “But I think people who knew me understood that I wasn’t feeling overly good.”

“The Beast” would become the fire’s unofficial name, and Allen a figure linked with the astounding events that followed. As he’d feared, the fire escaped the control of provincial crews, devouring homes in the city’s southern reaches before leaping the kilometre-wide Athabasca River to advance on its northwest neighbourhoods. A day later, some 1,958 of the city’s structures, or 10 per cent, lay in ashes, while the oil sands town’s centrality to Canadian life came into bold relief—everyone knew someone affected. But it was the human response that made this event so singular. Somehow, improbably, the entire population escaped the flames that day without a single fatality, many running a canyon of 30-m flames in what is thought to be the greatest fire-related evacuation in Canadian history (the following day, alas, two teenaged evacuees died in a highway accident 150 km to the south).

Footage that the evacuees filmed during their mass flight captured the scope of this miracle: cars, trucks, SUVs and recreational vehicles stuffed with humans and pets and household possessions crawled in a phalanx down the only highway leading south, embers falling around them, the paint on their vehicles blistering from the heat. Order prevailed despite the horrifying stakes. As Winnie Lachica, a city bus driver who fled with his wife and kids, later told Maclean’s: “If even one car blows up from the heat, we would all die there. There is no way out. We would be trapped.”

Media depictions would set up Allen as a folk hero—a chieftain touring the field after battle, or rallying the troops in his Birmingham dialect (he hails from England’s West Midlands). In truth, he was no less aghast than Lachica. A 15-year veteran of the Calgary fire department, he arrived in Fort Mac in 2009 aware of wildfire risk. But like everyone else, he thought it could be managed. Over the last seven months, he’s been coming to terms with those assumptions, weighing the triumph of the great escape against the appalling risk in which it placed his fellow citizens.

His appreciation has deepened as he watches Fort McMurray rebuild. By mid-November, 1,600 destroyed home sites had been cleaned up for reconstruction, while all those still standing had been declared fit for residents to move back in. Since the fire, he’s taken notice of natural disasters around the world—flooding, typhoons, tornadoes, observing that many involved fatalities even though they weren’t anywhere near as serious as what Fort McMurray went through. “It just reminds me how incredibly fortunate we were,” he says. “I’m not a deeply religious man, but something was shining down on us that day, something that enabled all those people to get out safely. Whatever it was, I thank it very much.”