Ready for Rio: Why Theisen-Eaton relishes rivalry with Ennis-Hill

'If you’re an explosive person and you’re fast, that’s pretty much the base you need,' says the contender who hopes to win Canada's first heptathlon medal 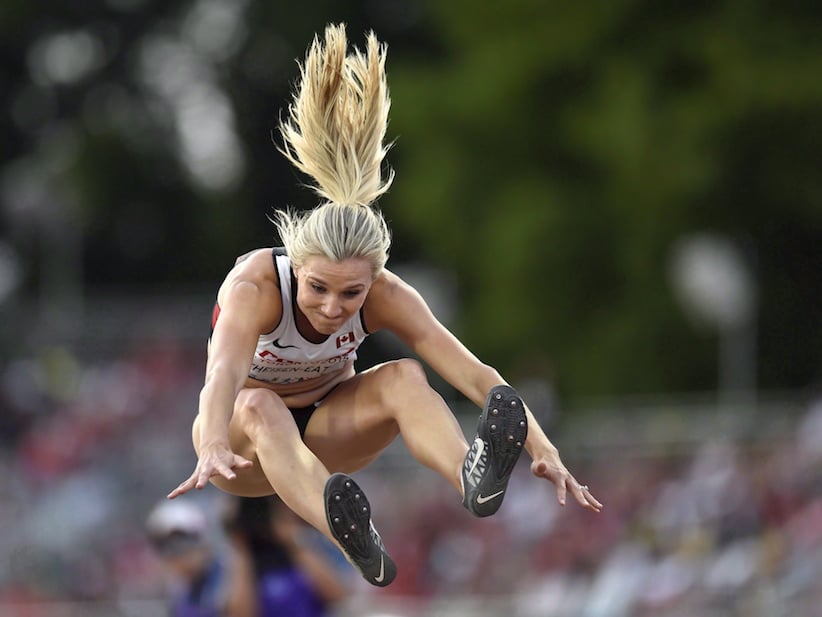 Brianne Theisen-Eaton, of Canada, competes in the women’s long jump final during the athletics competition at the 2015 Pan Am Games in Toronto on Friday, July 24, 2015. Theisen-Eaton set this year’s best mark in heptathlon to win the Hypo Meeting for a third time on Sunday. THE CANADIAN PRESS/Frank Gunn

Brianne Theisen-Eaton feathers the air with her hand like she’s demonstrating the movement of an ocean wave. She’s doing her best to describe what athletes call “flow”—a heightened state of performance achieved when pressure dissolves. “It’s the most spectacular feeling, and the performances are phenomenal,” says the 27-year-old heptathlete from Humboldt, Sask.

Last summer, at the IAAF World Championships in Beijing, Theisen-Eaton was about as far away from flow as she’s ever been. Entering the competition ranked No. 1 in the world, she faltered on day one, sitting fourth after four events. The University of Oregon product fought her way to a silver medal, but admitted afterward that she’d experienced a wild swing of emotions. “I went in saying, ‘I have to win the gold medal,’” she says. “I really had no handle on my mental state, my emotions—like being able to control anxiousness and nervousness and stress and pressure.”

This year, Theisen-Eaton says she won’t be agonizing over points and results—at least not until the 800-metre, the final event.

In 2015, Theisen-Eaton set a Canadian record and a personal best of 6,808 points. She enters Rio a strong contender to win Canada’s first-ever Olympic medal in heptathlon, and she’ll be relying on her speed and power to get her there. “If you’re an explosive person and you’re fast, that’s pretty much the base you need,” she says. But the sport is also a balancing act. “You feel underprepared in every single event.”

To win gold, she’ll need to beat reigning Olympic and world champion, Great Britain’s Jessica Ennis-Hill. Theisen-Eaton relishes their rivalry. “I think that’s why most athletes compete, because they have people to push them,” she says. “I’m looking forward to that. I think it’ll be a battle.”