Today at the DNC: Hillary, history and hostility 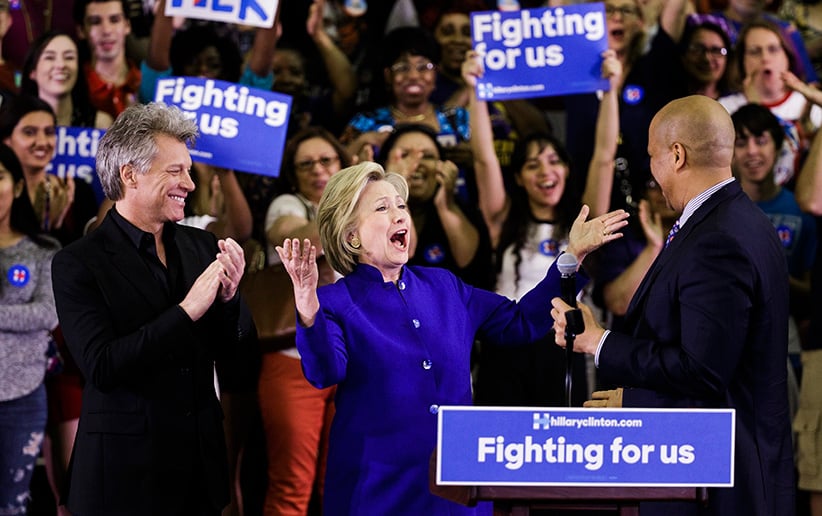 PHILADELPHIA — A glass ceiling is shattering at the Democratic National Convention as Hillary Clinton ascends to the presidential nomination with Tuesday’s roll call of the states, making her the first woman to lead a major party into a White House race.

Clinton’s campaign hoped to use the achievement to bolster the candidate’s popularity — mindful that while many voters are happy to be nominating a woman, they’re not wild about this particular woman candidate. Former President Bill Clinton and other speakers will offer prime-time testimonials to her career highlights and advocacy, hoping to soften her image and resistance to her bid.

But as history is being made, hostility is being heard, too. Bernie Sanders’ primary challenge has unleashed vitriol toward the party establishment that Sanders himself has been unable to rein in. His supporters, many new to party politics, spent much of Monday protesting his treatment by top officials, even booing Clinton’s name.

The division left what was once expected to be a tightly orchestrated convention, run with all the professionalism and experience that were lacking at Republicans’ often-chaotic coronation of Donald Trump last week, showing rough edges in the early going.

On Tuesday, Sanders, who has endorsed Clinton, tried to keep the conflict from consuming another day and marring a history-making moment. This is an “unbelievably critical moment” for Democrats, he told Wisconsin delegates in the latest of a string of pleas for unity.

First lady Michelle Obama delivered the same message Monday night in a heartfelt endorsement of the candidate who engaged her husband in a fierce struggle for the nomination in 2008. “I trust Hillary to lead this country,” she said in a speech that provided a parent’s-eye view of the White House and its power.

While Mrs. Obama has often avoided overt politics, she did not shy away from taking on Trump. Without naming him, she warned that the White House couldn’t be in the hands of someone with “a thin skin or a tendency to lash out” or someone who tells voters the country can be great again. “This right now, is the greatest country on earth,” she said.

Liberal favourite Elizabeth Warren, senator from Massachusetts, and Sanders himself also did their part to bring along the Sanders’ fan, some of whom were in tears by the time the Vermont senator took the stage to shouts of “We love you, Bernie.”

While asserting “our revolution continues,” Sanders argued that on issues of poverty, immigration, environmental protection and more, Clinton’s election counts.

Some delegates said the messages did the trick.

“As the night went on, we saw a party grow stronger,” South Carolina delegate Boyd Brown said after the first day speeches. Other planned to keep up the public displays of displeasure. “Civil disobedience is the cornerstone of Democratic values,” said Gabriel McArthur, a Sanders delegate from suburban Denver.

Where Monday’s opening night lineup showcased diversity — with black, Hispanic, gay and disabled speakers — Tuesday’s program will undoubtedly play up Clinton’s historical milestone and make an overt appeal to women voters who see it as long overdue.

“Fifty per cent of our country is men, where I’m doing very, very well,” he began in remarks Monday night in North Carolina. “That’s the good news. Let me give you the bad news: The women. I don’t know what’s going on with the women here. But I think, I think I’m doing well with the women.”

Clinton was firmly on track to write the next chapter of a story that left off in 2008, when she conceded the Democratic presidential race to Barack Obama in a speech that lamented “we weren’t able to shatter that highest, hardest glass ceiling this time,” but added proudly, “it’s got about 18 million cracks in it,” a tally of her primary votes.

The roll call, when each state announces its delegate totals from the primary season, will affirm a nomination Clinton locked up weeks ago. One question of the day was whether Sanders would press for a count by all the states, as his delegates want, or interrupt the process to ask that her nomination be approved by acclamation. That’s what Clinton did on Obama’s behalf in 2008 to indicate their rivalry was truly over.

Sanders suggested Tuesday he wouldn’t rush to make that gesture early, mindful that cutting off his restive voters could cause an outcry. In a round-table interview with Bloomberg Politics, he said he still thinks his delegates should be able to vote for him during the floor vote.

Once the nomination is sealed, the Clinton campaign planned to turn to a Day 2 program dubbed “Fights of Her Life,” highlighting her advocacy for children, health care and Sept. 11 recovery efforts, the campaign said.

The speakers also will include the so-called “mothers of the movement” — the mothers of Eric Garner and Michael Brown, black men whose deaths at the hands of police helped spawn the Black Lives Matter protests.

The moment will not be without controversy: Philadelphia’s police union complained that Clinton was showcasing killings by police without giving equal time to the families of fallen officers. Clinton’s campaign responded that two members of law enforcement also are on the convention schedule.