Only hours before the reversal, Trump repeated the false allegation with no mention of sarcasm at a rally in Florida 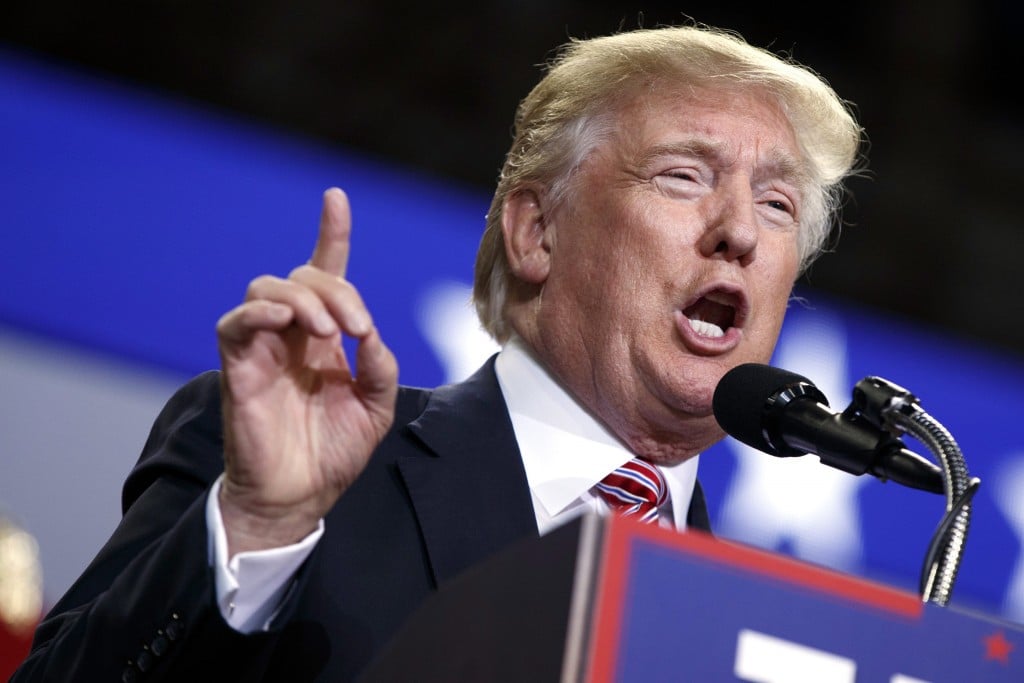 Trump, in an early-morning post on Twitter, blamed CNN for reporting “so seriously” that he had called Obama and Democrat Hillary Clinton the extremist group’s founder and most valuable player. He added, in all capital letters: “THEY DON’T GET SARCASM?”

Ratings challenged @CNN reports so seriously that I call President Obama (and Clinton) "the founder" of ISIS, & MVP. THEY DON'T GET SARCASM?

Only hours before, the billionaire businessman had restated the allegation with no mention of sarcasm, telling rally-goers in Kissimmee, Florida, that “I’ve been saying that Barack Obama is the founder.” It’s a claim that Trump repeated at least a dozen times in three cities since debuting the attack-line Wednesday during a rally outside Fort Lauderdale.

In fact, Trump had refused to clarify that he was being rhetorical or sarcastic when asked about the remark during interviews. On Tuesday, when conservative radio host Hugh Hewitt tried to steer Trump toward explaining he really meant Obama’s Mideast policies created conditions that IS exploited, Trump wanted none of it.

“No, I meant he’s the founder of ISIS. I do,” Trump said, using another acronym for the extremist group. Told that Obama was trying to defeat the militants, Trump added, “I don’t care. He was the founder.”

The controversy over the Islamic State has dogged the campaign in a week in which he has been trying to highlight his economic proposals. Trump is encountering worrying signs as his campaign moves into the November election. Clinton’s lead over Trump in national polls has widened in recent days, while a growing number of fellow Republicans have declared they won’t support their own party’s nominee.

Clinton is looking to take advantage by expanding into traditionally Republican states, seeking a sweeping victory in November.

It wasn’t immediately clear why Trump altered course Friday and said the whole notion was sarcastic. But the allegation had elicited fresh concerns about Trump’s relationship with the truth and his preparedness to be commander in chief.

Clinton’s campaign has cried foul and accused Trump of mimicking Russian President Vladimir Putin’s talking points, and the Democratic Party had asked for an apology.

“I just do not think insults and bullying is how we are to get things done,” Clinton said as she laid out her economic plan Thursday in Warren, Michigan.

Yet even as he worked to quell one campaign controversy, Trump appeared to spark another late Wednesday when said he was “fine” with trying Americans suspected of terrorism in military tribunals at the Guantanamo Bay detention centre. Asked specifically about U.S. citizens, Trump told the Miami Herald that he didn’t like that Obama and others wanted to try them in traditional courts.

“I would say they could be tried there,” Trump said, referring to Guantanamo Bay. “That’ll be fine.”

Trump has blamed Obama’s decision to pull U.S. forces from Iraq in 2011 for destabilizing the Middle East and creating a situation in which Islamic State militants could thrive. He’d added Clinton to the mix by noting her initial support for the Iraq War and her ties to Obama’s policies as his first-term secretary of state. However, Trump previously had said he wanted U.S. troops out years earlier than Obama withdrew them.

The founder of the Islamic State group was Abu Musab al-Zarqawi, the head of al-Qaida in Iraq who was killed in a U.S. airstrike in 2006. The group began as Iraq’s local affiliate of al-Qaida, the group that attacked the U.S. on Sept. 11, 2001.

GOP concerns about Trump are compelling enough that dozens of worried Republicans were gathering signatures for a letter urging the party’s chairman to stop helping Trump and focus on protecting vulnerable House and Senate candidates, according to a draft obtained by the Associated Press. Trump said he wasn’t worried Republicans would cut him off – and threatened to stop fundraising for the party if they do.

Trump’s campaign planned to sit down with RNC officials in Orlando on Friday. But both Republican Party officials and Trump’s campaign said the meeting was focused on campaign strategy in battleground states like Florida, and not tensions between the campaign and the GOP. The officials weren’t authorized to comment publicly and requested anonymity.