What needs to happen for Trump to win in November

Donald Trump's poll numbers are sagging just a week after he pulled even with Hillary Clinton. A few swing states and split votes could help his cause. 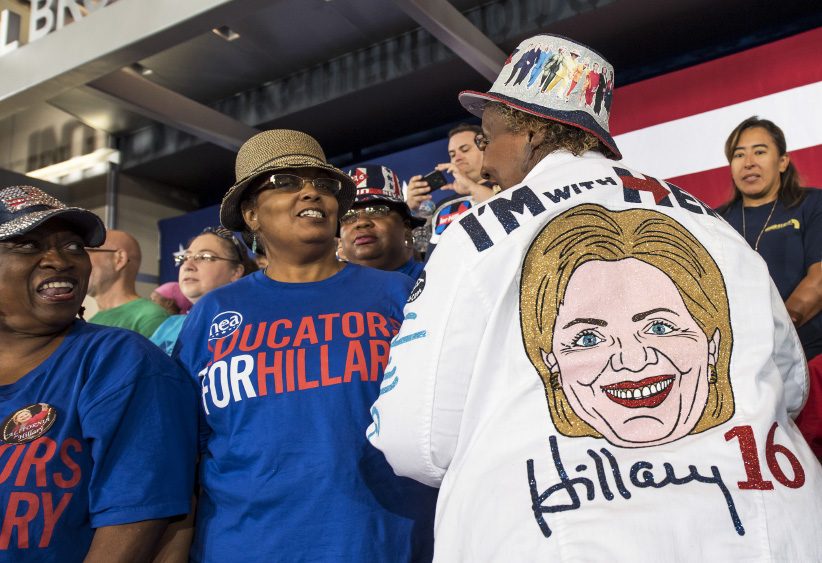 Reports of the death of Donald Trump’s campaign have been greatly exaggerated. Yes, Trump is having a bad week. He’s been blasted by just about everyone for attacking the family of a deceased soldier; both President Barack Obama and a former CIA chief called him unfit to hold office. But no, the race is not over.

This week’s headlines are filled with speculation that Trump might drop out of the race, fuelled by anonymous Republican power brokers who have hated Trump for months and have little communication with, let alone control over, his campaign.

One thing is clear: Trump is dropping in the polls. Clinton currently leads Trump by 6.8 per cent according to a running average of national polls. One week ago, they were tied at 44.3 per cent. 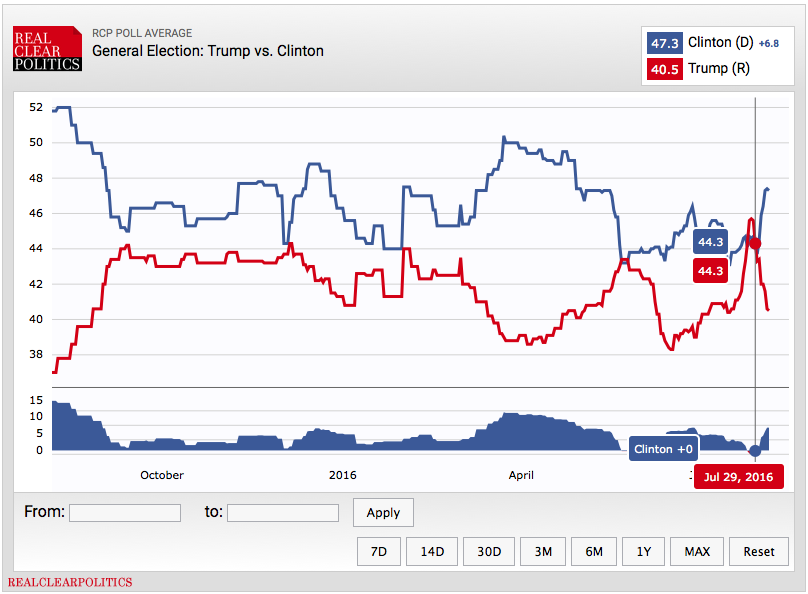 Some of the bump can be attributed to four days of non-stop Hillary Clinton coverage at the Democratic National Convention. Candidates typically see a bump after their conventions because their supporters are more energized, and therefore more likely to respond to polls. The most recent numbers look particularly good for Clinton. 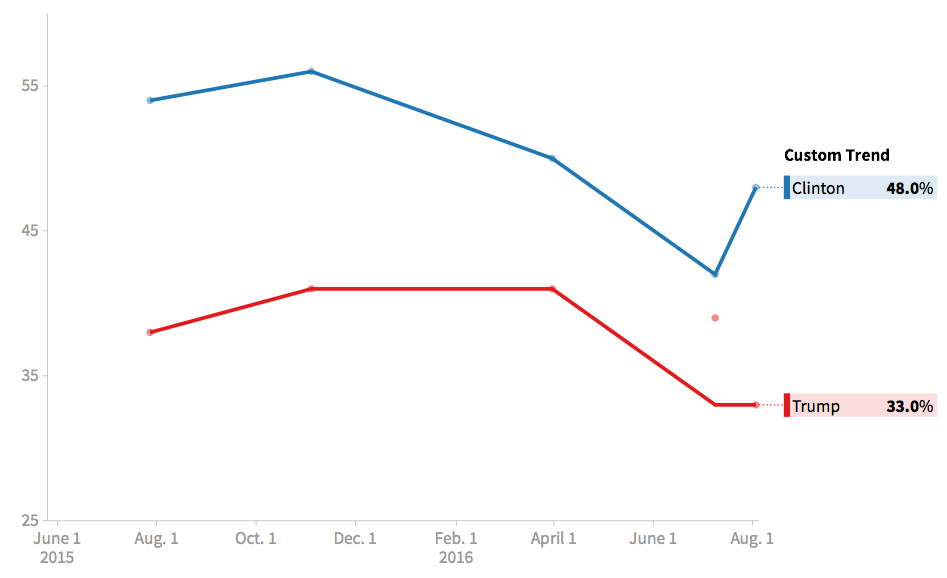 The Mclatchy/Marist poll illustrates the volatility of the race. Clinton has 48 per cent to Trump’s 33 per cent, but five per cent of voters are undecided and, when forced to choose between the two candidates — 14 per cent selected neither or other. When given the option to pick from the four leading candidates, Clinton gets 45 per cent, Trump 31 per cent, Gary Johnson of the Libertarian party gets 10 per cent, and Jill Stein of the Green Party gets six per cent. But nine per cent still selected other or undecided. Depending on how you look at it, between one fifth and one quarter of people aren’t yet willing to vote for Trump or Clinton. That leaves a lot of room for Trump to bolster his support (or for Clinton to solidify her lead).

Regardless of national polls, a few key swing states are generally good bellwethers for how the rest of the country will vote. In Georgia, an Atlanta Journal-Constitution poll conducted Aug. 1-4 gave Clinton a four-point lead in a two-way race against Trump. Framed as a four-way race, however, Clinton’s lead drops to three per cent with Johnson getting 11 per cent and Stein two per cent. If Clinton can siphon off some of Stein’s left-wing supporters (Bernie Sanders wrote an op-ed today in which he urged his supporters to vote for Clinton, which could help that effort), she can extend her lead in traditionally Republican states like Georgia. However, if Trump can shift even one third or one half of Johnson’s supporters, states like Georgia are looking a lot better for him.

Clinton enjoys significant leads in the latest polls from traditional swing states. She’s up six per cent in Florida, 10 in Michigan, and a remarkable 11 in Pennsylvania. The last poll from Ohio, conducted July 22-24, put Trump up three per cent. Clinton’s leads in those swing states make it incredibly difficult for Trump to win enough votes in the electoral college to become president. In 2012, Obama won Florida by 0.9 per cent, Ohio by 1.9, Pennsylvania by 5.2 and Michigan by a solid 9.5.

Two-hundred and seventy electoral college votes are required to win the presidency. Mitt Romney scraped out 206 in 2012, when Obama won with 332. If Trump can win Florida, Pennsylvania and either Michigan or Ohio, and hold everything Romney won in 2012—which is far from certain; Romney won Georgia by eight per cent—than he would win the presidency. That seems pretty unlikely today, but remember that Trump was tied in national polls just a week ago.

Some of Trump’s decline is undoubtedly related to his actions. By refusing to endorse Paul Ryan or John McCain, both of whom are facing Trump-inspired primary challengers, he’s alienating the Republican establishment just as Obama and Clinton are blasting him as uniquely dangerous and unqualified. The support Trump has managed to attract from that Republican establishment, however grudging, has helped his attempts to downplay some of the more alarmist warnings coming from Clinton and other Democrats as left-wing propaganda.

Clinton released an attack ad this week featuring neoconservative foreign policy experts saying they don’t trust Trump with the nuclear codes, and trotted out three billionaire supporters in an attempt to undermine Trump’s claims of business acumen. Clinton’s explicit appeal to traditional Republican voters may take support away from Johnson the Libertarian, but it might also hurt her as she tries to solidify her support among former Sanders supporters. Some Sanders holdouts are shifting to Stein, the Green leader, because her policy broadly aligns with Sanders’ own promises. Others, albeit a minute number, are moving to Trump, lured by his anti-establishment rhetoric. Clinton’s continued rightward shift could push more voters out of her camp, but she clearly feels she’ll win even more Republicans looking for a business-friendly candidate and a military hawk. Whether this strategy will work, of course, remains to be seen.

As for Trump’s strategy going forward: If his poll numbers climb, he’ll be able to ignore the Republican establishment’s attempts to reign him in. How will he manage that feat? He’ll do what he does best: say outrageous things to get free media, and hope that all translates into votes on Election Day.