With the Raptors' win, Toronto leaves the agony behind

Alireza Naraghi: To be a Raptors fan in this city today is to be reassured that the narrative is never settled. There is hope. 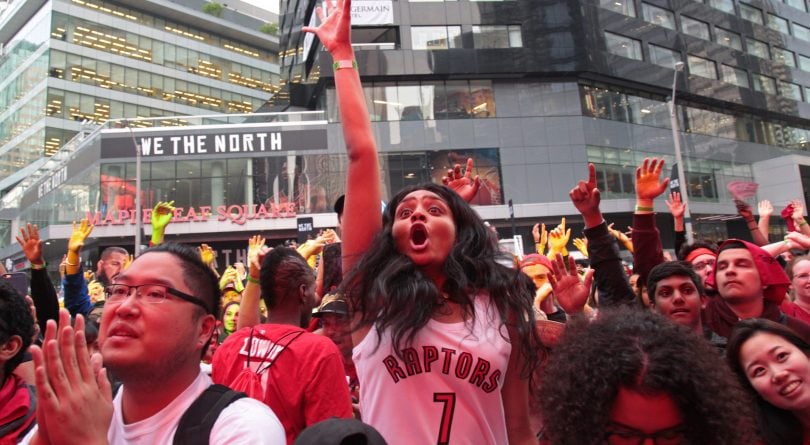 When Vince Carter hobbled off the court early in the third quarter against the Detroit Pistons 15 years ago in what would be his last game in the Toronto Raptors uniform, you could almost hear the collective groan from basketball fans on the northwestern shore of Lake Ontario.

As a diehard Raptors fan who moved to Canada during the franchise’s inception, I had an immediate connection to the team and the game. I’ve often wondered whether it was the Raptors who chose me, rather than the other way around, because we seemed made for one another: years of underachievement and pressure from loved ones to succeed; a constant struggle to fit in; a seemingly infinite capacity for self-destruction; an undeniable feeling of insecurity.

I vividly recall that infamous game the Raptors lost to the Philadelphia 76ers in the 2001 Eastern Conference semifinals, after Carter missed the buzzer-beater—that crushing sense that “this city might be cursed.” For Toronto, which hadn’t won a title in a major sport since the Blue Jays in 1993, losing big games in catastrophic fashion was an all-too-familiar script.

To be a Raptors fan in this city today, then—as the car horns honk and the beer flows and the sports pundits sing the team’s praises—is to be reassured that the narrative is never settled. There is hope. When Kawhi Leonard beat the buzzer with a high-arcing jump shot that bounced on the rim four times before sending the Raptors past the Sixers in Game 7, he erased deep-rooted demons that have shackled this team and this city and us fans for more than two decades. Same goes for the landmark win over the Warriors on May 30—the Raptors’ first in the NBA Finals.

On that night, roars rose through practically every Toronto neighbourhood, as if the Raps had won the whole series. I stepped onto my balcony and screamed, “LET’S GO!” Within seconds, I heard replies from every corner, as if they were waiting for me to release those complex emotions. It was a feeling that could only be described as an exorcism, when you’re shedding years of affliction in one satisfying scream.

Overstatement? Maybe, but consider the context. This championship comes at a time when the city is in the throes of a housing-affordability crisis; when many of its inhabitants feel like they’re on the outside looking in; when homelessness, gentrification and a deficit in our sense of belonging are serious political issues—especially among the young.

If you don’t believe in the power of sport to uplift—to reset those kinds of feelings in a way that is good for the community as a whole—listen to Matthew Edwards, who came out to a recent publicity event to have his picture taken with the NBA championship trophy. He’s a long-time Raptors supporter who grew up in Toronto and remembers watching the Blue Jays’ 1993 World Series win with his father when he was nine. To be a Raptors fan, he says, is to have a special makeup.

“Toronto is a rugged city, with horrible winters and the affordability problems in neighbourhoods,” he explains. “And it’s been treated as the laughingstock of the league. Now there’s a positive vibe, a feeling of being proud, and a big part of it is the success of this team. It’s been a long time coming. It almost feels like a dream.”

Edwards says the team’s playoff run has been a catalyst for solidarity that transcends racial divides. On days when you feel things are not working out, he says, “you could come home or hang with friends and forget about all the negativity in your life, because this team is making us proud and restoring so much confidence in communities.”

It’s the kind of unity that comes about only after long periods of collective suffering, and any Raptors fan can reel off the list of traumas and abrasions: the trade that sent away Carter, the face of the franchise; losing to Brooklyn in the 2014 playoffs in a Game 7 heartbreaker; Kobe Bryant racking up 81 points in a game; getting swept by the Wizards in the 2015 playoffs. These events amounted to a death grip of failure that pervaded the Raptors fan psyche throughout these 24 years.

But the plot changed this year, and let history show that new hopes bloomed before the Raptors’ season started.

“Guys, the narrative of not wanting to come to this city is gone,” said president of basketball operations Masai Ujiri, who has steadily transformed the Raptors into one of the NBA’s top teams. “Believe in this city, believe in yourselves. Here in Toronto, we have to believe in ourselves, right?”

These words came after the blockbuster trade that landed Leonard. It was a gutsy move that ignited a feeling of confidence for many fans, who were experiencing complicated emotions in saying goodbye to their four-time all-star DeMar DeRozan, one of the most loyal players ever to wear a Raptors uniform.

Let’s be honest: there was still fear it was all going to come crashing down, especially for younger sports fans in Toronto, who’d grown up without knowing what winning a major championship feels like.

But if they’d gotten no further than Kawhi’s astonishing, series-winning shot against Philly, they’d already have won. That’s because as much as this story is about winning a championship, it is also about progress. The Raptors have completed their transformation into a respected franchise, and they’ve reconstructed that fragile fan psyche.

And me? I happened to catch a ride on their journey of growth—along with a few million other people—that I will remember all my life and never take for granted. I believe in my team, I believe in my city, I believe in myself. The Raptors and I have finally arrived.