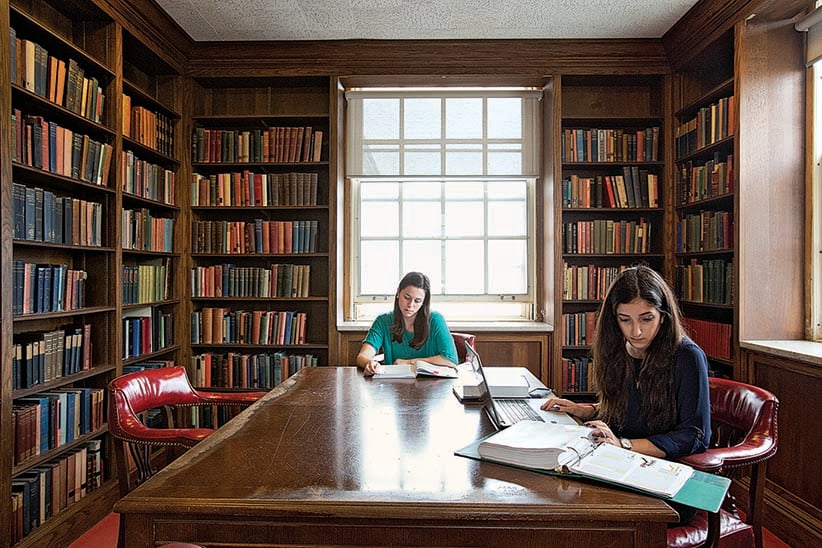 Students study in the Beaverbrook room (also known as the Harry Potter room) in the Harriet Irving Library at the University of New Brunswick. (Andrew Tolson photo)

First published in August 2011, this feature goes gangbusters every fall. In September 2015, we updated the story with more good advice from our readers. If you have tips, please leave them in the comments.

This probably isn’t the advice your mother would give you. She’s going to tell you to get involved as much as possible, to do all of your readings and to stick with whatever degree you’ve chosen. But as someone who graduated with a master’s degree in 2010, I think I know better than mom about what works and what doesn’t. Here are the Top 10 things that I wish I’d known in first year.

1. Meet your professors in person.

Guess how many e-mails a professor who teaches your 600-student course receives each week? It’s a lot of e-mails. That’s why it’s important to make personal connections by visiting them during office hours or by asking them questions after a lecture that particularly grabbed your interest.

Knowing professors personally is important. They can provide career advice, write reference letters for graduate school and will be more willing to supervise your honours thesis or special project. Plus, if they know you, they may go easier on you should you ask to hand in an essay late.

After a few months of my Bachelor of Commerce degree, I realized that endless group projects with people who are only interested in making a lot of money wasn’t the right education for me.

Thankfully, I had a teacher in a history course who showed me the value of learning for the sake of learning and who was able to articulate the many ways that history majors can make money — including writing — a career that I hadn’t considered. It wasn’t difficult to switch to the Bachelor of Arts. I simply took an extra summer course to catch up. Now, I’m much happier for having switched.

It’s tempting to pick the professors who have the highest ratings on RateMyProfessors.com. But often, the best ratings are awarded to professors who give everyone As. That’s fine if all you’re looking for is easy marks. But if you’re there to be inspired, you need to find professors who sound like they’re speaking to you personally in lectures. You can only find that out by attending a class.

That said, you can avoid getting stuck with a bad lecturer by going to the first class and then asking yourself whether you learned anything. If you were bored by lecture one, drop the course and find a new one. You can switch courses in the first few weeks of any semester without any penalty. If there aren’t other courses available, you can always enroll in a distance education class.

4. Learn to use the library in semester one.

There’s nothing more boring than journal search strategies and citation rules, so I’ll get to the point. Learning how research is painful, but taking the initiative early on will pay off. Every library offers an orientation to research. For some reason, these sessions are often during Frosh Week when students are least motivated to attend. Still, drag yourself out of bed one morning, shower, and go.

5. Don’t even try to do all your readings.

The rule most professors follow when assigning readings is to give two hours of preparation for every hour of class. Considering that each class is three hours per week, that would mean a full-time student who did all of her work would spend 45 hours on class and prep alone. That’s before essays, labs, exams, extracurricular activities and a modest social life. There just isn’t the time.

That’s why it’s important to triage. Decide which readings, assignments and courses require the most attention and attend to those first. If you try to do all the readings for psychology, for example, you might never get started on your English essay or biology homework, which may be worth more.

Sure, you can try to do as much reading as possible. But when you inevitably run out of time, just read the chapter summary. You can usually glean enough understanding from that to make your impending lecture worthwhile. Just don’t make a habit of reading chapter summaries alone.

6. If you get a bad professor, fire them. Then hire a tutor.

University math classes are generally taught by some math genius who can think of nothing more tedious than having to teach first-year students derivation. He shows up at class each week and clicks through pages and pages of proofs that are interspersed with yawns and the word ‘therefore’. This method is ineffective for the 95 per cent of students whose brains aren’t wired for math.

I learned this after nearly failing first-year calculus and then nearly failing second-year calculus. But I hired an Austrian taskmaster tutor partway through the second semester and she taught me everything that I needed to know, all in a five hour-long boot camp. It only cost $125. I got a 74 in the course. Sadly, the University of Guelph never refunded the $1,400 I paid for those two useless courses.

Working during school can reduce your debt upon graduation, which makes the first few oh-so-precarious years of your working life far less stressful. Trust me, even with scholarships, money from my summer jobs and donations from my parents, I still needed to take on student loans.

Now, I’m paying back those loans a the painful rate of $600 each month for the next seven years — all because I thought I couldn’t handle a part-time job during school. Research shows that jobs don’t impact your studies, so long as you work 10 hours or less per week. I wish I’d known.

8. Be obsessed with the requirements to graduate.

Meet with a program counsellor at least once per year to make sure you’re on track to satisfy all of the requirements for graduation. Many people end up taking a costly fifth year of school because they misunderstood what counted as a science elective or a fourth-year history seminar.

Other students get stuck because they don’t realize that the courses required for graduation may be there one semester but *poof* are gone the next. Sure, they’ll be offered again, but sometimes not in time to fit in with your master plan for life. So, if a prerequisite is available now, take it now.

If a course you need is full, go to the first lecture anyway. In most cases, someone will drop out by the second lecture. If no one drops, ask the professor to “sign you in” above the limit. Most will.

University presents the best excuse you’ll ever get to travel overseas through exchanges, semesters abroad and volunteer programs. Once you start working, you can forget about extensive travel as you’ll probably only get a few weeks of vacation per year from whatever corporation hires you.

In most cases, tuition won’t cost more, cost of living will be similar or lower to that in Canada and the main extra expense is the flights. You could see Paris in Spring, spend the winter surfing in Australia or study ancient Indian history while floating down the Ganges — all while earning credits.

I took a semester in London and it was one of the best periods of my life. In a foreign city, just walking outside is a learning experience. London also served as a base for jaunts to other European locales.

You’re going to meet someone who is not only trying out for the volleyball team, but is also running for student council, volunteering for Meal Exchange and collecting signatures to start a new club.

Don’t let his enthusiasm get you down. Not only is this person unlikely to have many friends, he’s also too busy scurrying from one activity to the next to absorb much from of any of them. The truth is, he’s highly involved because he thinks that more extracurriculars will get him into law school.

Luckily for you, admissions committees know about such busy bodies. And they much prefer that you find one or two things that you enjoy and that you’ve dedicated yourself to deeply. They want proof that you’ve benefited an organization, learned new skills, and developed real relationships, which can’t be done if you’re a member of every club. And remember, a good reference letter is better than a three-page resume.