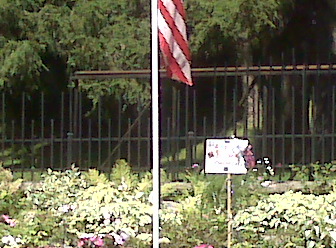 I’m currently outside the back entrance to the US Ambassador’s residence with a few dozen other members of the working press, although technically, right now we’re not so much working as standing around, waiting for the security sweep to get underway. This is a funny event, as these things go—it’s considered a major coup to get an invite, but they actually let reporters hang around after the official program as regular guests.

2:39:09 PM
Well, we’re now officially swept and secure, and inside the residence—or, more accurately, inside the grounds. I’m pretty sure they won’t let us into the house, but that’s okay because it’s utterly gorgeous out here; colouring-book blue sky with the occasional fluff of cloud, a light breeze and not even the slightest bit of skinmelting humidity that usually envelops Ottawa from July til October. 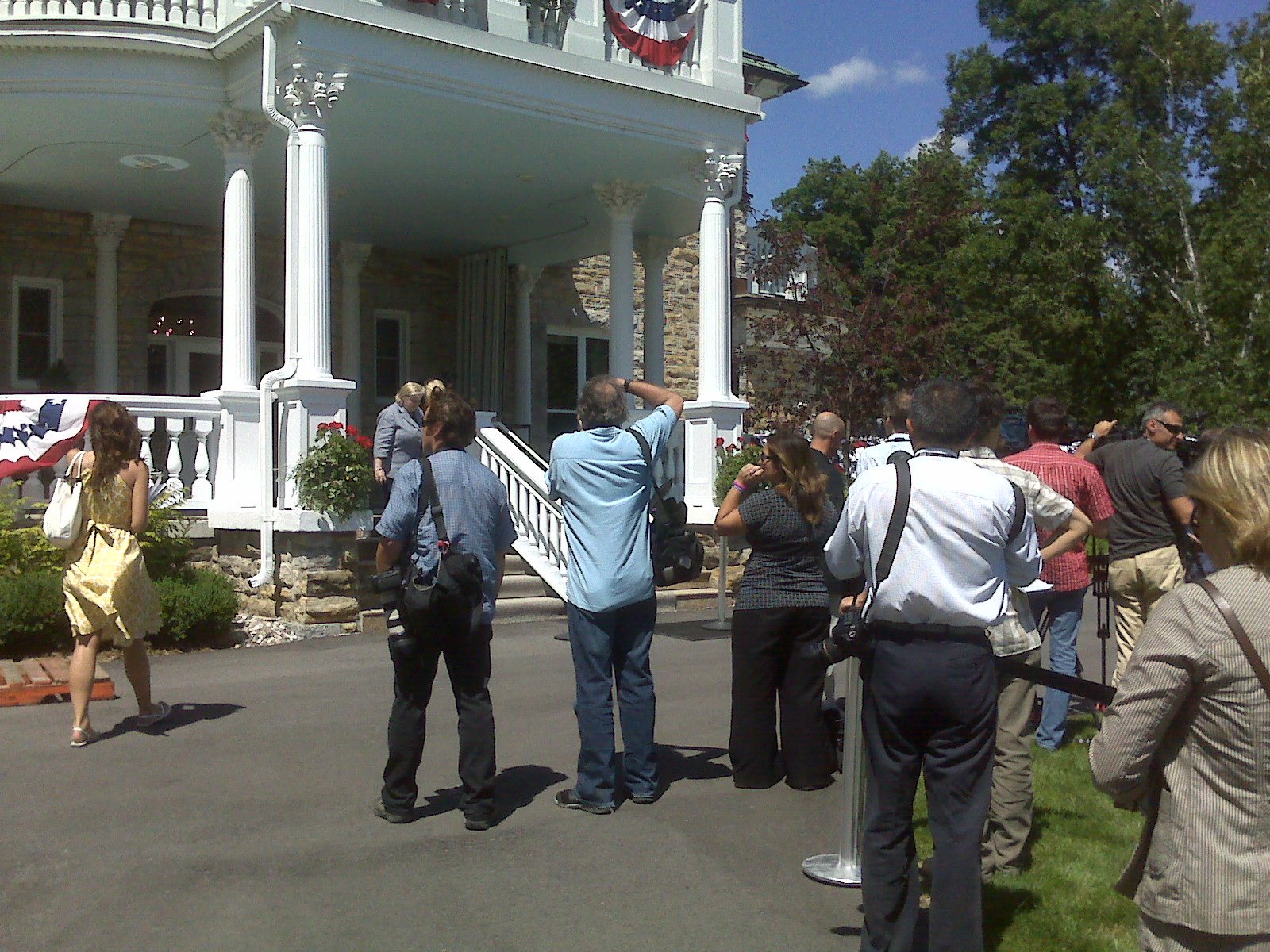 There was a dicey moment during the sweep, courtesy of your humble blogatrix, whose purse aroused considerable wagged-tail interest in the golden retriever on sniffer dog duty. Turns out that it’s probably not the best idea to use the same purse—okay, $1 Loblaws cloth bag; don’t judge me—for covering formal events as you do to, say, tote around liver treats and bullwrinkles for your Boston Terrier. I’ll try to remember that for next year.

Anyway, we’re now lolling on the patio just beside the Ambassadorial verandah, waiting for David Wilkins to show up for a courtesy scrum and listening to the band do a soundcheck.

2:48:17 PM
I just heard my very first South Carolinian accent of the day, from a man wearing suspenders and flamboyantly red socks. 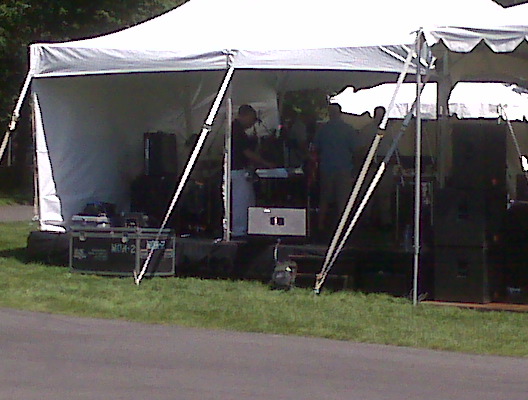 We’ve just been given the programme, which is, not surprisingly, starspanglacious: an airshow, anthems, speeches, tributes and love. Especially love. Also: food! Although that doesn’t happen until after we’ve finished our journalistic duties, which is probably for the best, since we’ll be too stuffed and grease-covered to move afterwards, let alone ask penetrating questions about the issues of the day.

2:54:43 PM
The Ambassador has arrived, and is greeting a group of military officers — American, I think, since he’s hugging them in a fraternal way. “You picked a good time to come to Ottawa,” he says, except he used the word y’all like, four times while doing so. Did I mention I really love Southern accents? So drawling and lyrical. 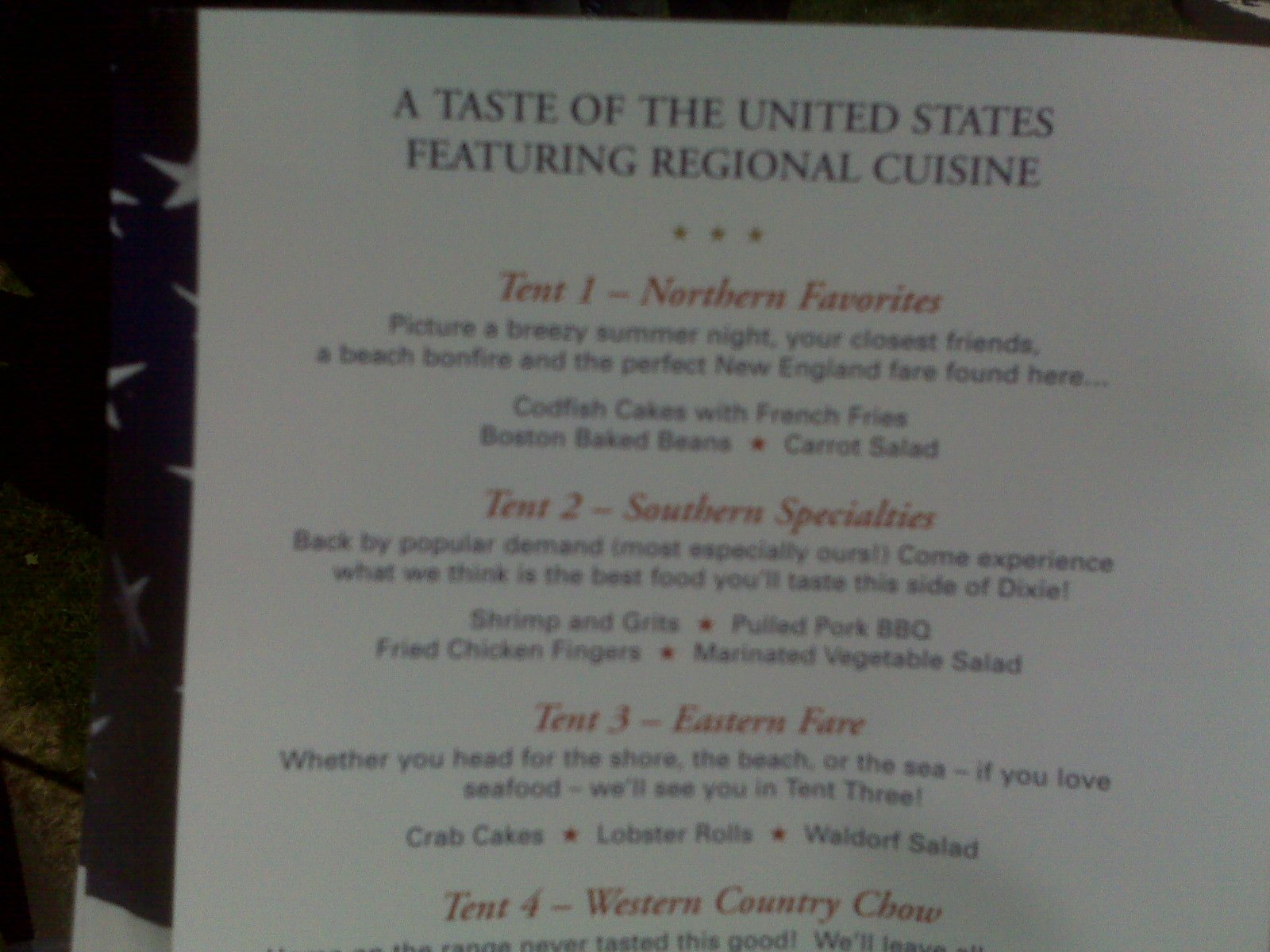 A gentleman in an American flag tie is wandering through the waiting press, inexplicably looking surprised and a little annoyed whenever one asks him if they can take a picture. Really, you don’t wear a tie like that at a Fourth of July party if you want to melt into the background.

3:03:04 PM
One problem with liveblogging from the great outdoors: the sunshine that brings all that wonderful, therapeutic Vitamin D to the world makes it a little difficult to see the screen.

I typed that, and then realized that I was doing so while standing outside, on a perfect summer day, just minutes before being set free to explore six tents full of American regional cuisines; at that point, I knew exactly why people hate us. Don’t worry, I’m over it, and back to being convinced this is the best job in the world. 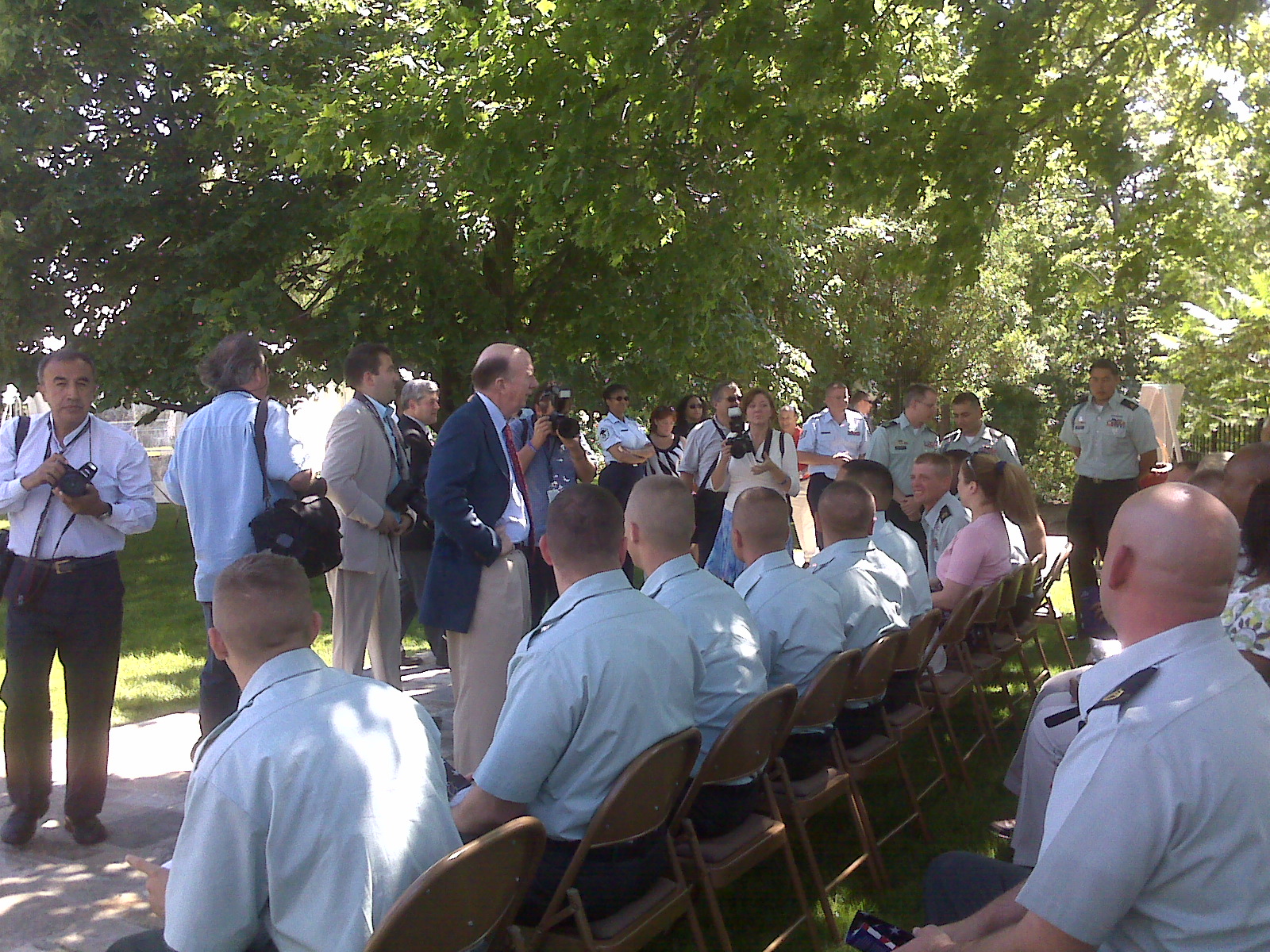 And here’s the ambassador again, in his official capacity, as the host of what is going to be his very last July 4th presser. He’ll be leaving “sometime in the next seven months,” he says—when the next president arrives, but he’ll keep working on that Canada-US relationship until the very last day.

A few examples of the problems solved during his tenure: softwood lumber, mad cow, and the obligatory lauding of the positive relationship between the two countries. Aw, group hug.

3:12:55 PM
The theme of today’s party is a tribute to the “true heroes”—our respective  militaries, Canadian and American alike. “This is all about them,” he says.

3:13:48 PM
And with that, onto the questions. What’s the toughest issue at the moment? Passports. Oh, passports. That was the big issue last year too, if I recall. I wonder how long before someone asks him about the next president, and how quickly he chuckles and doesn’t fall for that old trick—what, you think he’s new in town? 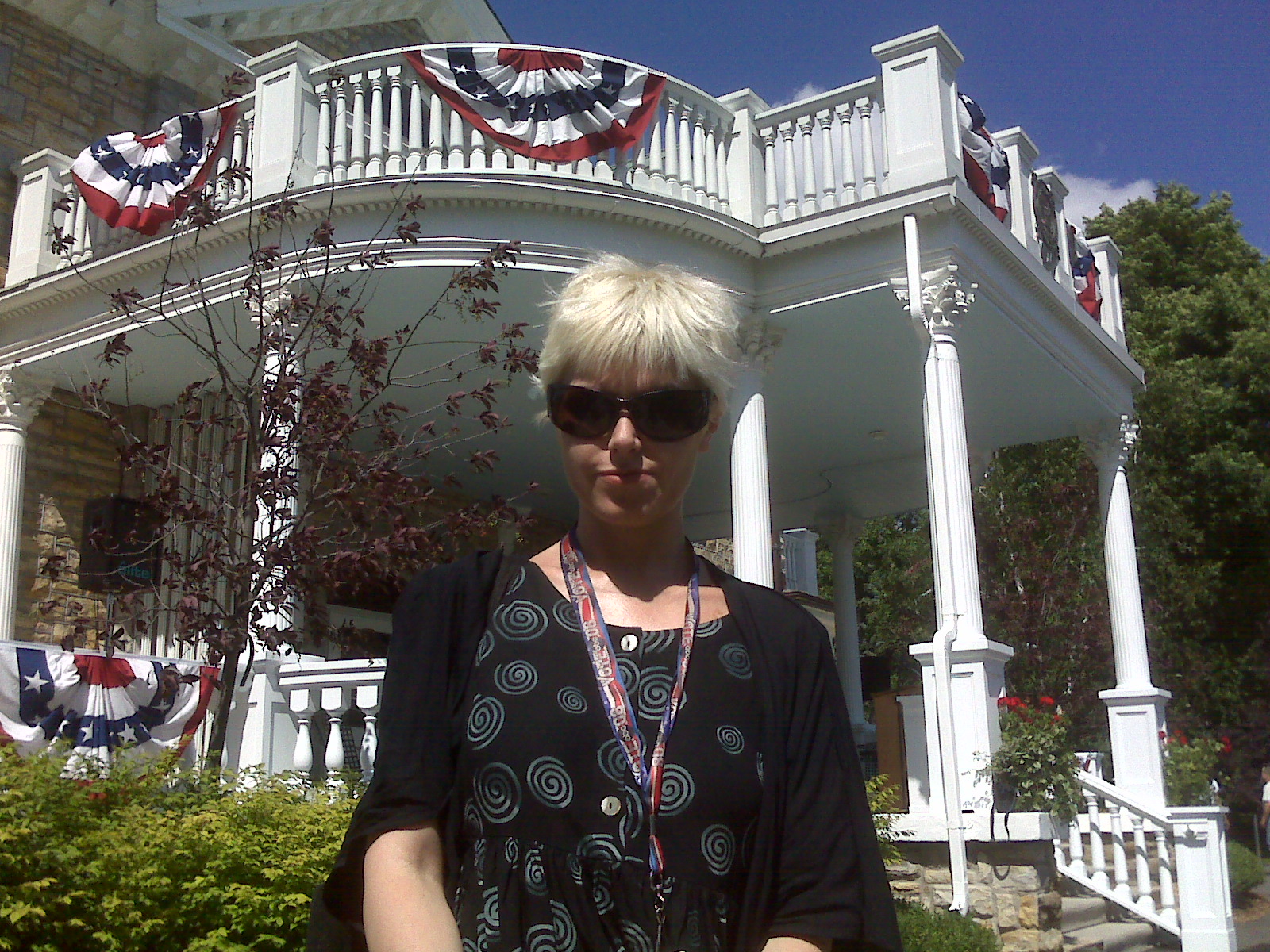 3:15:02 PM
Afghanistan – how long, exactly, ’til the job is done? He defers to the military officials, Canadian and American, but notes that it’s a marathon, not a sprint.

3:15:37 PM
NAFTA—we got anything to worry about up here, what with the fussin’ and the flusterin’ by certain presidential candidates? He thinks NAFTA has been beneficial to all involved and gives a shoutout to the current president for his support.

3:16:42 PM
“I’ll come back and visit you for sure,” he says, when asked about his future plans, to polite (but genuine) applause. He lists off some of the places he’s been: Happy Valley, Quebec City, Dawson Creek (the town, not the WB teen angst drama). Canadians are “warm and friendly,” he says, “and that includes some of you too.” More chuckles. I think we’ve all temporarily turned into Southerners here in the gaggle; we’re so polite and good-natured, and not at all passive aggressive.

3:18:29 PM
Finally, a presidential question. What will the relationship be like for Canada, if it is Obama or McCain? He’s not here to say one will make a big difference or not; the relationship is so strong that any change in the White House or the Prime Minister’s Office won’t affect that closeness. Take that, Guy Giorno!

3:28:21 PM
Okay, time for a brief break in the blogging – this is the intermission between the photo-op and the official program, so I’m going to take advantage of the lull to watch the guests arrive and drink a Diet Coke. Back in a bit!