The NY Times just come out with their green gift guide. You can see it here:

What always annoys me about these gifts is that some are utterly ridiculous – clunky, ugly and a little pointless. If you really want to go green, your best bet is to buy gifts that people actually want. If you feel particularly worthy, why not give to charity? Or you could even try making something, like the Brangelinas, who just announced that they make gifts for each of their six kids, pushing them deeper into the realm of annoyingly perfect.

Whatever you do, please don’t hand out the mountains of pointless gifts just because they seem like they might help the environment. One Christmas, I once received a solar powered flashlight. It couldn’t store much charge, so the flashlight wouldn’t work in the dark, which was the only time I actually needed it. The next year, I received a wind-up radio. To make it work, I had to furiously turn a pedal, which would make a low-pitched wheeze. Listening to the radio was not only noisy, it would require far more arm power than I could muster. Needless to say, both these gifts ended up in the Salvation Army with all the other mountains of tasteless chintz lovingly bestowed every year.

Finding green gifts is a particular challenge, but there are some objects that are useful and far too cool to end up in the tasteless gift pile, and given that Christmas is fast approaching, I thought I’d share:

1. If you’ve ever used a reusable battery, you’ve probably already noticed their biggest downside – they don’t last as long as regular batteries. You could carry a battery charger on your person, or even a piece of brick, since they are both about as equally clunky. This nifty battery solves that problem since it can be charged at a USB port. 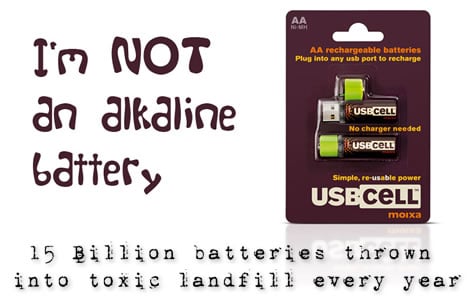 2. I often advertise my absent-mindedness by leaving my bike lights on. These lights can’t help forgetfulness or stupidity, but they eliminate the need for batteries since they run on pedal power. One minute’s cycling translates to 90 minutes of light. Check them out here

3. Massages are green since the receiver always ends up with something they like, unless they are haptophobic, in which case, maybe a therapy session would be of more use.

4. Wrap Your Presents in Newspaper. I started doing this when I ran out of wrapping paper, but then I realized it was a brilliant solution to the glitzy, corny wrapping paper I usually buy. To avoid looking utterly lazy, I often decorate the newspaper with a glitter pen, which makes me look almost artistic.

5. You’ve probably heard of the Frietag bags (made with recycled tarps), but have you heard about Vaho? These two Barcelonan designers reuse advertising banners. The result is striking, colourful and utterly original.

6. Montauk is a Montreal-based company with branches across Canada and the United States. It makes elegant upscale sofas, tables and chairs. They emphasize simple and subtle forms, rather than flamboyant fabrics. They practice closed loop recycling, which means they either reuse or compost every part of their furniture.

7. Modern Weave rugs are organic, sustainable, artistic and utterly out of my price range (the smallest rugs start at $500, but expect to pay several thousand for a room-sized one). Still, there’s no harm in hoping…..