A rough road around the Bend

THEN: (Revelstoke) For decades, the Rogers Pass was considered impractical for a highway, thanks to its mountainous terrain and heavy snowfall. 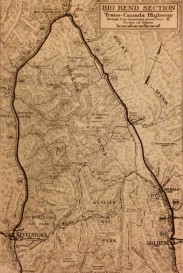 In the 1930s, when the government committed to building a road across the Rockies, it preferred the Big Bend route that followed the Columbia River north from Revelstoke in a 300-kilometre loop back down to Golden. The road was built at great cost and mostly by pick and shovel, taking 11 years to construct through the Depression before it opened in 1940, not quite complete. But it was never very good – narrow, dusty, corrugated gravel and little scenery to speak of, except dense stands of cedar and the occasional glimpse of the river. Most drivers avoided it, instead putting their cars on the train that ran through the Pass.

Journalist Bob Metcalfe once described a drive in 1960 in which he “joined a motoring fraternity whose Big Bend stories improved with age.

“They’re stories of broken springs, shock absorbers, axles and nerves; cracked windshields, lights, sumps and composure; lost tailpipes, mufflers, hub-caps and reason. Skeletons of cars, stripped of worthwhile parts and abandoned after major mishaps, lie forlornly at intervals by the roadside; others that went over steep embankments lie where they came to rest, battered wrecks…”

And so, instead of continuing to maintain an untenable highway, the decision was made in 1956 to build the new Trans-Canada through the Rogers Pass. The initial budget was estimated at $22 million for the 143 kilometres of road, though after seven years — two years longer than expected—the total cost came in at about four times that, or a million bucks a mile.

As Daniel Francis describes in his excellent book A Road For Canada: “The challenges of the Rogers Pass section were many. The site was isolated. Weather was unpredictable. Terrain was steep, criss-crossed by deep gorges and prone to landslides. Workers got used to blasting a stretch of right-of-way only to have it buried under a new pile of rubble cascading down from the slopes above.” 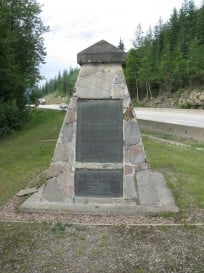 The road through the Rogers Pass was officially opened 50 years ago yesterday by B.C. Premier WAC Bennett. He and the Alberta minister for roads cut a ribbon across the highway about 13 kilometres east of Revelstoke, and declared the road open. According to the Revelstoke Review that week, “An actual count of those around the ceremony placed the number at close to 3,000. In addition, it was estimated that 30,000 people were in the seven miles of cars lined up two abreast on each side of the ribbon, waiting to get through.”

Most important, though, the newspaper account went on to add: “Tourists who lined the highway in the miles of procession breathed a sigh of relief when the minister of highways announced at the official opening that the highway would remain open.” For as I wrote yesterday, the Trans-Canada itself was scheduled to open five weeks later by Prime Minister Diefenbaker at a ceremony on the summit. Officially, Bennett held the provincial ceremony early because he would be unable to attend the national event; unofficially, BC and Ottawa were arguing about money. Like anything ever changes.

At that federal ceremony on Sept. 3, the local MP welcomed the distinguished visitors and made the pointed observation that 347,000 people had already entered the park in the 33 days since the road was opened. I’ll bet that went down well.

NOW: (Revelstoke) Mayor David Raven says the traffic safety issues of the two-lane Trans-Canada in his town are starting to become personal. On average, seven people are killed every year on this section of the highway up to the summit of the Pass, and it’s due to excess speed, driver fatigue, and the design of the road. 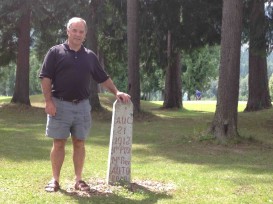 “Living on the highway, we service it but we also have to pick up the carnage,” he says. Last fall, when Raven realized that four people had been killed on the road so far that year, he says he braced for the news of the next three to die and sure enough, a mother and her two children were killed when their car was flattened by a semi-trailer. The road becomes narrow and slippery when there’s snow built up on its sides, and the drivers just run out of room to avoid accidents.

“I made a presentation to the premier just this morning about it,” he told me over coffee. “I asked her for a commitment to the highway. It’s not for us or the city, but for the skiers who come to visit.” There are 2,000 to 3,000 skiers driving the road every day in the winter, sometimes up to 10,000 in a day. On average, 12,000 vehicles drive the road every day throughout the year, with more than half of them being commercial traffic. Those are far more than the highway was designed to carry.

Ideally, the road will be twinned to four lanes all the way through, as it is on the prairie and through Quebec, New Brunswick and Nova Scotia, but the cost is excessive in this mountainous region: roughly a billion dollars, and that’s just the section from Revelstoke to the summit.

So what did Premier Christy Clark say to the mayor’s request? “She said, ‘Thanks Dave,’” he sighed. “It’ll be costly to build it, but it has to be rebuilt and maintained anyway. The money should be spent now to get it right.” 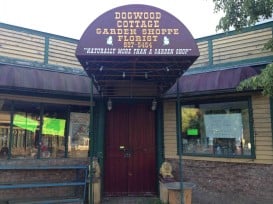 “Stoke list”? This made no sense to me. Nor would it to Tristan, but I asked him anyway, since he’s 12 years old: “Hey – what do you think the ‘Stoke list’ is?”

I can’t bring myself to check if there’s a commercial website for Revelstoke but I’m sure there is. And did I mention yesterday  that I just turned 50?

SOMETHING FROM TRISTAN, 12: (Revelstoke) Today I didn’t really do anything. I woke up, had a shower, got in the car and drove to Revelstoke and that’s pretty much it.

So what I’m going to do is show you a bunch of pictures of the Rockies to let you see some stuff we’ve been seeing. 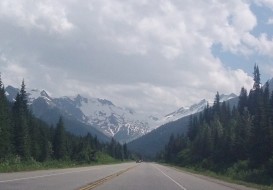 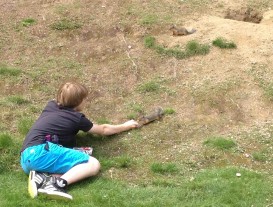 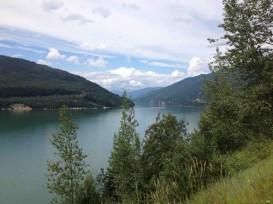 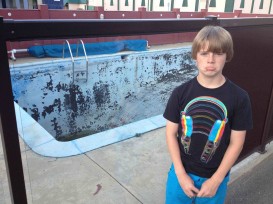