A safer highway, and looking for Punch Buggies

THEN: (Medicine Hat) Stan Sauer used to be the president of the Alberta twinning association for the Trans-Canada Highway. This is going back a few years – the retired GM auto dealer remembers that it was back in the early 1970s that the association was pressing for the two-lane TCH to be expanded to a four-lane highway, with a wide, grassed centre median. 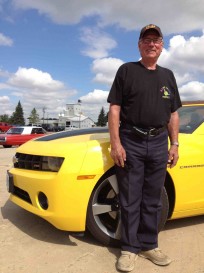 This is significantly safer for motorists: any accidents or collisions take place among traffic that’s all headed in the same direction, avoiding the deadly impact of oncoming vehicles.

He recalls that Alberta was the first province in Canada to begin twinning its highway – a relatively straightforward project since land is plentiful and, with the exception of the western mountains around Canmore and Banff, it’s fairly flat and easy to build a road upon. The extra two lanes spread east and west from Calgary and were finally completed in the early ’80s, making Alberta the first province to finish the four-lane TCH.

“We had the official opening but I’d hurt my back and had to phone in my comments to the ceremony,” says Stan. “It was a great moment, though. The Trans-Canada had been like a goat trail in the beginning but when it was twinned it became a proper highway. As far as we were concerned (in Alberta), it was done then. Everything since has been maintenance.”

NOW: (Calgary) The Trans-Canada used to pass directly through the downtown areas of the communities along its way; the local merchants lobbied for this. In 1962, as I wrote about in Prince Edward Island last month, it went right through Charlottetown, coming to a halt at the lights in front of Province House. In Montreal, the Trans-Canada ran down St. Catharine Street in the centre of town.

This may have worked for the tourist traffic, but it was a disaster for the increasing truck and commercial traffic, which has grown ever since the scaling back of the railroad system and the advent of Just In Time deliveries. Consequently, the provinces have been building bypasses to move trucks outside of town. 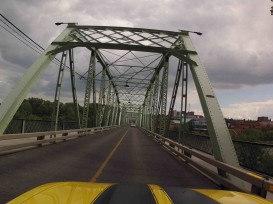 The Finlay Bridge in Medicine Hat

Medicine Hat is a good example: the Trans-Canada used to cross the river over the narrow Finlay Bridge close to City Hall, but for a long time now it’s been on a bypass to the south that keeps all through traffic out of the core.

In some communities where the road is smaller and the traffic lighter, it still passes through town: in Mattawa,  for example, there’s been talk of a bypass for years but few people believe it will happen in their lifetimes because the return doesn’t justify the enormous expense. Sudbury, however, is more typical of a city building a costly bypass system to ensure that trucks and through traffic stay out of downtown.

But out West, both Winnipeg and here in Calgary are proud exceptions. They both have excellent bypasses, but they still route the TCH right through the centre of town. Truckers know which route to take. While other communities have redesignated their bypasses to be the new Trans-Canada, neither Winnipeg nor Calgary have changed the name. Good for them.

SOMETHING DIFFERENT: (Calgary) Ever since my son joined me on this journey a couple of weeks ago, he’s been bashing me on the arm every time he sees a Volkswagen Beetle. “Punch Buggy!” he calls out. “No punch back!”

I think he spends his whole time in the passenger seat looking for punch buggies, and he always seems to spot them first. When we found the VW Beetle limo in Sturgeon Falls, Ontario, which I wrote about here, he really went to town on my arm.

So when Tristan fell asleep today in the car and didn’t notice the VW Beetle parked beside the road when we were in Calgary, I took a photo of it for later. “Hey, look what I saw today,” I told him when he woke up. He looked at the picture on the iPhone and I saw the recognition come to his eyes, then he started to turn at me in his seat but it was already too late. “Punch Buggy! No punch back!” I called gleefully. Revenge is sweet.

SOMETHING FROM TRISTAN, 12 (Medicine Hat): Today was a very exciting day because we paid a visit to the Medicine Hat art place thingy (DAD’S NOTE: This is Medalta Potteries, a working pottery and ceramics business in the city’s Clay District that has a beautifully restored factory and museum). 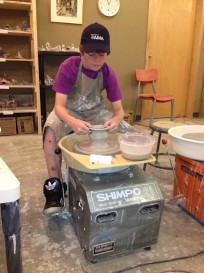 The creation of Poto de Tristano

The mayor presented me with a Medicine Hat Tigers hockey jersey and I also had an opportunity to make a pot at a pottery wheel. My pot is a sort of abstract creation that I call Poto De Tristano.

We were also given a tour of the whole building and told many stories of how it burned down and other stuff like that. It was actually quite a cool place, and if I was an artist I would definitely want to work there.

Tonight we are in Calgary, Alberta, and so we will be for the next two days. Tomorrow we have a whole bunch of fun stuff planned but I don’t want to spoil anything for you so I’ll keep it a secret for now. Today was great and from now on I think it only gets better.