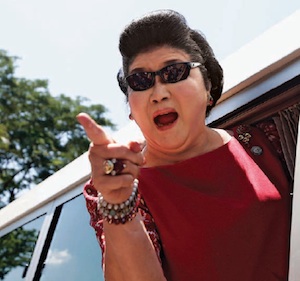 Former Philippine first lady Imelda Marcos—known for her extravagant lifestyle and thousands of shoes—is campaigning to hold onto her congressional seat in the May 13 elections.

Marcos, who represents a district in the family’s home province of Ilocos Norte, fl ed the Philippines with her husband, Ferdinand, after he was ousted from power, leaving a horrific record of human rights abuses and corruption.

The so-called Steel Butterfly, who returned from exile in Hawaii after her husband’s death in 1989, first ran for office in 2010, and heads up an unlikely political dynasty: her daughter governs a province and her son is a national senator.