A Trans-Canada Highway we must take for granted

After driving from one end to the other, Mark Richardson reflects on the beauty of the THC

NOW (Cobourg): Last month, halfway through this Trans-Canada journey, a journalist asked if I’d had the “aha!” moment yet. That gave pause for thought, but I had to accept it had not yet hit.

In fact, it took right up to the last moment of the drive before it struck in Victoria, at the end of the highway. 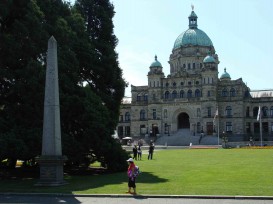 As I mentioned in the previous entry here, when Thomas Wilby in 1912 completed his All-Red Route in the REO and had just been feted in Victoria, he wrote that he “strolled out under the stars to the Douglas obelisk in the Parliament Grounds… Sir James Douglas, who had pre-visioned the day when vehicles would make the crossing of the Canadas to the Pacific!”

So after writing that late-night blog entry from the comfort of a hotel room beside that same provincial legislature, I decided to copy Wilby and stroll next door to look at the obelisk under the stars. Downstairs in the lobby, I asked the night manager where on the grounds the Douglas obelisk would be. He looked at me blankly. He Googled it with no success. He shrugged. “Maybe if you ask security there, somebody will know,” he suggested. “Perhaps it’s inside and you’ll need to wait till morning.”

I walked next door anyway. It was after midnight and the city was quiet, but the Legislative Building was lit up like a Christmas display. And right in the front, just a step from the sidewalk at the very centre of the grounds beside a grand Sequoia, was a 7-metre-tall obelisk in memory of the former B.C. governor Sir James Douglas.

Back at the hotel, I mentioned this to the night manager. “Of course,” he said. “I can see it now. I see it every day. I just take it for granted, I guess.”

And like Douglas’s vision, that’s the Trans-Canada Highway in this new millennium: long dreamed of, roughly achieved, and now taken for granted.  Of course there’s a highway across the country – why wouldn’t there be? 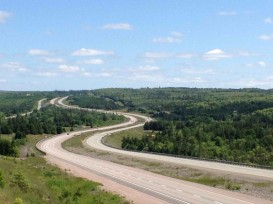 The Trans-Canada in Nova Scotia

Most of the people with whom I’ve talked about the Trans-Canada over the past few months are surprised to realize it’s only 50 years old. Very few can appreciate the challenges of driving across the country before it was built. Nobody can imagine a country without it, though they may not use it themselves for more than a local trip. But that’s the beauty of the TCH: In a nation as varied and regionalized as Canada, it has a different relevance for everyone while still providing a connection that’s more than just a strip of asphalt.

In Newfoundland, it’s the road across the province. In Grand Falls, a woman told me that “I use it all the time just to get anywhere. But my sister, she lives in Canada and she only drives it when she comes to visit me here.” By “in Canada,” she meant on the mainland, in Ontario, where roads thread everywhere. Then she thought for a while, and added, “I guess I’d use it to go visit her, too.”

In New Brunswick, it’s a fast and wide four-laner that hustles cars and trucks safely between the Maritimes and the rest of the country. The highway is very well built because it was always going to be a toll road, paid for by the truckers and tourists. Then politics got in the way and New Brunswickers have been paying for it ever since.

In Quebec, it’s the road to the Gaspe, again fast and wide through the flatland south of the St. Lawrence but an afterthought for the short stretch south-east of Riviere-du-Loup into New Brunswick. That’s changing now at great expense as the traffic fatalities of a two- and three-lane road can no longer be ignored and an all-new highway is being constructed alongside the old. It’s also the road to the north, for the TCH splits at Montreal to lead both to Ottawa and up to Val d’Or. “No it doesn’t,” argued the man at the transport ministry, incorrectly, when I asked about this. “Ask anyone in Quebec and they’ll tell you the Trans-Canada is the road to Ottawa.” Read into that what you will. 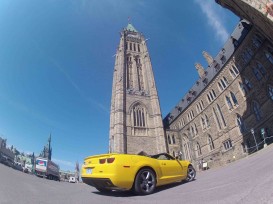 At the Peace Tower

At Ottawa, the highway again splits and becomes less relevant for the first time since leaving the east, replaced by the utilitarian Hwy. 401 to southern Ontario. Instead, the TCH here is a tourist road, the old route from Ottawa to Toronto or to North Bay, good for Sunday drives and antique road shows. Most commerce from the west is with Toronto and the Trans-Canada is more of a state of mind than a means of transportation, literally sidelined by the busy 400-series highways. That’s okay. There should be some romance left for an icon.

It plugs through the woods of northern Ontario where there are three separate highways each claiming the status of our national road: the traditional scenic route along the north shore of Lake Superior that’s paralleled by the original logging route through Kapuskasing, and the southern border route that connects Thunder Bay to Rainy River, as well as the traditional route that winds beside Kenora. Here, the Trans-Canada is Everyroad, the only asphalt connection to the rest of the world.

When the woods and rocks give way to the flatland grass, the highway takes a deep breath and plunges across the prairie, running straight and wide as a cowboy belt all the way to the mountains. It’s the working link that connects the west, replacing the railroad in importance and general use. It splits in Manitoba and heads through both Calgary and Edmonton on its route to the ocean. People live alongside, even between; the median itself is farmed for hay. 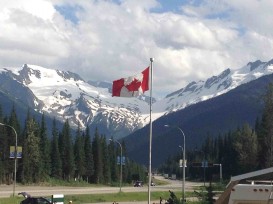 And then, in British Columbia, it heads high over the mountains of the passes at Kicking Horse and Rogers before reverting again to a tourist road west of Kamloops, bypassed by the more direct Coquihalla. When the current Coke was opened in the mid-1980s, traffic on the Trans-Canada dried up as if a switch had flicked it off. Now, the volume of cars on the winding road is more like the original designers expected it to be.

Finally, on Vancouver Island, the highway slows into a morass of stoplight-controlled intersections – about as many as in its entire length elsewhere – on its route south to Mile 0 at Victoria. Here, the road is the only route to Victoria without taking another ferry and it crosses the mountain on the same short stretch of the Malahat Highway that was opened in 1912, when the Trans-Canada was first proposed.

So is it now all that was hoped for when Abert Todd ordered a medal struck, and its creation was anticipated within the decade?

Of course it is. It’s not a soulless interstate, good only for getting places fast on the superslab. Nor is it inadequate and poorly-maintained, though it’s frequently sub-par. It has its challenges but it’s overcome them in the most Canadian way possible: with lots of federal-provincial bickering, plenty of committees and discussion and a fair amount of back-room dealing, all dragged together through the blood, sweat and gears of super-human physical construction by normal people to change our country for the better.

The Trans-Canada Highway is the only link in this country that we can actually touch, that connects every province and is accessible to anybody, whenever we want it. And like peace and democracy, we must be able to take it for granted – it’s part of being Canadian.