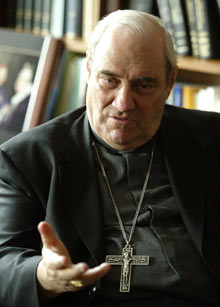 Cardinal Jean-Claude Turcotte is a man of honour and principle, and it would be nice to think it was because of this that one of the brightest lights of Canadian Catholicism – a man who helped install the current pope, no less – renounced his Order of Canada membership yesterday. Cardinal Turcotte was incensed that the same honour was given to abortion enabler Henry Morgentaler, and in returning his badge he stood fast to his beliefs and those of the church he represents.

Here’s the thing, though, Your Eminence: news of Morgentaler’s Order of Canada membership came nearly three months ago. Mind you, those were the dog days of summer, when the current election was just a bad smell in the air, and when your resignation from the Order would have been but one piece to chuck into the week-long newspaper-and-pundit grist resulting from Morgentaler’s appointment. (Yes, I know, you were on vacation then. Newsflash: They have phones at Rideau Hall. Methinks you probably would have got through.)

Surely His Eminence did this because he has a legitimate opposition to abortion. Surely yesterday’s announcement wasn’t a ham-fisted attempt by a powerful non-elected official to foist the abortion debate onto the current political campaign. Surely not, because that might explain why people are cynical about the church these days. God forbid.