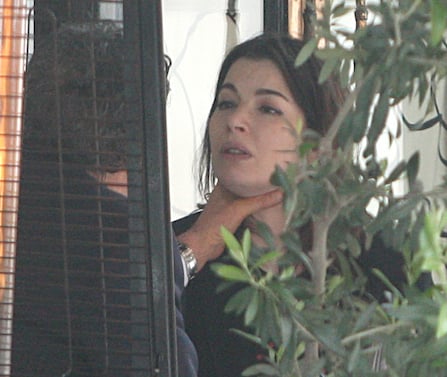 Celebrity chef Nigella Lawson, 53, has “left the family home with her children,” a spokesperson says, after photographs emerged showing an argument at a London restaurant during which her wealthy husband grabbed her throat four times. Concerned onlookers reported Lawson was “tearful” and looked “scared.”

Charles Saatchi, a 70-year-old art collector and co-founder of the famous Saatchi & Saatchi advertising agency, told to the Evening Standard (where he is a columnist) that the photos left a “far more drastic and violent impression” than what happened. He said Lawson took the children away to avoid paparazzi.

“About a week ago, we were sitting outside a restaurant having an intense debate about the children, and I held Nigella’s neck repeatedly while attempting to emphasise my point,” he said. He described it as, “a playful tiff,” and added, “Nigella’s tears were because we both hate arguing, not because she had been hurt.”

Lawson spoke to Maclean’s in February about her latest Italian recipe book Nigellissima.