All hail the hockey mom 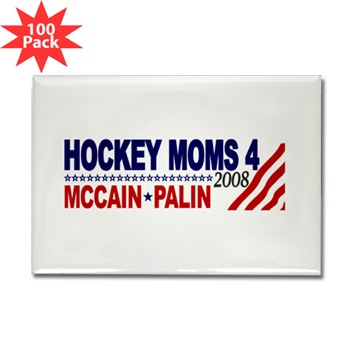 That forest of “Hockey Moms 4 McCain” signs at the Republican National Convention last eve was a surreal and impressive sight. And I have to admit to reflexively wondering whether this was some sort of breakthrough for the game in the United States. Can the GOP do what Gary Bettman couldn’t? Will Sarah Palin and her sisterhood of puckheads usher in a new generation of Levi Johnstons—brushheaded right-wingers who set aside their ball gloves to crash, bang and give 110 per cent?

Then I snapped out of it. Not only is wishing Americans would embrace our national sport lame, it misses the sheer cunning with which the GOP has deployed the “hockey mom” label. This, after all, isn’t about the popularity of a sport. This is identity politics at its subtlest—a dog-whistle slogan that seems folksy enough on the surface, yet carries an encrypted signal to Republican ears about who’s doing the talking, where she comes from and what she stands for.

That message, of course, riffs off the “soccer mom” archetype that served the Clinton Dems so well in the 1990s. A hockey mom is like a soccer mom, a colleague joked to me this morning. Except her kid fights. His little apercu nicely captures the sense of resolve and resilience Palin clearly wants to transmit: the game is tough, and so are the people who like it. Last night, she delivered a canned line about the difference between hockey moms and pitbulls (“pit bulls don’t wear lipstick;” heh), which summoned some unflattering images. But when coupled with her depictions of Barack Obama as a weak-kneed, appeasing leftist, it worked fairly well.

Underneath the overt message, meanwhile, is a big shout out to the Republican base, which had been floundering in the backwash of Obama-mania. And for this purpose, the limited interest in hockey south of the border actually helps. In the U.S., more so than Canada, hockey remains the sport of the blue-collar suburb or the small-town north, so claiming it as your own defines you in a way that declaring your devotion to football never could. And it’s all about impressions. If the soccer mom is the woman on the sidelines of a manicured sports pitch, wearing Geox trainers and sipping a venti soy latté, the hockey mom is the one dunkin’ her donut at a rink on the edge of town, or slipping outside for a smoke. The soccer mom spends her kid’s grad year prepping her youngster for college. The hockey mom spends hers prepping for a shotgun wedding.

If that seems harsh, consider what we witnessed last night: a regular family, in just such a position, feted by a party that has held White House for 20 of the last 28 years. How did that happen? I mean, it’s not like the Republicans don’t have their own élite. Yet here there were waving around “hand-written” hockey mom signs that looked suspiciously mass produced, for a woman they probably would have deemed unsuitable in previous elections. Answer: they caught an intoxicating whiff of voter defiance, which has been known to turn elections against all odds. Sarah Palin’s unapologetic celebration of what she is has allowed the GOP’s most loyal supporters to feel good again about who they are. Her status as an outsider offers a credible challenge to Barack Obama’s reform-based message, and her tint of hickishness provides a pleasing contrast to his pre-packaged perfection. More importantly, she has given the GOP a flag to rally around at a time when John McCain, for all his heroism and pretensions to being a maverick, wasn’t getting the job done. In this context, “hockey mom” isn’t an epithet, it’s a battle cry.

What a change. I remember a radio morning man in Toronto denigrating the suburb of Brampton, Ont. a few years back as a bleak landscape of housing developments and “hockey moms with broken hair.” Well, there’s nothing wrong with Sarah Palin’s hair. Whatever else is wrong with her appears to be just the fix the Republicans needed.