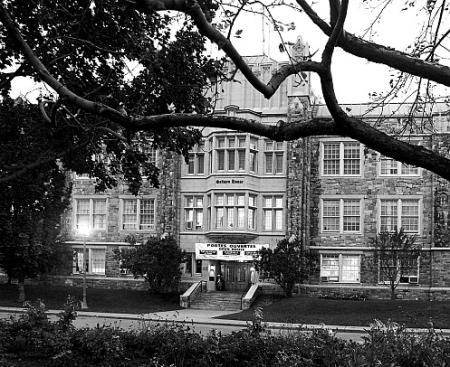 Westmount, so the story goes, is Quebec’s last great English bastion, a leafy and gilded little burb chock full money and privilege, a handy bogeyman for a generation of sovereignist leaders. René Lévesque likened it to “White Rhodesia”, and Westmount paid him back in kind. To this day, Boulevard René Lévesque, so named after the premier’s death in 1987, ends at Atwater to become Dorchester Boulevard as it enters into Westmount’s hallowed acreage.

Everyone, especially little White Rhodesians, needs to be properly educated, and you can’t really get anymore rich English bastion-y than Selwyn House School. It is named after the University of Cambridge’s Selwyn College. In its early days the school had a tradition of being more British than scones and the beating stick–both of which were served up with gusto in its early days. (Full disclosure: I’m a graduate of the school, albeit well after the beating stick was retired.)

Bit of surprise, then, that Selly recently celebrated its 100 years by adding to its school hymn a verse… written in French. Gadzooks!

The hymn is most school assemblies, and is integral part of its history. (Assemblies end with ‘O Canada.’ Take that, René!) It’s Church-Of-England boilerplate stuff, as far as school hymns go, stressing the supremacy of God and the importance of fighting a good fight and all that. The new verse, written by two French teachers at the school, is an ode to the school itself. I sang it to myself and immediately got a migraine and a flashback, so I guess it works. “We are a school that does things in a bilingual fashion,” Elementary School Director Kathy Funamoto told me. “Certainly over the last 30 years we’ve worked to make French part of our day. It’s part of our culture and who we are.”

Huh? French is part of our culture? That doesn’t sound very Rhodesian, does it? What’s next, tourtière for lunch?

Neither does this: since 1999 students spend 80 percent of days learning in French from kindergarten to grade two. From grade three to six it’s 50 percent. Well rounded, bilingual students coming out of Westmount. Take that, René!

(Sadly, some clichés die harder than others.)