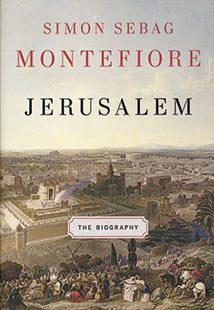 “The romantic image is far more vivid” than any verifiable facts. Montefiore is talking about Jerusalem in the time of King David, but it could just as easily apply to all of Jerusalem, the story of the world’s most legendary city from Biblical times to the Six Day War of 1967. Though it’s a linear history, the book frequently changes perspective depending on whose story dominates Jerusalem at a given time: early Jews, Christians or Muslims. Entering the 20th century and the Zionist era, we see how the city has been central to religion and politics for hundreds of years.

Since Jerusalem is so closely bound up with those three great religions, early sections of the book sometimes leave a lingering doubt about which stories are real; as Montefiore notes, the Gospels are the only source for the story of Jesus’ crucifixion, although “no faith is required to believe in the life and death of a Jewish prophet.” And yet the legendary aspect of Jerusalem is what shapes the history in the rest of the book; “The writers of the Bible created their narrative of Jerusalem,” Montefiore writes, and that narrative became the thing that people around the world fight, crusade and die over.

Montefiore has so much ground to cover that complicated stories like the Balfour Declaration take place in only a few pages. But the fast pace helps convey just how quickly things change in the city, and how many times the balance of power has swung. Because the book rarely lingers on one movement or religion for very long, it has a more objective feel than most books about Israel; the main character, as the term “biography” suggests, is the city itself.