At the Olympic Park, and remembering a great author

THEN and NOW: (Cochrane) In researching the Trans-Canada Highway during the past year, one name and source kept cropping up: Edward McCourt, the author of the 1965 book The Road Across Canada. 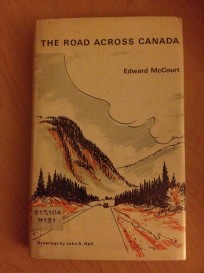 The Road Across Canada

McCourt and his wife, Margaret, drove the highway from St. John’s to Victoria the summer after it opened, when much of the road was still to be completed. The journey and its subsequent chronicle was commissioned by publisher Jack McClelland, who knew McCourt as a talented writer and meticulous researcher and the author of a series of novels set on the prairie.

Little else is known about him though, and especially now. He was a professor of English Literature at the University of Saskatchewan in Saskatoon, but his novels sold only a few hundred copies at their best and after he died in 1972, he slipped into near total obscurity. This is a great shame, because his Trans-Canada book is both insightful and inspirational, and his writing is as fresh and witty today as when he and Margaret were slogging along the two-lane gravel road. Consider this, describing a detour from Calgary along the old Banff highway, Route 1A, known as the Banff Trail:

The view from Cochrane

In some respects the old highway is even more scenic than the new – at certain points it affords a broader panorama embracing the entire sweep of the Bow Valley and the mountains beyond. One of the finest views in all Canada is that from the turn-out at the top of the great hill above the village of Cochrane twenty miles west of Calgary – a magnificent expanse of river, valley, foothills, mountains, and overarching sky juxtaposed in a flawlessly balanced harmony, so flawless as to suggest a deliberately contrived artistic improvement on nature. It is a view of which no man can ever tire, for although the elements are fixed, permanent, the colour- and cloud-patterns change minute by minute so that the communicated effect is of something at once enduring and at the same time forever new.

I drove out to Cochrane today, partly to see that view but mostly to meet with Edward McCourt’s son Michael, who now lives there. Michael is a retired television journalist and foreign correspondent – most recently the anchor of City TV’s breakfast show in Calgary – and he was pleased to meet with me to talk about his dad. 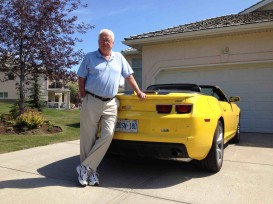 “There’s been a glimmer of interest in the last decade,” Michael told me. “Some people have asked, ‘Who was this guy? And could anyone so prolific actually be any good?’”

Part of the reason for McCourt’s lack of sales success was, in Michael’s words, that his dad had “almost pathological shyness,” unwilling to promote his books in person but preferring to let the writing stand for itself. In other respects though, McCourt was tenacious and committed: he studied for high school while working full-time on his parents’ prairie farm and went on to become both a Rhodes Scholar and an exceptional athlete, accomplished in the heavy sports of discus and shot putt. “His greatest expression was through his writing,” explained Michael. “His last communication to me was with a note. He couldn’t talk to me to tell me that he loved me, but he could write it in a note. It’s how he was.”

The Road Across Canada was published in the same year that McCourt found a small canker on his tongue, which was cancerous and would kill him within seven years. In that time, though, he wrote and published travel books about Saskatchewan and the Yukon, and a biography of British army officer Sir William Butler. When he died, remembers Michael, he had just returned from Ireland, working on a biography of poet W.B. Yeats.

Michael has copies of all his father’s books and has read them all, as has his daughter Tracy, a fine arts major; he also has a “big box” of his father’s letters and unpublished writing in his basement, some of it too personal for him to read easily, which Tracy will inherit one day. Could there be another book in there? “I don’t know, but I think so,” Michael says. “I hope so.”

Tristan and I will be driving finally into the mountains tomorrow, so let’s leave the last word with Edward McCourt, who loved the prairies with committed passion:

The plainsman like myself is likely to find his first plunge into the mountains on the Calgary-Banff run an alarming experience. Not because of the Highway gradients, which are gentle, nor the curves, which are also gentle and well-banked, but because of the sudden feeling of being separated from all familiar things. Before we are aware of what is happening the beautiful but sinister Three Sisters and assorted kinsfolk have slipped in behind us and cut off our retreat. But the valley ahead broadens – there us still room to breathe. We are not yet fenced in. Not quite.

SOMETHING DIFFERENT: (Calgary) Since we’re here in Calgary, and the Olympics opened today in London, it seemed only right to visit the Olympic Park from the 1988 winter games. 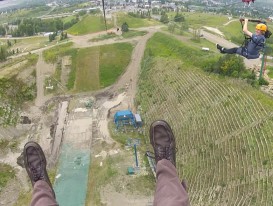 There’s a special deal where you can both ride a zipline down the route of the ski jump and take a bobsled ride down the mountain course, for $99. After throwing myself from an airplane over Moose Jaw and riding a zipline through Eagle Canyon in northern Ontario, Tristan and I could hardly resist.

The zipline was very fast – in fact, too fast. Unlike Eagle Canyon, when I ground to a halt five metres from the end and had to be dragged onto the dock, I slammed into the end much harder than anyone expected. It’s advertised as a 140 km/h ride, but I’m sure I was gong faster than that. Want to see proof? Watch the video here.

I was glad to be able to film the zipline run with my GoPro, where the helmets were fitted with camera attachments. At Eagle Canyon, cameras were forbidden and they told me at length that it’s because the government won’t allow them – they’re too distracting. This is nonsense, of course, as we both knew, but it was their canyon and their zipline and they could make whatever rules they want.

SOMETHING FROM TRISTAN, 12 … (Calgary) In the past two days we’ve done a bunch of cool stuff. We went zip lining and bobsledding and I finally finished off my cross-Canada skateboard. I finished it by buying a new set of Bones wheels.

Zip lining was much better than the one we went to in Ontario because it was a much steeper incline. Although it was better it had one fault. When we went down we dropped a parachute near the end and then pulled our legs up to brake but that didn’t slow us down at all so we hit the end like a car crash and it hurt. So after us, the rest of the people going had to drop their parachutes right at the beginning.

Bobsledding was a lot of fun too. We went 90 km/h around a long track and the turns were almost vertical. 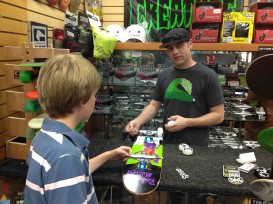 Most important, I finally built my skate board. We paid a quick visit to the skate park afterwards and I had lots of fun.