A leaked menu from a fundraising dinner for Australian Liberal National Party candidate Mal Brough, a former cabinet minister, is so offensive that Prime Minister Julia Gillard is calling for the Opposition to remove its endorsement of Brough in the country’s upcoming election.

The menu from the March 28 event was recently posted on Facebook. One of the items is described as: “Julia Gillard Kentucky Fried Quail – Small Breasts, Huge Thighs & A Big Red Box.”

The photo of menu, below, is being shared on social media. 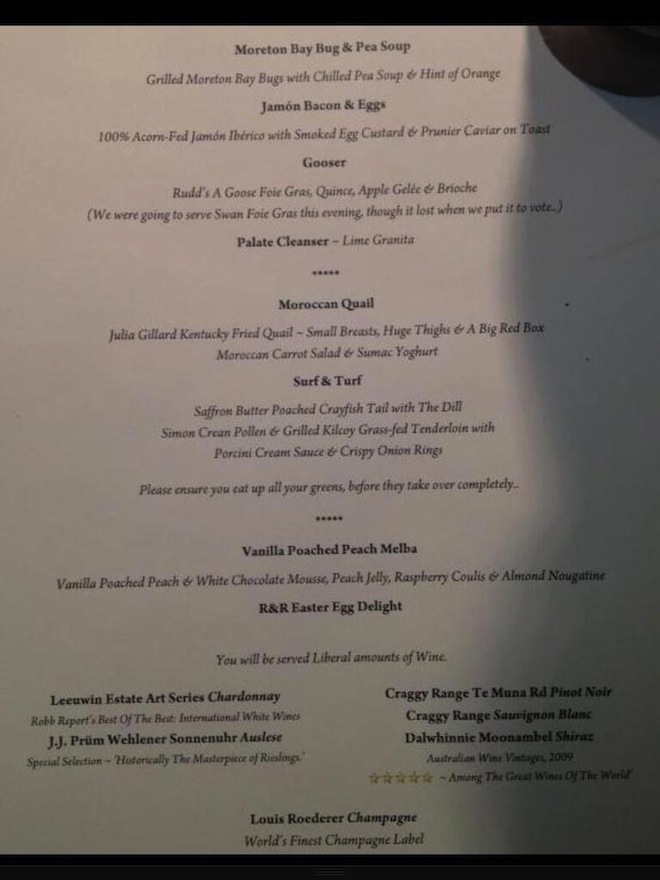 Brough has since apologized for the menu, calling it “deeply regrettable, offensive and sexist,” reports Radio Australia. He said he did not endorse the menu.

A report from the Herald Sun says Brough’s office also released an email that they say is from the restaurant owner. In it, the owner describes the menu as “a joke, never for public distribution.” The email goes on to say the menu was never displayed publicly and: “Unfortunately a staff member saw the mock menu, and unbeknown to me posted it on Facebook.”

Gillard, however, isn’t seeing the joke in the situation.

However, Opposition leader Tony Abbott continues to stand by Brough, though he did condemn the menu and called it “tacky.”

This, Gillard told reporters, was part of Abbott’s “pattern of behaviour,” which had culminated in a “grossly offensive and sexist menu.”

This isn’t the first time Gillard has taken the Opposition party to task for its sexist behaviour. In October 2012, a video of a speech Gillard made in Parliament, accusing Abbott of continued sexist and misogynist behaviour, went viral, amassing more than two million views on YouTube.

Australians go to the polls September 14. The race has been a heated one and the menu appeared on the Internet after Gillard, who represents the Labour Party, was accused of attempting to create a false gender war when, speaking to a women’s group, she suggested an Abbott government would reopen the abortion debate.

“We don’t want to live in an Australia where abortion again becomes the political plaything of men who think they know better,” Gillard told the group during a speech Tuesday.