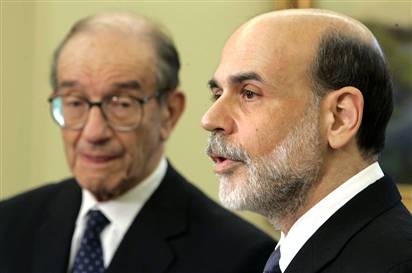 When you’re standing in the midst of an economic storm, it’s hard to see more than a few feet in front of you. The actions officials take to stem a crisis can have deep and profound consequences in the long run, but at the time, they may seem absolutely necessary. Following the Dot-Com crash and the 2001 terrorist attacks, the Federal Reserve under Alan Greenspan slashed interest rates to keep the economy from slipping into a long and painful recession. By 2004, the short-term rate was hacked to just 1 per cent. As we all know now, the move inflated the massive debt bubble that triggered the current economic crisis. It’s a common refrain to say Greenspan kept rates “too low, too long.”

Well, today Greenspan’s successor, Ben Bernanke, threw his support behind a second massive bailout package. That would be on top of $3 trillion in other stimulus measures the U.S. alone has enacted over the last month. So are these prudent measures to stave off a grave financial calamity? Or too much, too fast?