Balloon on the loose blamed for power outage on Vancouver Island 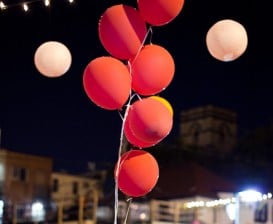 Nearly 2,000 residents in the city of  Duncan on Vancouver Island were left without power over the weekend after a rogue promotional balloon blew away from a car dealership and got caught in a power line.

According to a report from CBC News, the balloon made a break for it on Sunday morning and crews had to untangle the balloon before power could be restored about an hour later.

B.C. Hydro crews had another strange issue to deal with over the weekend when residents on the Ditidaht First Nation’s Malachan reserve, on the southwest part of the island, began to complain of electric shocks both inside and outside homes.

Crews shut off power to the community on Friday, and found that someone had stolen the copper ground wires from 300 utility poles, creating a potentially dangerous situation. The Victoria Times Colonist reports that power was restored to the community late Sunday.